Scientists find that lack of a particular cytokine results in uncontrolled neuronal aging, tau abnormality, and neurodegeneration in aged mice. The discovery deepens our understanding of late-onset Alzheimer's disease (AD), and would one day improve the diagnosis of this form of AD[1].

Prof. Yahuan Lou and his colleagues at the University of Texas Health Science Center at Houston previously demonstrated in mice that loss of IL-33 (Interleukin-33) resulted in the accumulation of tissue wastes in mouse ovaries, which in turn accelerated ovarian aging and functional decline[2]. This led Prof. Lou to further explore the role of IL-33 in the brain.

IL-33 was first discovered in 2003 and has been classified into the IL-1 cytokine family. IL-33 is best known for its role in innate immunity as well as in defense against viral infection. Growing evidence suggests its role beyond immune responses. For example, the expression of IL-33 has been detected in a wide range of tissues. Some studies have shown that there may be a link between the IL-33 gene and the risk of AD and that IL-33 administration ameliorates AD-like pathology in mice[3].

The study also illustrated why IL-33 loss led to neurodegeneration in the IL-33-deficient mice. The researchers found an abrupt aging surge in brain neurons at middle age (40 weeks) in mice. In response to this aging surge, the wild-type mice upregulated neuronal repair mechanisms by increasing IL-33. However, the IL-33-deficient mice failed to do so due to a lack of IL-33, leading to the accumulation of abnormal tau and DNA damage in brain neurons that eventually caused Alzheimer-like symptoms at old age (60 weeks).

The study supports a role of IL-33 in the repair of neurons and sheds light on how IL-33 deficiency could contribute to the late-onset AD. It may be possible to identify early biomarkers for AD before massive neuron loss.


Who is likely to develop AD?

Unfortunately, despite extensive study, the cause of AD has not been fully understood. The use of advanced brain imaging techniques helps illustrate how an AD brain is different from a normal human brain. There are abnormal amyloid and tau proteins in the brains of patients with AD, and these protein aggregates are believed to damage brain function and considered as marks of the disease. However, not all people with these AD brain markers develop disease symptoms such as cognitive decline. The underlying mechanism seems to be more complicated than thought.

So far, a number of risk factors for AD have been established, and research into why these risk factors contribute to the development of AD have been deepening our understanding of the disease and would lead to improvements in its management. Currently, there is no available treatment to stop or reverse the course of AD or other neurodegenerative disorders.

Examples of AD risk factors include:

AD largely strikes older adults. Of all the people who have AD, only 5% develop symptoms before age 65, and these cases are defined as the early-onset AD. In the early-onset AD, symptoms usually develop in people's 40s and 50s, and even in their 30s. By contrast, the late-onset AD, which accounts for 95% of all AD cases, begins after age 65. The likelihood of developing Alzheimer's doubles about every five years after age 65. After age 85, the risk reaches nearly 50%.

The most well-known genetic susceptibility gene is Apolipoprotein E (APOE). People carrying the APOE ε4 allele are several times more likely to develop AD compared with those who do not have it. Additionally, Genome-Wide Association Studies (GWAS) have identified a number of other genes associated with AD, including APP, PSEN1, PSEN2, BIN1, PICALM, CLU, CR1, MS4A6A, ABCA7, SORL1, PTK2B, EPHA1, HLA-DRB5-HLA-DRB1[4].

AD can run in families, and this is called familial AD, which represents only a very small proportion of AD patients. In most cases of AD, there appears to be no genetic factor or family link involved, and these cases are known as sporadic AD.

These lifestyle choices have been reported to correlate with a higher risk of AD:

*Smoking
*Lack of physical exercise
*Heavy consumption of alcohol
*Loss of sleep
*Lack of social engagement
*Diet high in sugar, and deficiency in folate, vitamin B12, antioxidants (vitamins A, E, and C), and other essential nutrients

People with these vascular characteristics or disorders appear to be more prone to AD:


What's my chance of developing AD?

AD is the most common form of dementia, accounting for accounting for 50% to 70% of all dementia cases. Globally, there are 47 million people living with dementia in 2015. This number will triple by 2050, which is more than 140 million[5]. Much of the increase will be in developing countries, largely due to the fast growth in the elderly population in developing countries such as China, India, etc.

Fig. 1 Number of people with dementia 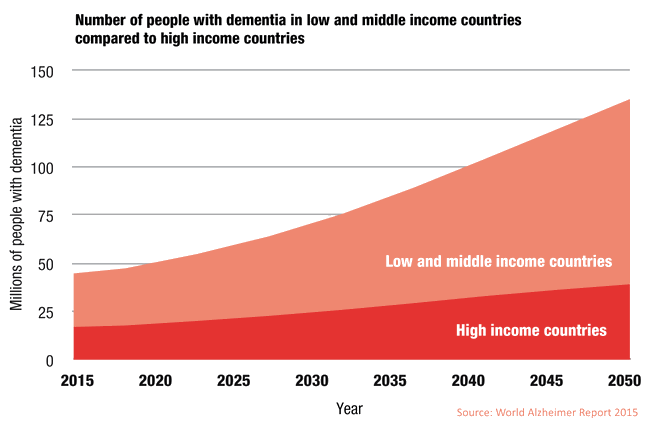 
What are the early signs of AD?

AD primarily affects elderly adults. If there are members of your family who have reached the age of 60 or 65,  it's important to check whether they have signs of AD. Early detection is associated with better outcomes. Here is a list of early signs of AD:

AD can affect almost every aspect of the daily life. When warning signs appear, it's critical to get a physical check quickly. Some of the warning signs of AD can also be caused by other disorders or conditions. A physical check helps rule out these disorders and determine whether you have AD or not. If the disease can be detected earlier, it will allow doctors to make better treatment plans.


How to prevent AD?

Although there are many mysteries regarding how vascular and psychosocial factors contribute to the development and clinical manifestation of AD, there are many possible strategies for AD prevention. There are three levels of prevention:

Many risk factors of AD, such as most vascular factors and disorders, psychosocial factors, and lifestyles are modifiable. To prevent AD, it's required to manage these risk factors. For instance, you can

Secondary prevention is aimed at early detection of AD. A relatively long preclinical stage of dementia has been demonstrated. During this preclinical stage, typical symptoms such as cognitive impairment do not appear or do not reach the criteria, but there are changes at the molecular, cognitive, psychiatric, behavioral and subcortical levels. Scientists want to find early markers or predictors of progression of AD and use these predictors to identify which individuals are likely to develop the disease.

But early detection of AD is still a challenge because of the lack of reliable predictors. Furthermore, at present no efficacious drugs are available for slowing down the progression of AD.

Currently, the drugs widely used for AD and other forms of dementia include cholinesterase inhibitors (donepezil, rivastigmine, and galantamine) and the N-methyl-D-aspartate-receptor antagonist (memantine). These drugs are designed to target clinical symptoms of the disease such as cognitive and neuropsychiatrie disturbances.

Some alternative treatments, such as Huperzine A, Caprylic acid and coconut oil, Omega-3 fatty acids, Coenzyme Q10, Phosphatidylserine, Coral calcium, Tramiprosate, and Ginkgo biloba, but the safety and efficacy of these treatments have not been confirmed.

However, the beneficial effects of some of those preventive strategies need more strong evidence. There is a long way to go before finding an efficient way to slow down or even reverse the brain damage in AD.