The University of Michigan (UM, U-M, U of M, or UMich), often simply referred to as Michigan, is a public research university in Ann Arbor, Michigan.

Since its establishment in Ann Arbor, the university campus has expanded to include more than 584 major buildings with a combined area of more than 34 million gross square feet spread out over a Central Campus and North Campus, two regional campuses in Flint and Dearborn, and a Center in Detroit. The University was a founding member of the Association of American Universities.

Something about University in details: https://umich.edu/ 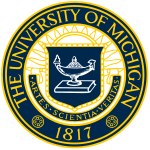