Dr. Arul Chinnaiyan, professor of urology and director of the Michigan Center for Translational Pathology, and his team have recently discovered that a non-coding RNA called ARLNC1 could play a role in the progression of prostate cancer. This discovery suggests ARLNC1 as a new potential drug target [1].

The Chinnaiyan lab is committed to dissecting cancer biology, using multiple methods such as genomic, proteomic, metabolomic and bioinformatics. Their research interests include prostate cancer.

Long noncoding RNAs (lncRNAs) are emerging as important regulators of tissue physiology and disease processes including cancer. But little is known about the underlying mechanisms. For this, lncRNAs are also referred to as the dark matter of the genome.

Dr. Chinnaiyan's team continued their research to find that ARLNC1 (androgen receptor (AR)-regulated long noncoding RNA 1) is increased in prostate cancer compared with that in normal tissue. Additionally, this lncRNA is associated with AR signaling in prostate cancer progression. On one hand, the AR induces the expression of ARLNC1. On the other hand, ARLNC1 stabilizes the AR transcript via RNA-RNA interaction. Both in vitro and in vivo experiments revealed that blocking ARLNC1 could inhibit AR expression, global AR signaling, and prostate cancer growth. By contrast, increasing ARLNC1 could result in the formation of large tumors.

These data, collectively, suggest that the lncRNA ARLNC1 may play a role in prostate cancer progression and represent a new therapeutic target.

The AR is a nuclear receptor that functions as a transcription factor and regulates the normal development and growth of the prostate. It is activated by binding either of the androgenic hormones, testosterone, or dihydrotestosterone. However, the AR is also involved in the development of prostate cancer. Many studies have shown that the AR helps prostate cancer cells to survive. Thus, the AR has been suggested as a drug target. But inhibiting the AR has only proven to be effective in animal studies.

According to Dr. Chinnaiyan, it's important to better elucidate the AR. Their latest study reveals a mechanism involving ARLNC1 that potentiates AR signaling during prostate cancer progression and provides a novel approach to inhibit the AR.

Finally, Dr. Chinnaiyan pointed out that they'll further explore the dark matter of the genome. Except for ARLNC1, there are many other lncRNAs that remain poorly understood. A deeper understanding of these molecules would provide new insights into cancer, other diseases, as well as normal physiological processes.

Epidemiology studies have suggested that prostate cancer occurs most frequently in African Americans while having lower rates in Asian males[3]. 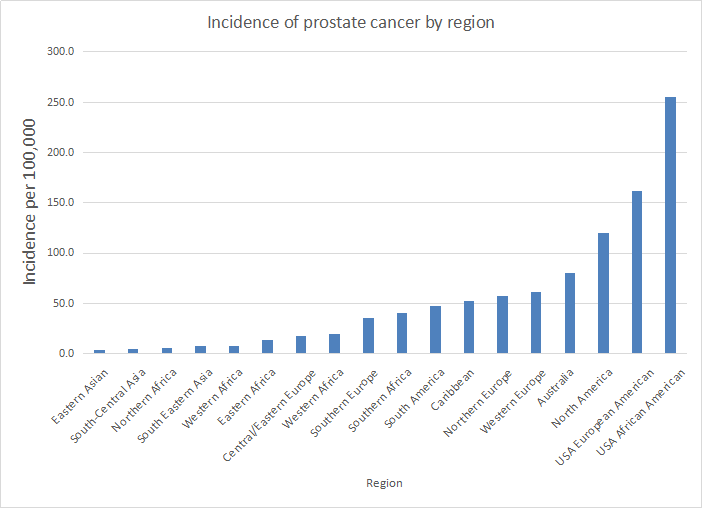 Men who have a first-degree relative with prostate cancer have twice the risk of developing the disease compared to those in the general population. Genetic linkage studies in multiple-case families have identified the homeobox gene HOXB13 as a definite prostate cancer predisposition gene[4].

Accumulating evidence suggests that many dietary components may play a role in the pathogenesis of prostate cancer. For instance, excessive intake of animal fats appears to contribute to the onset of prostate cancer, and plant foods that provide a multitude of antioxidants and phytochemicals have a demonstrable beneficial effect on prostate cancer. However, the results of previous studies in this field have yielded inconsistent results, with individual antioxidants having been shown to have positive, negative, or no association with prostate cancer risk[6][7].

Several studies have suggested a link between exposure to certain chemicals and risk of prostate cancer. These chemicals include The bisphenol A (BPA), which is a synthetic estrogen, chlordecone, and Pesticides.

Measurement of prostate specific antigen (PSA) is useful in screening of prostate cancer.

PSA is a protein produced by normal, as well as malignant, cells of the prostate gland. The PSA test measures the level of PSA in a man's blood. When a man has prostate cancer, his PSA level often increases. This is why the PSA test is usually the first step in any prostate cancer diagnosis.

However, the PSA screening by itself cannot tell you if cancer is present. It is often done along other examinations such as a digital rectal exam (DRE). In addition, PSA levels can be affected by many factors, such as age, race, certain medical procedures, certain medications, an enlarged prostate, and a prostate infection.

Many countries recommend offering the PSA test and DRE yearly to men 50 years or older who have a life expectancy of at least 10 years. But in some countries, the coverage of PSA test is relatively low, which is not good for early detection of prostate cancer.

In its early stages, prostate cancer usually causes no symptoms. When it progresses to more advanced stages, it may cause signs and symptoms such as frequent urination, nocturia, difficulty starting and maintaining a steady stream of urine, blood in the urine, and painful urination. These symptoms can also occur in other diseases and conditions. If you have one or more of these symptoms, you’d better go to your doctor.