A small but important guy--miRNA

In 1989, Victor Ambros discovered that the gene lin-4 controls the development of C. elegans larvae by inhibiting the lin-14 gene. However, he thought the gene lin-4 expressed a regulatory protein that inhibited the expression of the gene lin-14. Until 1993, Victor's students Rosalind Lee and Phonda Feinbaum successfully cloned lin-4. They found that the product of lin-4 is not a protein-encoding mRNA, but a 22-nucleotide non-coding RNA containing several partially complementary sequences to the 3'UTR of lin-14 mRNA. They believed that this complementarity is responsible for inhibiting the translation of lin-14 mRNA into LIN-14 protein. Lin-4 RNA is the first small RNA found.

In 2000, a second small RNA, let-7 RNA was discovered, which inhibits lin-41 to promote the late developmental transformation of C. elegans.

A year later, lin-4 and let-7 RNA were found to be part of a large class of small RNAs present in C. elegans, Drosophila, and human cells. Many of the RNAs in this class are similar to lin-4 and let-7 RNA, except that their expression patterns are often inconsistent with the role of regulating developmental time. This suggests that most may play a role in other types of regulatory pathways. At this point, researchers began using the term "micro ribonucleic acid" to refer to such small regulatory RNAs.


Micro-ribonucleic acid, referred to as microRNA or miRNA, as its name implies, it is tiny, about 22 Nucleotides. It is an evolutionarily conserved, single-stranded, non-coding RNA molecule that widely presents in various organisms from viruses to humans.

2.1 Canonical pathway
Approximately 60% of miRNA genes are located in the intergenic region, and the remaining 40% are in introns of protein-coding genes or other transcriptional elements. Intergenic miRNAs are often clustered and have similar expression profiles, probably because they are expressed under the control of a common promoter. Intron miRNA genes are generally consistent with the intron transcriptional orientation, suggesting that most of these genes are co-transcribed with host protein genes and then cleaved from the introns of these protein genes.

First, in the nucleus, the miRNA gene is transcribed into a long transcript under the action of RNA polymerase II (RNA Pol II). This transcript is called a primary miRNA (pri-miRNA). The pri-miRNA is a stem-loop structure of about 70 nucleotides having a 5' end cap structure and a poly Adenyl tail. Pri-miRNAs can be as long as several thousand bases. Mature miRNA sequences are usually only located on one of the strands that make up the hairpin structure. A single pri-miRNA can contain from one to six miRNA precursors.

And then, the nuclear protein DGCR8 (DiGeorge critical region-8) recognizes and binds to the double-stranded structural region of the pri-miRNA. DGCR8 recruits RNase III Drosha to form a micro-processing complex that cleaves 11 nucleotides from the pri-miRNA hairpin end to form a product called precursor miRNA (pre-miRNA) with two bases at the 3' end and a phosphate group at the 5' end.

Subsequently, the transporter Exportin-5 recognizes the 3'-end dinucleotide overhang of the pre-miRNA hairpin (retained by the RNase III enzyme Drosha) and outputs the pre-miRNA from the nucleus to the cytoplasm in the synergy of Ran-GTP. The pre-miRNA is further cleaved in the cytoplasm by another RNase III Dicer to form a short double-stranded miRNA. The miRNA duplex is loaded onto the Argonaute (Ago) protein to form a RISC (RNA-induced silencing complex) complex precursor, causing the duplex to unravel and discard the passenger RNA strand, ultimately forming a mature RISC carrying the mature single-stranded miRNA; passenger RNA strand is degraded. 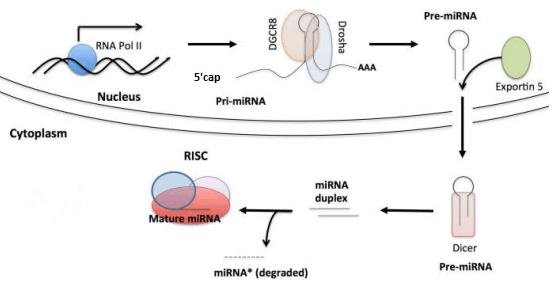 Figure 1: Canonical pathway of miRNA biosynthesis
(sourcing: https://www.ncbi.nlm.nih.gov/pmc/articles/PMC4429768/)
(miRNAs are initially transcribed into long, capped and polyadenylated pri-miRNAs. The Drosha complex converts the pri-miRNA into a hairpin-shaped pre-miRNA. Next, Exportin-5 promotes nuclear translocation of the pre-miRNA, which is further processed by the Dicer complex in the cytoplasm. After cleavage, the resulting miRNA:miRNA* duplex is dissociated, mature miRNA is integrated into RISC, and miRNA* is degraded.)

2.2 Non-canonical pathway
Mirtrons were first discovered by detecting deep sequencing data from small RNAs of Drosophila melanogaster and C. elegans, revealing short introns with pre-miRNA size. In this pathway, a pri-miRNA forms a pre-miRNA by utilizing Dicer instead of the Drosha / Dgcr8 complex. It is then combined with the classical miRNA pathway in the transport phase of Exportin-5 binding.


A.The system name of a miRNA generally consists of three parts: species, category, serial number, and they are connected by short lines.

B. Human, mouse, and rat are the three most popular organisms for researchers, and they are named with the prefixes hsa, mmu, and rno, respectively.

C.Categories can distinguish the form of miRNA. mir refers to a pre-miRNA or pri-miRNA, miR represents a mature miRNA.

D. The serial number represents the order of miRNA discovery. In general, the earlier the discovery, the smaller the number.

F.The miRNAs found before the naming convention, such as lin-4, let-7, still retain the original name.

When the first miRNA was discovered, scientists realized that this small molecule has the effect of inhibiting and regulating genes. What mechanism does miRNA repress other genes, leading to inhibition of protein synthesis, and further regulation of cell differentiation and tissue development? After more than two decades of in-depth research, scientists have found the possible mechanism by which miRNAs regulate genes.

The mature miRNA in the RISC complex binds to the 3'UTR of the target mRNA (messenger RNA) through a 2 to 8 nucleotide sequence at the 5' end, thereby suppressing translation or degradation of mRNA. This process is also called post-transcriptional gene silencing (PTGS). The 2 to 8 nucleotide sequence at the 5' end of the miRNA is called "seed" region; the sequence in the 3'-UTR of the target mRNA acts on the miRNA is called a miRNA reaction element (MRE). But some studies have shown that it also occurs in 5'-UTR, even in protein coding sequences. For mammals, base pairing is always imperfect, such as pairing between let-7 and lin-41.

When the seed region of the miRNA is completely or nearly completely complementary to the MRE of the target mRNA, the mRNA is degraded; while their binding is incomplete, protein synthesis is inhibited. Both of these combinations can result in a decrease in the overall level of the protein, thus leading to gene regulation.

One miRNA can bind hundreds of target mRNAs in sequence, and a single mRNA can be targeted by several miRNAs. 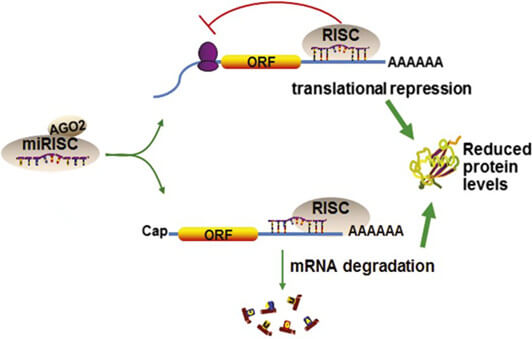 4.2 Medical roles
miRNA can also serve as a diagnostic or therapeutic target for one or more diseases. When miRNAs target tumor suppressor mRNA, their roles are oncomiRs; on the one hand, they act as tumor suppressors by targeting mRNAs encoding oncoproteins.

Deregulation of miRNAs in disease states can be exploited as potential therapeutic agents by miRNA replacement therapy using miRNA mimics or by inhibition of miRNA function by anti-miRNA.

Many preclinical studies using various disease models have tested the use of these next-generation therapies, and some miRNA-based therapies have entered clinical testing.


miRNA dysregulation has proved to be related to many diseases, especially cancers. A notable feature of cancer is the disorder of gene expression. This suggests that miRNAs affect tumor growth, invasion, metastatic ability, and angiogenesis, etc. miRNAs can act as oncogenes or tumor suppressors.


In conclusions, miRNA is a non-coding RNA with 21 to 23 nucleotides in length. Although it is small, it plays an essential regulatory role in life activities.

The number of miRNA genes being discovered is increasing, and new mechanisms of action may reveal possible new therapeutic strategies. The discovery and development of miRNA inhibitors or miRNA mimics as new drugs will provide new hopes for combating cancer. All in all, the deepening of small molecule miRNA research will help us uncover more of the mysteries of life.
About news
News