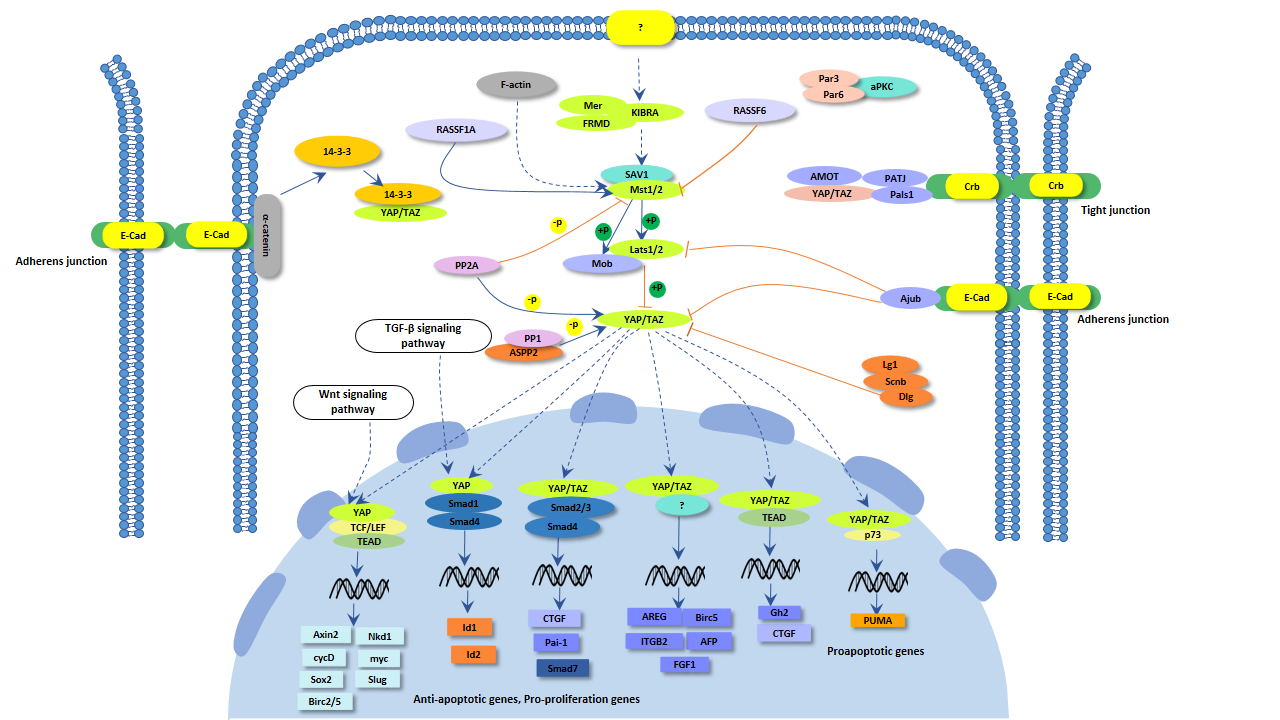 What is Hippo Signaling Pathway?

The Hippo signaling pathway, also known as the Salvador/Warts/Hippo (SWH) pathway, is regulated by various stimuli, such as G-protein coupled receptor signaling, cellular energy status, mechanical stress, etc. Its name is derived from one of its key signaling components-the protein kinase Hippo (Hpo) in fruit fly. Tissue overgrowth is the major cause for mutations in this gene.

The Function of Hippo Signaling Pathway

The pathway plays an evolutionarily conserved fundamental role in controlling organ sizes in multicellular organisms through the regulation of cell proliferation and apoptosis.

Dysregulation of this pathway contributes to massive overgrowth of tissue. The Hippo signaling pathway is highly conserved and limits organ size by phosphorylating and inhibiting the transcription co-activators YAP and TAZ in mammals (ortholog of Drosophila Yki), key regulators of proliferation and apoptosis.

The Processes of Hippo Signaling Pathway

As shown in the figure, when activated, the Hippo kinase cascade phosphorylates and inhibits the transcription co-activator YAP (Yes-associated protein), and its paralog TAZ (transcriptional coactivator with PDZ-binding motif), resulting in their cytoplasmic retention and degradation.

On the contrary, dephosphorylated YAP/TAZ translocates into the nucleus and activate gene transcription through binding to TEAD family and other transcription factors. Such changes in gene expression promote cell proliferation and stem cell/progenitor cell self-renewal but inhibit apoptosis, thereby coordinately promote increase in organ size, tissue regeneration, and tumorigenesis.

YAP and TAZ: a Nexus for Hippo Signaling and Others

As mentioned before, YAP/ TAZ is the prime mediators of the Hippo signaling pathway, and the Hippo kinase cascade is the primary regulator of YAP/TAZ by phosphorylating YAP/TAZ and inhibiting their nuclear activities.