What Is an Antibody?

Antibodies are a special type of proteins essential to our health. For example, antibodies help our bodies get rid of pathogens such as viruses, bacteria, and parasites so that we can stay healthy. When 'antibody' is mentioned, another term 'antigen' is often mentioned correspondingly. But, exactly what is an antibody? What is an antigen? And, what distinguishes antibodies from other types of proteins? This article will answer these questions, following the principle of proceeding from shallow to deep. You will get a comprehensive understanding of various aspects of antibodies, including their chemical nature, interaction with antigens, biological functions, classification, production, and applications.

Firstly, let us look at the chemical nature of an antibody.

From the chemical perspective, an antibody (Ab) is a protein composed of four polypeptide chains, including two light chains and two heavy chains. The four chains jointly form a 'Y' shaped structure, as shown in Fig. 1. 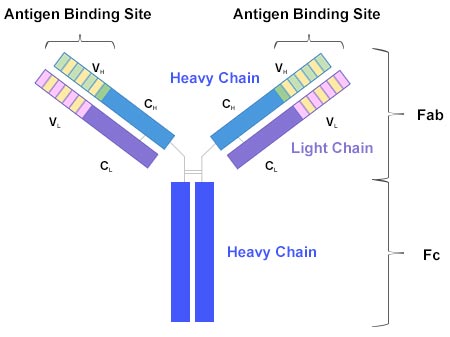 The two heavy chains are linked to each other by disulfide bonds and each heavy chain is linked to a light chain by a disulfide bond. Each heavy and light chain is composed of one variable region (V) and one constant region (C). The variable region is unique in each antibody type, and binds to a specific antigen. By contrast, the constant region is essentially the same in all antibody molecules of the same class (IgG, IgM, IgA, IgD, or IgE).

An antigen (Ag) is a molecule that has the ability to induce an immune response (to produce an antibody) in the host organism.

Antigens are typically proteins, peptides, or polysaccharides. Lipids and nucleic acids can combine with those molecules to form more complex antigens. Parts of bacteria, viruses, and other microorganisms can be an antigen. When a foreign antigen enters the body, it stimulates the immune system to produce antibodies. The protective antibody molecules help the body fight against the antigen.

Antibodies recognize antigens (usually proteins) based on their structure as well as content, and bind to only a small part of an antigen, known as the epitope, or antigenic determinant. Each type of antibody binds to one unique epitope, because of the unique antigen-binding site of an antibody. In a word, an antibody binds to a particular antigen specifically. Fig. 2 shows the structures of epitope and antibody, which will help you better understand the specificity of antigen-antibody interaction. 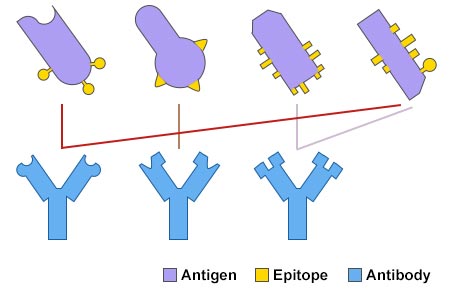 In nature, most antigens have the potential to be bound by multiple antibodies, and if a host organism is exposed to an antigen, the host will develop an array of antibodies that each bind to a separate epitope of the antigen, so these antibodies will vary in specificity and fight against the antigen more efficiently.

The highly specific binding of an antibody to an antigen is a mainstay for many useful experimental techniques, such as WB, IHC, FC, ELISA, IP, etc. These techniques are extensively used in scientific research, disease diagnosis, and other industries.

From the biological perspective, an antibody is a protective protein produced by the immune system in response to the presence of an antigen. More specifically, antibodies are produced by plasma cells that are developed from B cells, or B lymphocytes, which are a type of white blood cells. When a B cell becomes activated due to a particular antigen, it differentiates into the antibody-secreting cell, plasma cell. Plasma cells release antibodies that specifically bind to the corresponding antigen.

Antibodies have a wide range of functions in the body, either dependent or independent of effector cells or effector molecules. Here are some examples:

In immunology, neutralization refers to a process by which antibodies block the infectivity or pathogenesis of pathogens, such as viruses, bacteria, parasites, and fungi. Antibodies can specifically bind to the corresponding antigen on pathogens, rendering them non-infectious. These antibodies are called neutralizing antibodies (NAb).

Agglutination is a reaction in which antibodies bind their corresponding antigens on the surface of large, easily sedimented particles such as cells and cause these particles to form clumps. As mentioned above, antibodies have two antigen binding sites. This nature allows antibodies to cross-link particular antigens. Thus, antigens coated with antibodies cluster together, becoming immobile and susceptible to destruction.

In opsonization, a particle such as a bacterium will be marked with opsonins such as antibody and targeted for destruction by an immune cell known as a phagocyte through a process called phagocytosis. After antibodies bind to the particular antigen on a pathogen, phagocytes are attracted to the pathogen. During this process, the Fab region of the antibody binds to the antigen, while the Fc region of the antibody binds to an Fc receptor on the phagocyte, contributing to phagocytosis.

Overall, antibodies exert their functions in multiple ways. Simply speaking, the biological function of antibodies is to bind to pathogens and their products and facilitate their removal from the body.

An antibody is also known as an immunoglobulin (Ig). In humans, there are five primary classes of antibodies, with each class playing a distinct role in the immune response. These classes are identified as IgM, IgG, IgA, IgE, and IgD, which differ in the constant region of their heavy chains, as shown in Fig. 3.

IgG: IgM is the most plentiful in circulation, accounting for 75% of all Igs in the serum. IgM can cross blood vessels and even the placenta to provide protection to a fetus. IgG is also said to be the most versatile, carrying out of the functions of all other Ig classes.

IgA: IgA found in the serum is a monomer but IgA found in secretions is a dimer containing a J chain. Fig. 3 only shows secretory IgA. IgA is the major class of Ig in secretions such as tears, saliva, colostrum, and mucus, and is an important part of mucosal immunity.

IgE: IgE is the least common serum Ig since it binds very tightly to Fc receptors on immune cells including basophils and mast cells. IgE is found mostly in saliva and mucus. The primary function of IgE is to recognize antigen during an allergic reaction.

IgD: IgD is primarily found on B cell surfaces where it functions as a receptor for antigen and signals the B cells to be activated. So far, relatively little is known as the function of IgD.

To conclude, the five human Ig classes are distinguished from each other by the type of heavy chain and their functions are not exactly the same.

The special properties of antibodies making them a useful tool for scientific research, disease diagnosis and treatment, and other areas. There is a growing demand for antibodies due to their wide applications. Man-made antibodies are primarily divided into two types: monoclonal antibody (mAb) and polyclonal antibody (pAb). With the development of technology, a new type of man-made antibody emerges; that is the recombinant antibody (rAb).

The production of monoclonal antibody is mainly using the hybridoma technology, which involves injecting an immunogen (an antigen or any substance capable of eliciting an immune response) into a host animal to trigger an immune response, isolating activated B cells from the spleen, fusing the isolated B cells with myeloma cells to produce hybridomas, screening hybridoma supernatants to select the successful hybridoma that would produce desired antibodies, cloning or expanding the selected hybridoma to produce larger amounts of antibodies, and purifying and testing the antibodies. Antibodies made through this procedure are called monoclonal antibodies and recognize only one epitope on an antigen.

An antibody can bind to a unique antigen with high specificity. The specificity is a mainstay for a variety of experimental methods. The progress in antibody production allows high yield production of antibodies. Currently, antibodies are mainly used in:

Monoclonal antibodies have emerged as an important treatment for a wide range of diseases, such as cancer, chronic inflammatory diseases, autoimmune diseases, and infection. Therapeutic antibodies work in multiple ways. For example, some therapeutic antibodies stimulate the patient's immune system to attack diseased cells by binding to specific molecules, whereas some block critical molecules cancer cells use to evade immune attacks to survive.

In summary, antibodies are an important, protective group of proteins in organisms, with the ability to bind to corresponding antigens with high specificity. These protective proteins are produced by a group of immune cells known as plasma cells. In the human body, there are five major classes of antibodies, each with different heavy chains and functions. Since the interactions between antibodies and antigens are highly specific, antibodies are used for many purposes including research, disease diagnosis and antibody therapy.