Epigenetics is the study of heritable phenotype changes in gene expression that modify DNA, RNA, and protein but do not involve alterations of the nucleotide sequence. Posttranslational modifications (PTMs) are the most important method to research epigenetics that apply to proteins. PTMs are marks that provide an extensive regulatory mechanism for cells to signal which genes to turn off and on. Many types and families of proteins are subject to PTMs, but one of the most highly decorated is the histone family of proteins.

Histone packages genomic DNA into nucleosomes, which allows about 2 meters of DNA to be placed in the nucleus of a cell. The nucleosome contains two subunits, each consisting of histone H2A, H2B, H3, and H4. In addition, there is histone H1, commonly referred to as a junctional histone. The most prevalent PTMs found on histones have a crucial role in gene expression, including methylation, acetylation, phosphorylation, and ubiquitination. These markers serve as signals for opening and compressing chromatin, as well as recruitment factors that promote and antagonize transcription. The modifications of histone on below image can regulate gene expression, which in turn affects chromosome function. 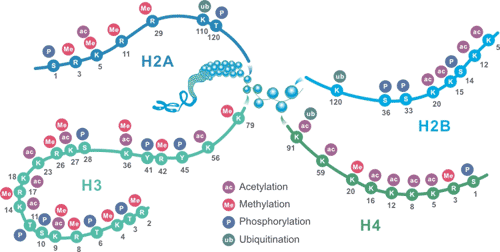 Here is the catalog of some Modified Histone Antibodies.

What is histone modification?

Histone modification are covalent and enzymatic post-translational modifications (PTMs) of histones by various modifying enzymes. The PTMs made to histones can regulate gene transcription through the alteration of chromatin structure by introducing different histone modifiers to histone amino acid residues.

What is the purpose of histone modification?

How many histone modifications are there? And what are they?

There are at least 15 different known modifications associated with the histones. Among these histone modifications, acetylation, methylation, phosphorylation, and ubiquitylation are the most well-studied, while sumoylation, isomerization, ADP-ribosylation, and biotinylation, etc. have yet not been thoroughly investigated.