Based on different phages, vectors or libraries, the phage display systems could be divided into various types, details as below. 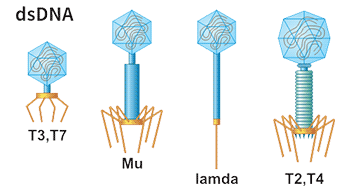 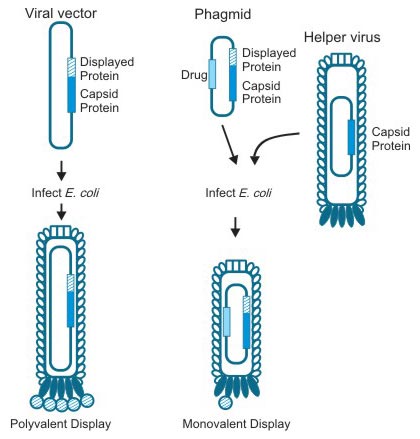 What phage display services could CUSABIO offer to you?

CUSABIO could provide phage display technologies to customers that cover the broad scope of the technologies including key areas of library construction and screening as well as antibody modification and expression.

The phage display library technology refers to the clone and expression for variable region genes of all antibodies from a certain animal in a plasmid or phage, then screen clones carrying specific antibody genes via different antigens, thereby, to obtain corresponding specific antibodies or peptides. CUSABIO can construct antibody libraries as well as screen desired monoclonal antibodies with high specificity and affinity from a wide range of species, such as human, alpaca, mouse, rabbit, chicken, dog, bovine, and so on. Compared with the traditional hybridoma method, antibody phage display library has distinct advantages on selecting novel monoclonal antibodies and even the fully humanized antibody. Furthermore, the antibodies from phage library have following advantages.

As we known, peptides are biological molecules, consisting of short sequences of amino acids, so peptides are easy to be synthesized, show low toxicity and high efficiency. Most importantly, if targeting receptors or molecules that are specially expressed on cancer cells would significantly enhance cancer therapeutic effect and reduce cancer-related mortality as well. Thus phage display technology on screening target peptides for developing cancer drugs absolutely can offer new opportunities for the treatment of many tumor diseases. We are confident the peptide library screening service from CUSABIO can provide more possibilities for your research.

Humanized antibodies are antibodies from non-human species whose protein sequences have been modified to increase their similarity to antibody variants produced naturally in human beings.

As for affinity maturation, which is the process to increase their affinity for a particular antigen via their B cells during the course of an immune response. With repeated processes of somatic hypermutation for B-cell receptors and subsequent clonal selection to the same antigen, a host will produce antibodies of successively greater affinities.

Antibody humanization has played a fundamental role in the remarkable progress of antibodies as therapeutic reagents. As we known, since the advent of hybridoma technology, most monoclonal antibodies derive from rodent, such as mouse, rat, rabbit, hamster, etc. But most rodent antibodies have been shown a limited use as therapeutic agents because of a short serum half-life as well as they can not trigger human effector functions. Furthermore, most rodent monoclonal antibodies could be recognized as foreign proteins by the patients’ immune systems, then resulting in a human anti-mouse antibody (HAMA) response. On the other hand, in some cases, the affinity of a certain antibody deriving from phage library may not be high enough for used as therapeutic agents, then affinity maturation is urgently required to preserve the epitope specificity and functional activity of the antibody as well as boost potency to the desired level. Thus antibody humanization & affinity muturation absolutely double strong alliance for the antibody therapeutic applications.

You can also contact us via [email protected] directly or online message.