The successful cultivation of the first small intestinal organoid from Lgr5+ intestinal stem cells by Hans Clevers in 2009 ushered in the era of organoid research. After that, organoids have become popular in the scientific research circle and become a hotspot in vitro model system in just over a decade. Herein, we will describe the development history, construction & preparation, categories, and applications of organoids.

As the name implies, an organoid resembles a real represent organ. Scientifically speaking, organoids are in vitro generated three-dimensional (3D), mini-cluster of cells that highly simulate the structure and function of the corresponding organ in vivo [1]. More colloquially, an organoid is a mini-organ that is generated in vitro with the ability to self-renew and self-organize and performs organ functions similar to those of the tissue of origin.

2. The Developmental History of Organoids

In the following decades, several similar dissociation-reaggregation patterns were observed in vertebrate models, such as Holtfreter's experiment in amphibian pronephros in 1944 [4] and Weiss's experiment in chick embryos in 1960 [5].

Differentiation of embryoid bodies in vitro was observed in 1961 by Pierce and Verney [6].

Steinberg formulated the Differential Adhesion Hypothesis (DAH) of cell sorting out in 1964.

Pluripotent stem cells (PSCs) were first isolated and established from mouse embryos in 1981 [7] [8].

It was not until 1998 that American biologist James Thomson isolated and cultured human embryonic stem cells from human blastocysts for the first time [11].

Human-induced pluripotent stem cells (iPSCs) were successfully produced by reprogramming mouse and human fibroblasts in 2006, which has had a major impact on stem cell and organoid research [12].

In 2008, Sasai et al. laid the foundations of brain organoids by demonstrating the self-organization of human brain iPSCs into neural cells that formed polarized cortical tissues [13].

In 2009, Hans Clevers and colleagues first demonstrated that single Lgr5+-expressing intestinal adult stem cells (ASCs) could self-organize and differentiate to form intestinal crypt-villus structures that contained all intestinal cell types [14]. This ushered in a new era in the development of organoid technology. Thereafter, organoids were constructed and employed as a novel research model that could be used instead of traditional cell lines and heterogeneous animal models.

Nakano et al. demonstrated that a self-organized optic cup structure was formed from human PSCs in 3D culture in 2012.

Human brain organoids are generated from iPSCs derived from cells from patients with microcephaly in 2013 [16]. Lee JH et al. revealed that lung organoids can be produced from the 3D coculturing of endothelial cells and adult bronchioalveolar stem cells [17].

The mammary gland, fallopian tube, and hippocampal organoids were created in 2015. Figure 1. Timeline for the development of organoid cultures

This picture is cited from: https://www.ncbi.nlm.nih.gov/pmc/articles/PMC7468890/

3. How Are Organoids Made?

The methods for culturing organoids from various tissues are similar. Stem cells are most frequently cultured in Matrigel and in the presence of suitable exogenous factors including chemical small molecule inhibitors/activators, cytokines, and medium additives, and can be coaxed into forming organoids of corresponding organs. The preparation of different organoids requires different combinations of additives. Even for tissues with very similar structures such as the small intestine and colon, the combinations of additives required for the preparation of organoids are different. In addition, generating organoids directly derived from patients' tumors is also a practical approach. 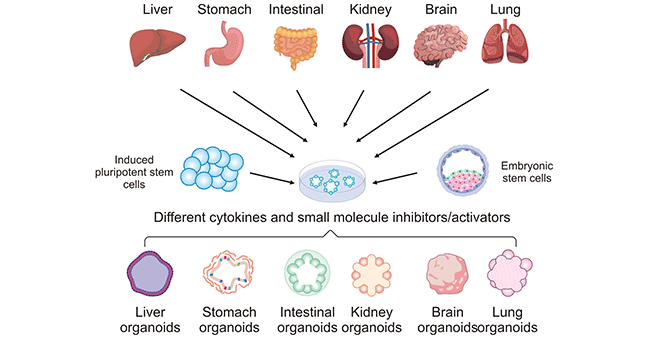 Since the successful establishment of epithelial organoids in 2009, organoid cultures have been used in various organs, including the brain, inner ear, lung, liver, colon, liver, pancreas, small intestine, prostate, stomach, and breast.

Although the wide application of organoid technology in the research community is still in its infancy, organoid technology has great potential as a tool for studying a wide range of subjects, including developmental biology, disease pathology, cell biology, regeneration mechanisms, precision medicine, and drug toxicity and efficacy tests.

[5] Weiss, Paul, and A. C. Taylor. Reconstitution of complete organs from single-cell suspensions of chick embryos in advanced stages of differentiation [J]. Proceedings of the National Academy of Sciences of the United States of America 46.9 (1960): 1177.