Nanobody, what a Powerful Novel Antibody!

As the COVID-19 outbreaks in the world, we urgently need safe and effective antiviral antibodies to as new drugs and treatment options for combating the new coronavirus (SARS-CoV-2). When it comes to therapeutic antibodies, monoclonal antibodies (mAb) will come to our mind. Indeed, monoclonal antibodies (mAbs) are the largest and fastest growing fields in the pharmaceutical industry. During the SARS and MERS outbreaks, some neutralizing monoclonal antibodies were developed and confirmed their potential in treating coronavirus infections. However, their clinical utilization is still hindered by the time-consuming and expensive antibody production process of eukaryotic systems. Here, we focus on a new type of antibody, which is an antibody developed against the shortcomings of mAb. It is a single-domain antibody made of camel immunoglobulin, also known as VHH or Nanobody. So what is Nanobody? And what are the advantages of Nanobody?

1. How was Nanobody Discovered?

3. What is the Production of Nanobody?

4. What are the Advantages of Nanobody?

5. What are the Applications of Nanobody?

6. The Latest Progression of Nanobody Research in SARS-CoV-2 Therapy

1. How was Nanobody Discovered?

Nanobodies (Nbs) are characteristic by small molecular weight, and their unique molecular structure. These features make them suitable for many fields such as disease diagnosis and treatment.

Nanobodies were discovered in the 1980s. Two college students complained to Hamers (a professor of immunology from the Free University of Brussels in Belgium) that the results of the experimental courses arranged by the school were known and not challenging. So Professor Hamers gave the remaining half a liter in the refrigerator to study the camel blood of sleeping sickness to Muyldermans etc. and told them to try to purify the camel antibody from it. Muyldermans and others were surprised to find that some of the antibodies purified from camel blood did not belong to the standard type of all vertebrates, but were a completely new, simpler variant antibody. This result puzzled everyone. Hamers immediately set up a research team to conduct special research on this antibody. From then on, the camel antibody has rapidly evolved from a student's experiment to the main project studied by Hamers and colleagues. In 1993, Hamers et al. reported for the first time on Nature that there is a heavy-chain antibody (HcAb) that naturally lacks light chains in camelids and sharks [1]. Compared with conventional monoclonal antibodies, except for the lack of a light chain, there is no CH1 region between the heavy chain variable region and the hinge region, only one heavy chain variable region (VHH) and two conventional CH2 and CH3 regions. The VHH is so-called Nanobody. For the structure of Nanobody, we will introduce in the next section.

Nanobodies (Nbs), also known as VHH antibodies, are antibodies with a single variable domain located on a heavy chain, derived from the Alpaca heavy chain IgG antibody (HCAb). Nbs are often seen as an alternative to conventional antibodies, and have significant differences in both production and use that influence their suitability. The main difference between Nbs and conventional antibodies has to do with their structure and their domains. As the figure 1 shows, conventional antibodies have two variable domains, called VH and VL, which offer each other stability and binding specificity. Nbs have VHH domains and lack VL domains, but are still highly stable. Lacking the VL domain also means Nbs have a hydrophilic side. 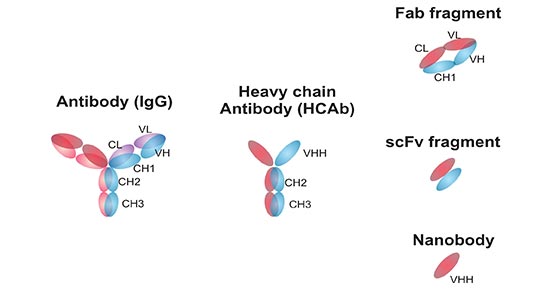 Fig 1. Structures and schematic representation of antibodies and antibody fragments

The VHH fragment of the heavy chain antibody is different from the VH characteristics of the conventional antibody, but the VHH structure cloned and expressed separately has the structural stability equivalent to the original heavy chain antibody and the binding activity with the antigen, which is currently known to bind the target antigen, the smallest unit [3]. The structural analysis results show that the VHH crystal is 2.5nm wide and 4.8nm long, and its molecular weight is only about 15KDa.

3. What is the Production of Nanobody?

Nanobodies (Nbs) are increasingly becoming popular as reagents for research with a larger number of papers utilizing Nbs appearing in the literature. On September 3, 2018, EMA approved the Sanofi Nanobody drug (Caplacizumab, also called Cablivi) for the treatment of adult acquired thrombotic thrombocytopenic purpura (aTTP). Cablivi became the first specific aTTP therapeutic drug and the first nanobody drug to be marketed.

With the first Nanobody drug approved, how to produce stable Nbs with large scale becomes an urgent problem to be solved. Currently, immune libraries are the most common option for the production of Nbs. As the figure 2 shows, the genetic information can be obtained through active immunization using an immunogen or using non-immunized Camelidae animals (such as camels, dromedaries, llamas, or alpacas) by collection of blood which contains the lymphocytes. Upon the specific sequence is amplified and inserted in a cloning vector, the screening process to isolate the most suitable Nbs is performed by phage display technology, or using other methods like cell surface display, mRNA/cDNA display, or MS spectrometric identification [4]. The most commonly used strategy to carry out this sort of screening is based on phage display selection. 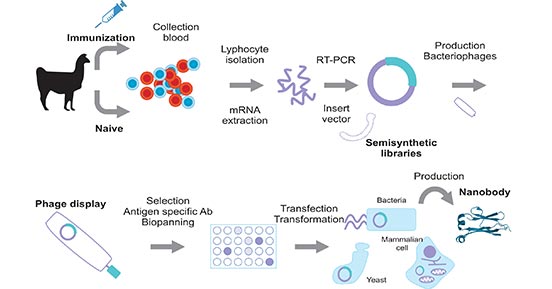 4. What are the Advantages of Nanobody?

However, Nbs still have some obstacles as in vitro diagnostic reagents. Due to the small molecular weight of Nbs, their structures need to be modified before they can be used in the development of clinical diagnostic kits. However, the commonly used structural modification techniques will negatively affect the biological activity of Nbs, thus seriously restricting the application of Nanobody products.

5. What are the Applications of Nanobody?

The Applications of Nanobody in Research

The Applications of Nanobody in Diagnosis

The Applications of Nanobody in Therapy

6. The Latest Progression of Nanobody Research in SARS-CoV-2 Therapy

In this section, we collect several latest progression of Nanobody research in SARS-CoV-2 therapy as follows: