Cervical Cancer, One of the Most Common Killers of Women

1. What is the Cervical Cancer?

2. What is the Cause of Cervical Cancer?

4. How does HPV Infection Cause Cervical Cancer?

5. How is Cervical Cancer Diagnosed?

6. What are the Treatments for Cervical Cancer?

7. How to Prevent Yourself from Cervical Cancer?

1. What is the Cervical Cancer?

Cervical cancer is a type of cancer that occurs in the cells of the cervix-the lower part of the uterus that connects to the vagina (Figure 1). It is the most common gynecological malignancy. This cancer can affect the deeper tissues of their cervix and may spread to other parts of their body, often the lungs, liver, bladder, vagina, and rectum. 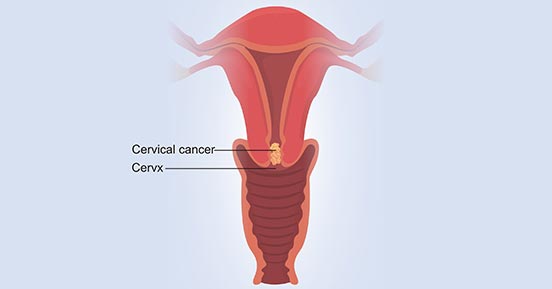 Figure 1. a diagram of cervical cancer

2. What is the Cause of Cervical Cancer?

Generally, cervical cancer begins when healthy cells in the cervix develop changes or mutations in their DNA. The mutations tell the cells to grow and multiply out of control, and they don't die. And the accumulating abnormal cells form a tumor. Cancer cells invade nearby tissues and can break off from a tumor to metastasize elsewhere in the body.

Currently, accumulating evidence has revealed that most cervical cancer are caused by the sexually transmitted human papillomavirus (HPV), which is a group of about 100 related virus. Some of them cause a type of growth called papillomas, which are more commonly known as warts. In addition to HPV infection, there are also several other things that can increase your risk of cervical cancer, including having HIV (the virus that causes AIDS), smoking, taking birth control pills for a long time (five or more years), having given birth to three or more children and having several sexual partners. So what is HPV? And how does HPV infection cause cervical cancer?

HPV encompass more than 120 different types that may infect human skin and mucosa. HPV is a relatively small, non-enveloped virus, 55 nm in diameter. The HPV gene consists of a single molecule of double-stranded, circular DNA containing approximately 7,900 bp associated with histones. All open reading frame (ORF) protein-coding sequences are restricted to one strand. The gene is functionally divided into three regions. The first is a noncoding upstream regulatory region of 400 to 1,000 bp, which has been referred to as the noncoding region, the long control region (LCR), or the upper regulatory region. The second is an early region, consisting of ORFs E1, E2, E4, E5, E6, and E7, which are involved in viral replication and oncogenesis. The third is a late region, which encodes the L1 and L2 structural proteins for the viral capsid (Figure 2) [3] [4]. 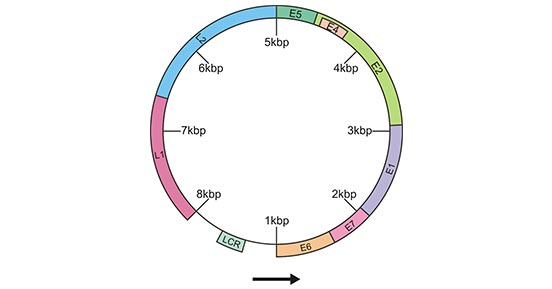 *This figure is derived from the publication on Clin. Microbiol. [4]

Among of these HPVs, Only 13–15 are found in cervical cancers and other malignancies and are called ‘high risk’ HPV (HPV-HR) [5]. HPV 16 is the most important HPV-HR-type, and HPV 18 is the second. HPV 16 and 18 are associated with two thirds of all cervical cancers. HPV-HR differs from other HPV types by oncogenic properties of two proteins E6 and E7 that may interfere with cell regulation and differentiation. In fact, uterine cervix infected with HPV is very common, especially in women in their early 20s. Most infections will clear spontaneously and only a minority will finally persist for many years and decades.

4. How does HPV Infection Cause Cervical Cancer?

As mentioned before, being infected with a cancer-causing strain of HPV doesn't mean you'll get cervical cancer. As the figure 3 shows, your immune system eliminates the vast majority of HPV infections and prevents the virus from doing serious harm within two years. But sometimes, the virus survives for years (generally 10-30 years). The virus can lead to the conversion of normal cells on the surface of the cervix into cancerous cells. *This figure is derived from The Nobel Committee for Physiology or Medicine 2008 illustration: Annika Rohl

Regarding of pathogenesis of oncogenic HPV, as HPVs encode only 8 to 10 proteins, they must employ host cell factors to regulate viral transcription and replication. The replication of HPV begins with host cell factors which interact with the LCR region of the HPV gene and begin transcription of the viral E6 and E7 genes. The proteins encoded by E6 and E7 gene deregulate the host cell growth cycle via binding and inactivating tumor suppressor proteins, cell cyclins, and cyclin-dependent kinases (Fig. 2) [6]. The function of the proteins encoded by E6 and E7 gene during a productive HPV infection is to bind to cellular p53 and pRB proteins, disrupt their functions, and alter cell cycle regulatory pathways, leading to cellular transformation. 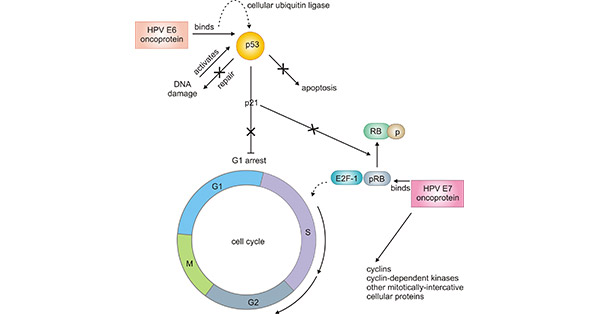 *This figure is derived from the publication on Clin. Microbiol. [4]

5. How is Cervical Cancer Diagnosed?

In terms of diagnosis, doctors usually use many tests to find, or diagnose, cancer. Here, we describe the most common examination and tests for cervical cancer diagnosis. If you are suspected with cervical cancer, your doctor may do a colposcopy to check the cervix for abnormal cells. During the colposcopic examination, your doctor will take a sample of cervical cells for laboratory testing. There are two ways to obtain tissue. One is using punch biopsy, which involves using a sharp tool to pinch off small samples of cervical tissue. Another is using endocervical curettage, which uses a small, spoon-shaped instrument (curet) or a thin brush to scrape a tissue sample from the cervix.

If the biopsy indicates that cervical cancer is really present, the doctor will recommend the woman to a gynecologic oncologist, which is a doctor who specializes in treating cervical cancer. The specialist may suggest additional tests to see whether the cancer has spread beyond the cervix, such as pelvic examination under anesthesia, X-ray, computed tomography (CT or CAT) scan, magnetic resonance imaging (MRI) and positron emission tomography (PET) or PET-CT scan.

6. What are the Treatments for Cervical Cancer?

Treatment for cervical cancer depends on the kind of cervical cancer and how far it has spread. Treatments include surgery, chemotherapy, radiation therapy and a combination of the three.

First, surgery is the typical treatment in the early-stage cervical cancer. According to different size of your cancer, its stage and whether you would like to consider becoming pregnant in the future, there are three options of surgery, including cutting away the cancer only, removing the cervix and hysterectomy.

Third, Radiation therapy uses high-energy rays to kill the cancer. Radiation therapy is often combined with chemotherapy as the primary treatment for locally advanced cervical cancers. It can also be used after surgery if there's an increased risk that the cancer will come back.

7. How to Prevent Yourself from Cervical Cancer?

Actually, cervical cancer is one of the few cancers that's almost totally preventable. It comes down to avoiding HPV, which is sexually transmitted. As mentioned before, HPV is the primary cause of cervical cancer. But it doesn't always cause the disease. Many people have HPV and don't develop cervical cancer.

If you're sexually active, you will be informed to have Pap or HPV tests, which can find abnormal cells in your cervix before the cancer starts. In addition, there's also an HPV vaccine that you might want to get. It targets some of the strains of HPV that are the riskiest. And HPV vaccine is usually the most common way to prevent yourself from cervical cancer.