On January 7, 2021, the US FDA has granted a fast track designation to Zenocutuzumab (MCLA-128) as a potential therapeutic option for patients with metastatic solid tumors harboring NRG1 gene fusions. Early, Journal of Thoracic Oncology has reported cases that antibody significantly shrinks metastatic cancer with NRG1 gene fusions [1-3], which brings the NRG1 fusions into the public view. NRG1 fusions are rare but potential oncogenic drivers. Intriguingly, recent studies show that NRG1 has a dual mechanism against cancer. Whether it is a mechanism of cell death or cell protection, NRG1 will provide new directions for tumor treatment. So, what is NRG1 or NRG1 fusions? How's progress on the NRG1 research in tumors? Today, let's learn more about it.

1. Structure and Function of NRG1

4. The Role of NRG1 in Diseases

1. Structure and Function of NRG1 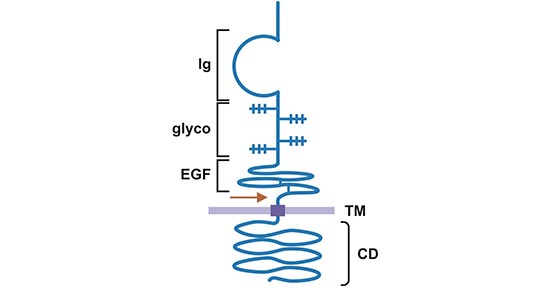 *The figure is derived from a Prolactin publication [6]

NRG1 is mainly expressed in glial cells and neurons as well as in mammary gland, myocardium, lung, kidney, liver and other organs. NRG1 plays an important role in the development of the nervous system, myocardium and mammary gland [4, 5]. It has been found that NRG1β is highly expressed in the nervous system and cardiomyocytes, while NRG1α is often expressed in the mammary gland [7, 8]. In addition, an increasing number of studies have shown that NRG1 fusions are closely associated with the development of a variety of tumors [4, 5].

NRG1 is a member of the EGF ligand family. NRG1 binds to the ERBB family of receptor tyrosine kinases and participates in the biological processes of the cell [9]. There are four ERBB receptors: ERBB1, ERBB2, ERBB3 and ERBB4. NRG1-mediated signaling is mainly associated with ERBB2, ERBB3 and ERBB4 (Figure 2) [6]. In fact, ERBB receptors often form homodimers or heterodimers in every possible combination, which then react with the ligand NRG1. Among them, ERBB2 is unable to form homodimers by itself and requires the participation of ERBB3 or ERBB4 to form heterodimers in order to bind to NRG1. NRG1 acts as an agonist or ligand for ERBB. Upon binding to ERBBs, NRG1 forms the dimeric complex NRG1/ERBBs, which activates the signaling pathway [6, 9, 10]. 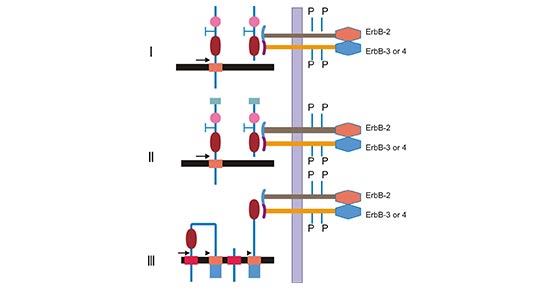 *The figure is derived from the Prolactin publication [6]

In addition, as shown in Figure 3, fusion partners of NRG1, such as CD74, SLC33A2, and SDC4 have been found at low frequency in a wide range of carcinomas. NRG1 gene fusions activates and retains the EFG-like domain of NRG1 protein, providing continuous activation of signaling pathways, causing uncontrolled cell proliferation and leading to tumorigenesis [11]. 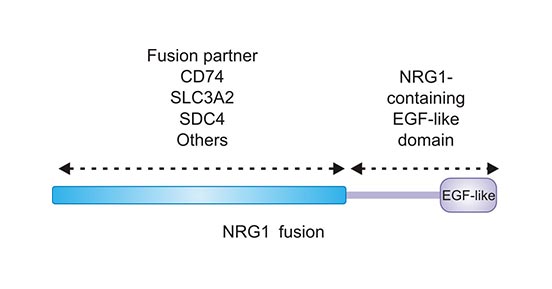 *The figure is derived from the Clinical Cancer Research publication [11] 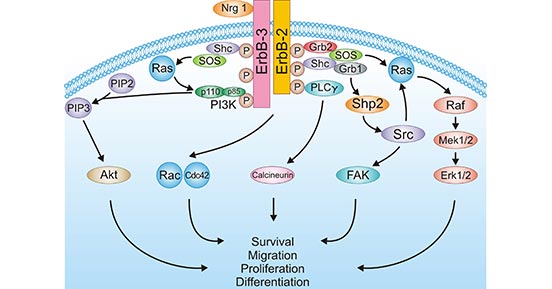 *The figure is derived from the Academic Press publication [13]

4. The Role of NRG1 in Diseases

NRG1 plays a key role in synaptic plasticity. NRG1/ERBB4-mediated signaling is associated with neurological disorders [15]. Furthermore, NRG1 is a susceptibility gene for schizophrenia. It was found that those with high NRG1 expression are more likely to develop schizophrenia than those without [16]. In Schwann cells, NRG1 secretes a variety of neurofactors and bioactive substances to provide support for neural axon regeneration and nerve repair [13].

In addition to the nervous system, NRG1 is essential for normal cardiac development. NRG1 plays an important role in the development and functional maintenance of the heart. It has been shown that intermittent exercise can improve cardiac function by activating myocardial NRG1 [17].

NRG1 plays an important role in nerves, heart and other organs. There is growing evidence that abnormal expression of NRG1 and NRG1 fusions often trigger neurological and cardiac function problems. NRG1 fusion antibody drug JK07, developed by Salubris in the United States, is currently in clinical phase I for the treatment of chronic heart failure. Therefore, with the deep understanding of diseases and the evolution of antibody technology, antibody drugs are slowly penetrating in areas that are not traditional indications for antibody drugs, such as cardiovascular, neurological diseases, gout, infections and neurological diseases.

It is also noteworthy that NRG1 functions as either pro-oncogene or oncogene. NRG1 as a novel target, its mechanism of in tumors needs to be further explored. So far, there are no clinical drugs with anti-NRG1 or NRG1 antibodies under development, which holds a large potential in future market.

In particular, the functions of NRG1 fusion in tumors. Albeit NRG1 fusions are considered as rare oncogenic drivers, current researches have focused on the development of antibodies against this novel oncogenic target. For example, the bispecific antibody Zenocutuzumab (MCLA-128), it has been qualified for Fast Track by the FDA and has shown good efficacy in previously treated pancreatic cancer patients with NRG1 fusions. NRG1 fusions are expected to provide clear, actionable insights for antibody design in tumor-targeted therapy.

In fact, therapeutic antibodies have become the predominant class of new drugs developed in recent years. Major domestic pharmaceutical companies have focused on the design of antibody drugs. The antibody drug, considered as a star product, helps pharmaceutical companies to explore the market. The overall market size of China's antibody drug industry was valued at approximately 54.8 billion yuan in 2020 and is expected to expand to 89 billion yuan in 2022. With the in-depth research on the mechanism of NRG1 in neurology, heart and tumors, NRG1 antibodies or anti-NRG1 antibodies may set off a huge demand in the market with a very promising future.

[10] Wadugu, Brian, and Bernhard Kühn. "The role of neuregulin/ErbB2/ErbB4 signaling in the heart with special focus on effects on cardiomyocyte proliferation." American Journal of Physiology-Heart and Circulatory Physiology 302.11 (2012): H2139-H2147.

[12] Liu, Dawei, and Xinhong Luan. "The Research Progress of Neuregulin 1 in the Reproductive Development." (2015).