On January 28, 2022, the FDA approved the first bispecific antibody Vabysmo (Ang-2 x VEGF-A) for eye, to treat two leading causes of vision loss--wet age-related macular degeneration (AMD) and diabetic macular edema (DME). Intriguingly, days before, the company Innovent Biologics's drug IBI324 from China was accepted for clinical trial application, IBI324 targeting Ang-2 and VEGF-A, by which IBI324 could inhibit abnormal neovascular growth in two different pathways. Noticeably, blocking the formation of tumor blood vessels to curb tumor cell growth and metastasis is becoming a potent strategy in the tumor therapy. Ang-2, as a crucial factor in angiogenesis, not only plays a role as a target in eye diseases, but also exhibits a close relationship with tumor angiogenesis. Hence, how's the function of Ang-2 as an angiogenic factor? What is the clinical potential for Ang-2 targeted treatment? If you are interested, see this article we prepared.

3. How's the Mechanism of Ang-2 in Angiogenesis?

4. Roles of Ang-2 in Tumors and Eye Diseases

5. The Clinical Prospect of Ang-2

ANGPT2 is Angiopoietin-2 (commonly known as Ang-2), which belongs to the angiopoietin (Ang) family. The Ang family consists of four ligands: Ang-1, Ang-2, Ang-3, and Ang-4. Among them, Ang-1 and Ang-2 are closely involved in angiogenesis [1-2], in which Ang-2 knowledge network graph was shown as in Figure 1. Angiogenesis is a complex multi-step physiological process that occurs throughout life both in normal tissues and in disease. It is tightly regulated by the balance between pro-angiogenic and anti-angiogenic factors. The angiogenic switch has been identified as the key step during tumor progression, in which the balance is disturbed. Angiopoietin-2 (Ang-2) is newly identified angiogenic factor after vascular endothelial growth factor (VEGF), which is involved in atherosclerosis, asthma, rheumatoid arthritis, tumors, and other diseases. Recent studies have shown that abnormal expression of Ang-2 is closely associated with ocular diseases [3]. Currently, bispecific antibodies against Ang-2 for the eye are making significant progress in the treatment of retinal diseases such as age-related macular degeneration (AMD) and diabetic macular edema (DME) [4, 5]. 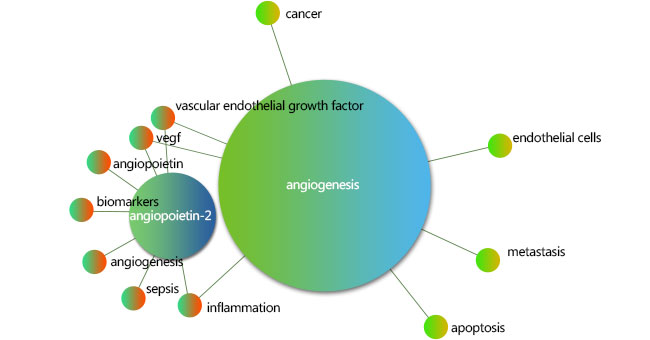 Tyrosine kinase receptor Tie-2 has been identified as the specific receptor for Ang-1 and Ang-2 [6]. Structural data suggested that the two ligands bind Tie-2 similarly. Tie-2 is expressed not only in vascular endothelial cells, but also in hematopoietic stem cells, monocytes, neuronal cells, muscle satellite cells, and tumor cells [7]. Overexpressed Tie-2 has been observed in many diseases, including psoriasis, pulmonary hypertension, and infantile hemangiomas [8-10].

Tie-2, a receptor for Ang family, is a key mediator in the stabilization of blood vessels. It is stated that Ang-2 is highly expressed in the synovial tissue of RA patients. Furthermore, Ang-2 competitively binds to Tie-2, resulting in the inhibition of Ang-1/Tie-2 signaling pathway, inducing the formation of new blood vessels [11]. Another study found that Ang-2 expression is upregulated in several human cancers. Beyond this, the increased expression Ang-2/Tie-2 axis could lead to vascular instability and tissue hypoxia, which contributes to the increased tumor vascular density, tumor metastasis, and reduced survival in patients [12].

3. How's the Mechanism of Ang-2 in Angiogenesis?

As mentioned earlier, both Ang-1 and Ang-2 are involved in angiogenesis, which partly responsible for tumor angiogenesis, but the specified mechanisms remain unclear. Initially, Ang-2 was considered as a competitive antagonist of Ang-1 on endothelial cells, and downregulation of Tie-2 could deregulate the inhibitory effect of Ang-1 on vascular endothelial cells. Recent studies revealed that Ang-1 serves as an agonist of Tie-2, while Ang-2 is a weak agonist or antagonist of Tie-2. In another words, Ang-2 acts as a weak agonist when Ang-1 is not present, otherwise as an antagonist.

Currently, increasing evidence suggests that Ang-2 can play an augmentory role in angiogenesis process as follows: in hypoxia or inflammatory conditions, it will cause abnormal release of Ang-2, which acts as an antagonist of Ang-1. Ang-2 competitively binds to Tie-2, thus blocking the vascular stabilizing effect of Ang-1, leading to the disconnection of endothelial cells from surrounding cells，causing endothelial cell instability, resulting in vascular destabilization and endothelial activation. Under the presence of VEGF, it will synergize with Ang-2 to promote endothelial cells to receive sprouting signals from angiogenic inducers such as VEGF, resulting in sustained neovascularization in tumor tissue [13] (Figure 2). Presently, Ang-2/Tie-2 is highly expressed in a variety of tumors, which plays important role in tumor microvessel density, clinical staging, and prognosis. Therefore, Ang-2 is expected to be a key anti-tumor angiogenic target. 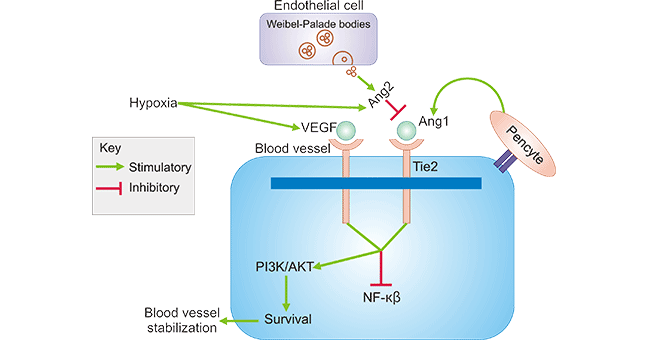 Figure 2. The Mechanism of Ang-2 in Angiogenesis

4. Roles of Ang-2 in Tumors and Eye Diseases

Ang-2, as a newly discovered endothelial cell-specific expression molecule, numerous studies suggested that Ang-2 induces reactivation of vascular endothelial cells and triggers the process of angiogenesis, which is associated with a variety of diseases, particularly, its essential role in tumor and eye diseases.

For example, it is stated that Ang-2 are involved in the growth and metastasis of breast cancer. Its high expression can lead to regulation disorders such as vascular repair and reconstruction in breast tissue, leading to the development of breast cancer [14]. In colorectal cancer, immunohistochemical assays showed that Ang-2 protein expression level was not related to the degree of tissue differentiation and lymph node metastasis, whereas its expression was associated with the depth of intestinal wall infiltration and metastasis of blood vessels or lymphatics. In normal intestinal mucosal tissues, Ang-2 expression was lower than that of intestinal adenoma. But its high expression enhances the cell proliferation in colorectal cancer [18]. Therefore, targeting Ang-2 might shed some lights on tumor treatment.

Over the past few years, Ang-2 have also been emerging as a potential target in eye diseases. Notably, researchers make dramatic breakthroughs in the treatment of age-related macular degeneration (AMD), diabetic macular edema (DEM), and diabetic retinopathy (DR).

AMD is an eye disease leading to severe visual loss and legal blindness in the elderly population. Its pathogenesis, likely multifactorial, involving a complex interaction of metabolic, functional, genetic, and environmental factors, remains poorly understood. For these reasons currently used therapeutic approaches are inquietly effective; DEM is manifested as retinal thickening caused by the accumulation of intraretinal fluid, primarily in the inner and outer plexiform layers. It is believed to be a result of hyperpermeability of the retinal vasculature. DME can be present with any level of diabetic retinopathy and have a very high recurrence rate after treatment. DR refers to

an eye disease caused by retinal microvascular damage due to diabetes. Damaged blood vessels and abnormal new ones can cause vision loss. Increasing evidence confirmed that Ang-2 expression contributes to the development of ocular fundus diseases like AMD [21], DEM [22], and DR [23]. As of now, Ang-2 is very likely to be the next drug candidate for the treatment of eye diseases.

5. The Clinical Prospect of Ang-2

At present, there are several drugs targeting Ang-2 in clinical or preclinical stages. Of note, over 1700 Ang-2 related projects are studied based on data from ClinicalTrails. More pharmaceutical companies are beginning to secure a place on Ang-2, including Pfizer, AstraZeneca, Amgen, Regeneron, Roche, Innovent Biologics, and others. In addition to Ang-2 monoclonal antibodies, bispecific antibodies targeting Ang-2 x VEGF attract more interest, because Ang-2 combined with VEGF can further promote angiogenesis. Remarkably, Roche's bispecific antibody Vabysmo ™ (faricimab-svoa) has been approved by the FDA. Ang-2, as important pro-angiogenic stimulator, many studies have demonstrated that blocking Ang-2 can significantly restrain angiogenesis and inhibit tumor growth, invasion, and metastasis. Taken together, Ang-2-based dual or multi-targeted drugs will bring new insights in the treatment of tumor or eye diseases.

To fully support pharmaceutical companies in ANGPT2/Ang-2 based drug research for tumor or eye diseases, CUSABIO is offering ANGPT2 active protein product (Code: CSB-MP001707HU(A4)) to help you in your research on ANGPT2 mechanism or its potential clinical value.

Purity was greater than 92% as determined by SDS-PAGE. (Tris-Glycine gel) Discontinuous SDS-PAGE (reduced) with 5% enrichment gel and 15% separation gel.

[23] Rangasamy, Sampathkumar, et al. "A potential role for angiopoietin 2 in the regulation of the blood-retinal barrier in diabetic retinopathy." Investigative ophthalmology & visual science 52.6 (2011): 3784-3791.