FAP may be a drug target for pancreatic cancer

FAP, which is a transmembrane cell surface proteinase, belongs to the serine protease family. Expression of FAP has been detected in cancer-associated fibroblasts of many human cancers, such as pancreatic cancer, breast cancer, colorectal cancer, and cervical cancer. Some studies uncovered that FAP depletion suppresses cancer cell proliferation and metastasis in experimental animals.

For the current study, a team consisting of researchers from the University of Pennsylvania in the USA, National Yang-Ming University School of Medicine, and Academia Sinica in Taiwan further explored the role of FAP in pancreatic cancer. Using immunofluorescent staining method, the team examined FAP expression in clinical specimens collected from patients with pancreatic cancer and discovered that the level of FAP was much higher in stromal cells in pancreatic tumors than that in adjacent normal pancreatic tissues. Similar results were found in FAP luciferase reporter knockin mice. Investigating the association between FAP level and patient outcome, the team found that high FAP level could predict shorter survival.

To conclude, the data support a role of FAP in augmenting progression and metastasis of pancreatic cancer. Therefore, FAP might be a new target for drug therapy in this deadly disease.

Dr. Ellen Puré, a professor at the University of Pennsylvania School of Veterinary Medicine and the corresponding author of this study, noted that their study is the first to demonstrate that FAP contributes to metastasis.

The laboratory of Dr. Puré is focusing on the cellular and molecular basis of inflammation and fibrosis. Their recent studies explore the function of FAP and other molecules in human disease.


Cause and risk factors of pancreatic cancer

Pancreatic tumors have profoundly oncogenic alterations, which occur in high frequencies. These alterations drive growth and cell survival and alter the metabolism of pancreatic cancer. There are also rare alterations, that are found in effectively unique combinations in each patient. All these genetic alterations may imply an ability to rapidly develop acquired resistance to therapies[5].

During the past several decades, there has been an overall reduction in cancer-related death in developed countries, in particular for lung, breast, colorectal and prostate cancer. However, for pancreatic cancer, the mortality rates are increased. Pancreatic cancer is a highly aggressive cancer that kills more than half of all its victims within 6 months after diagnosis. Nearly all diagnosed patients ultimately succumb to the disease. Why is pancreatic cancer so lethal? There are several reasons:

Pancreatic cancer often grows fast and spreads microscopically early in the disease course. When diagnosed, only 7% of pancreatic cancers are considered localized disease, which is alarmingly low compared to other cancers[6]. This means that most patients with pancreatic cancer are not suitable to undergo a surgery because their cancer has spread from its primary site to distant organs and complete resection of tumors by surgery is usually impossible.

Our understanding of what drives the development and metastasis of pancreatic cancer is far from complete. There is a lack of markers of early detection as well as a lack of targets for treatment. At the early stage of pancreatic cancer, symptoms such as weight loss, abdominal pain, the onset of diabetes, unexplained jaundice, and unprovoked thrombosis may occur. However, these symptoms are non-specific and may also appear in other diseases.

For breast, prostate, melanoma, and testicular cancers, simple examinations can evaluate the condition. In contrast, the pancreas is buried deep in the abdomen behind the stomach, making it hard to access. 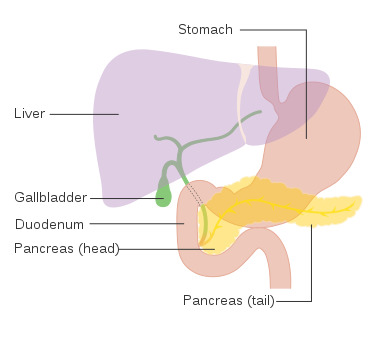 For these reasons, pancreatic cancer often goes unnoticed until it is too late. Once metastasis occurs, it's hard to treat. For advanced pancreatic cancer, there are still treatment options, but the most efficacious are also the most burdensome.

Recurrence of pancreatic cancer after treatment is another factor that contributes to the dismal prognosis. Despite treatment at early stages, there is a 40% chance of recurrence.

Fig. 2 Metastasis and prognosis of pancreatic cancer compared with other cancers