Recently, international academic Journal Clinical Cancer Research published a study entitled "AMG 757, a half-life extended, DLL3-targeted bispecific T-Cell engager, shows high potency and sensitivity in preclinical models of small-cell lung cancer". It suggested that AMG 757, a novel therapeutic agent targeting DLL3, has a compelling safety and efficacy profile in preclinical studies making it a viable option for DLL3-expressing SCLC tumors [1]. In this regard, on European Lung Cancer Conference 2021 (ELCC Virtual 2021) which has just concluded, DLL3 is considered as a promising new target in clinical treatment for SCLC. Currently, more and more researchers are looking for DLL3-targeted agents to treat tumors. But, what is DLL3? How's the progress of DLL3 in tumor research? Today, let's get to know it.

1. What is the Structure and Function of DLL3?

2. What are the Receptors for the Ligand DLL3?

3. How Does the DLL3-Mediated Signal Transduction Pathway?

4. The Role of DLL3 in Tumor Diseases

6. What Reagents You May Need for DLL3-Targeted Research?

1. What is the Structure and Function of DLL3?

Delta-Like Ligand 3 (DLL3), a single transmembrane protein that attaches to the cell surface, is a member of the Notch ligand family. The human DLL3 gene is localized on chromosome 19q13 and has an open reading frame length of approximately 1800 bp [2]. The human DLL3 protein consists of 619 amino acids and is characterized by a Delta/Serrate/LAG-2 (DSL) domain, six epidermal growth factor (EGF)-like repeats, and a transmembrane domain (Figure 1) [3, 4]. The DSL gene sequence at the extracellular N-terminal domain is highly conserved in the ligand family, which is an essential structure for binding to the Notch receptor. DLL3 is composed of short intracellular domain and its function remains unclear. It is rarely expressed in normal tissues, but many findings suggested that DLL3 is highly expressed in SCLC and other neuroendocrine tumors, which offers potential for DLL3-targeted therapeutic design [5]. In recent years, an increasing number of studies suggested that DLL3 can bind to different Notch receptors and participate in complex biological activities, exerting pro- or anti-cancer effects. 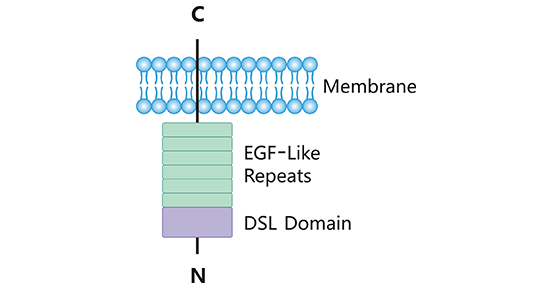 Figure 1. The structure of DLL3

*The figure was derived from Frontiers in Immunology publication [3]

2. What are the Receptors for the Ligand DLL3? 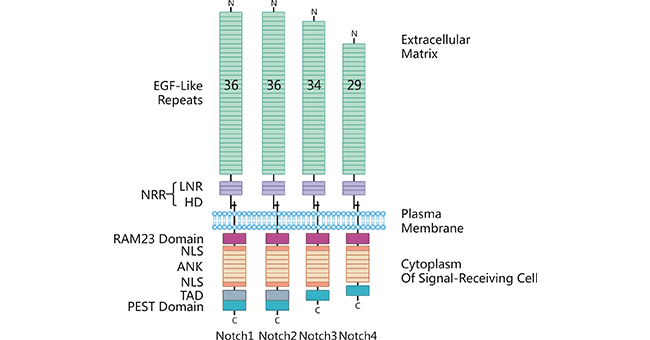 Figure 2. The structure of receptor Notch 1-4

*The figure was derived from Frontiers in Immunology publication [3]

Unlike other Notch ligands, the current researches suggested that DLL3 is an inhibitory Notch ligand. The ligand DLL3 binds to Notch receptors and has an inhibitory effect on the Notch signaling pathway [7]. In SCLC, DLL3 could bind to Notch1 receptor, leading to the inhibition of Notch signaling pathway. As the Notch signaling pathway targeted genes, the expression levels of HES1 and HEY1 were down-regulated, which contributed to the deregulation of tumor and promoted the SCLC development [8]; Besides, DLL3/Notch2 could increase the cell cycle protein expression (CyclinD1 and CyclinD3), suggesting that DLL3/Notch2 may promote the proliferation of SCLC cells by upregulating expression levels of cell cycle proteins [9]. In addition, the binding of DLL3 and Notch receptor is closely associated with other tumors. For example, DLL3/Notch2 is involved in the regulation of proliferation and invasion of pituitary adenomas [10]; DLL3/Notch2/Notch4 binding is essential for melanoma cell growth and survival [11]; DLL3/Notch2/Notch3 binding in ovarian cancer mediates cell proliferation and differentiation, which are associated with poor survival [12]. Overall, DLL3 could bind to different Notch receptors and play multiple roles in cell proliferation, differentiation, and apoptosis. However, the exact molecular mechanisms still remain unknown.

3. How Does the DLL3-Mediated Signal Transduction Pathway?

DLL3 may participate in several signaling pathways, involving the activation and expression of a series of genes. And DLL3 in tumorigenesis plays an oncogenic or tumor-suppressive role depending on the cellular context. Therefore, further studies on the expression and mechanism of DLL3 in various tumors will be of great significance to the pathogenesis, treatment, and prevention of tumors.

4. The Role of DLL3 in Tumor Diseases

In primary hepatocellular carcinoma (HCC), it has been suggested that DLL3 expression is inhibited by hepatitis B virus-induced DNA methylation and histone acetylation. Inhibitors of histone deacetylase could restore DLL3 expression in HCC. The re-expressed DLL3 could inhibit cell growth and induce apoptosis in primary hepatocellular carcinoma [22].

Additional studies have shown that DLL3 is aberrantly expressed in a variety of cancers, exerting different functions. For example, DLL3 is highly expressed in neuroglioma cells with isocitrate dehydrogenase (IDH) mutations, as well as in glioma cells with 1p/19q deletion [23, 24]; in pancreatic cancer, activated DLL3 could stimulate Notch signaling pathway and thus promote tumor cell growth [25]; in melanoma, the DLL3/MAPK signaling pathway could enhance cell proliferation and migration [26, 27]; in endometrial tumor, high expression of DLL3 is associated with poor survival and progression-free survival [28].

In recent years, the immunotherapeutic approach targeting DLL3 has been identified in clinical trials. Rova-T (Rovalpituzumab tesirine) is a first-in-class antibody-drug, which is currently in clinical phase III, albeit the results of clinical phase II were unsatisfying. AMG-757 developed by Amgen is a bispecific antibody targeting DLL3/CD3. AMG757 for SCLC is under evaluation in a phase I clinical study. Other therapeutic agents in the clinical phase include HPN-328 and 89Zr-DFO-SC16.56. DLL3, as an important Notch ligand, is closely related to the tumorigenesis. More pharmaceutical companies are involved in the development of DLL3-targeted agents. Ongoing clinical trials of DLL3-targeted agents were shown in the table below.

*This data was derived from pharmacodia

6. What Reagents You May Need for DLL3-Targeted Research?

[3] Steinbuck, Martin Peter, and Susan Winandy. "A review of notch processing with new insights into ligand-independent notch signaling in T-cells." Frontiers in immunology 9 (2018): 1230.