EGFR and Its Application in Cancer Therapy

2. The Structure of EGFR Protein

HER family members also include HER2 (erbB2, NEU), HER3 (erbB3) and HER4 (erbB4), which play an important regulatory role in the cellular physiological process.

EGFR is located on the surface of the cell membrane and is activated by ligands such as EGF to induce intracellular tyrosine kinase activation by dimerization, and further activates downstream cell signaling pathways to complete transmembrane signal transduction. EGFR plays an important role in signal transduction, cell proliferation, differentiation and various regulatory mechanisms, but it is often over-expressed and out of control in human tumors, and thus has become a hot spot in tumor diagnosis and treatment research.

2. The Structure of EGFR Protein

The hEGFR gene is located on human chromosome 7p, and its encoded product is a single-strand transmembrane protein containing 1210 amino acid residues with a molecular weight of 134 kDa. The peptide fragment is further glycosylated at the 11th to 12th aspartic acid residue and its molecular weight increases to 170 kDa, becoming a mature EGFR.

cDNA cloning revealed that human and murine EGFR structures are approximately 80% homologous, indicating that EGFR is highly conserved in evolution.

The extracellular region is a 621 amino acid residue at the N-terminus, comprising the binding domain of the ligand EGF, and it can be further subdivided into regions I to IV.

The transmembrane region is a helical hydrophobic region composed of 23 amino acid residues, which is linked to the extracellular region by a proline to immobilize the receptor on the membrane.

Figure 2 The structure of EGFR 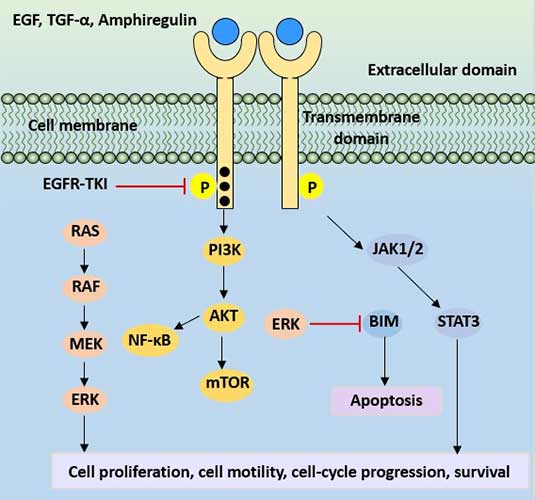 EGFR is widely distributed on the surface of mammalian epithelial cells, fibroblasts, glial cells, keratinocytes, etc., and is closely related to tumor cell proliferation, angiogenesis, tumor invasion, metastasis and inhibition of apoptosis. The overexpression of EGFR plays an important role in the evolution of malignant tumors, and EGFR expression and function abnormalities exist in various human malignant tumor tissues and tumor cell lines. In many solid tumors, such as lung cancer, breast cancer, ovarian cancer, cervical cancer and prostate cancer, it has been found that a large proportion of tumor patients have high or abnormal expression of EGFR, as shown in the following table.

Interference therapy in signal transduction is to use monoclonal antibodies, immunotoxins, tyrosine kinase inhibitors, antisense nucleotides, dominant negative mutants and other substances to interfere with the abnormal part in signal transduction pathway, so as to achieve the purpose of inhibiting tumor growth.

The overexpression and/or mutations of EGFR in many tumors are closely related to the occurrence, development and prognosis of many tumors, providing theoretical basis and experimental basis for EGFR-targeted tumor therapy and interference therapy targeting EGFR signal transduction pathway. Currently, the most common treatments available are monoclonal antibody drug intervention and tyrosine kinase inhibitor drug intervention.

EGFR monoclonal antibodies can bind to EGFR, compete with and block the binding of ligands such as EGF and TGFα. It can also be coupled with anticancer drugs or toxins to inhibit the proliferation of human tumor cells expressing EGFR and induce apoptosis.

At present, the indications approved by Erbitux in the world are: Metastatic head and neck cancer, non-metastatic head and neck cancer, metastatic colorectal cancer, non-small cell lung cancer, etc. Cetuximab binds EGFR specifically with an affinity about 5 to 10 times higher than that of endogenous ligands, hinders the binding of endogenous ligands of EGFR, thus inhibiting the function of the receptor, and further induces EGFR endocytosis, leading to the down-regulation of the receptor number.

The monoclonal antibodies target and destroy only certain cells in the body, which may help protect healthy cells from damage. Necitumumab is used to treat certain types of non-small cell lung cancer and is usually used in combination with other cancer drugs.

The development of antibody drugs is a hot spot in the global biotechnology industry and occupies an extremely important position in the field of biopharmaceutical, which is considered to be one of the mainstream directions of current biomedical research and development. Globally, biologic drugs account for 60% of the research projects targeting EGFR.

The first-generation inhibitors are adenine loops that mimic ATP. By competing with ATP at the ATP binding site of the EGFR kinase domain, they interfere with the auto-phosphorylation of the EGFR kinase domain and inhibit the activity of EGFR, thereby blocking the downstream signal transmission pathway, inhibiting the growth of tumor cells and promoting cell apoptosis.

Since most patients with first-generation inhibitors will develop drug resistance, researchers have gradually developed a second generation of EGFR inhibitors (irreversible covalent inhibitors).

The second-generation inhibitors have a series of serious dose-dependent side effects, such as rash, diarrhea, nausea, fatigue, etc., which will affect the clinical therapeutic effect. Therefore, the development of the third generation of EGFR kinase inhibitors has been promoted.

Currently, monoclonal antibody drugs targeting the extracellular domain of EGFR are available. These monoclonal antibodies have the characteristics of strong targeting and less toxic side effects. They are clinically combined with radiotherapy for the treatment of EGFR-positive tumors and have achieved certain efficacy.

However, there are still some problems with anti-EGFR antibody drugs at present. Anti-EGFR monoclonal antibodies cannot be used alone in the treatment of tumors and need to be combined with radiotherapy or chemotherapy. In addition, there are few types of tumor treatment in clinical practice, which to some extent limit the clinical use of anti-EGFR monoclonal antibodies.

Small molecule inhibitors targeting EGFR receptor tyrosine kinase emerge one after another and show good activity in clinical studies. All these provide reference for the design and development of small molecule EGFR inhibitors with better activity and stronger selectivity in the future. However, the problem of drug resistance due to mutations is still not fully solved, and the development of mutant selective EGFR inhibitors is still urgent. In conclusion, anti-tumor therapy targeting EGFR has become one of the most active fields in cancer research and has made great progress. However, anti-tumor therapy targeting EGFR still has many defects to be improved. CUSABIO provides highly active EGFR recombinant protein to facilitate the research of anti-tumor drugs targeting EGFR.