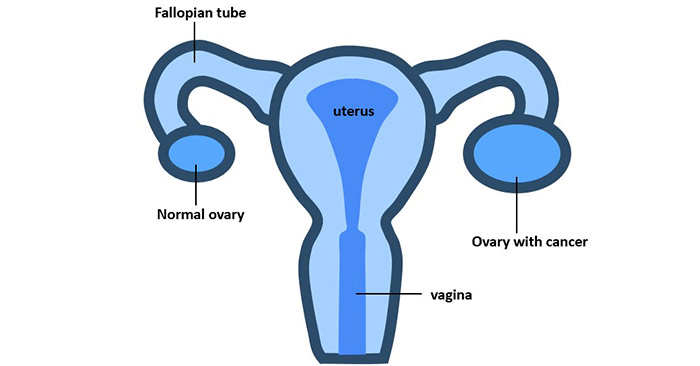 According to the origin of tumor cells, ovarian cancer can be divided into three types: epithelial tumor, stromal tumor and germ cell tumor.

Germ cell tumors are derived from germ cells of the ovary. It usually happens to young people. In addition, there are metastatic tumors, which refer to malignant tumors originating from other organs, including the digestive tract and other organs of the gynecology.

This seriously affects the survival of patients with ovarian cancer. Therefore, ovarian cancer is also known as the "silent killer".

Symptoms in the early stages of ovarian cancer are often vague and can easily be attributed to other causes. So if these symptoms appear, you should be alert to whether it is related to ovarian cancer.

Early signs of ovarian cancer include bloating, abdominal and/or pelvic pain, fatigue and shortness of breath [2], lower body pain, lower abdominal pain, back pain, indigestion or heartburn, rapid satiety when eating, frequent and urgent urination, painful intercourse, and changing bowel habits, such as constipation. As ovarian cancer progresses, it can also cause nausea, weight loss and loss of appetite.

If these symptoms occur frequently, you need to see a doctor as soon as possible. The cause of ovarian cancer is unclear. However, genetic factors, reproductive factors, environmental factors and lifestyle factors may all play a role.

Compared with other women, the incidence of ovarian cancer increased significantly in women with a family history of ovarian cancer, breast cancer, endometrial cancer, and colorectal cancer. For these people, genetic screening can be used to determine whether someone carries a gene associated with an increased risk.

Women diagnosed with breast cancer are at higher risk for ovarian cancer.

Compared with women who did not give birth, women who gave birth had a reduced risk of all subtypes of ovarian cancer, with the most significant reduction in the risk of clear cell carcinoma.

People with a history of infertility have an increased risk of ovarian cancer, and infertility treatment may also increase the risk.

Some studies have shown that tubal ligation can significantly reduce the risk of ovarian cancer by up to 70%.

HRT increases the risk of ovarian cancer in postmenopausal women [7]. The longer the HRT lasts, the greater the risk, and once the treatment is stopped, the risk returns to normal.

Endometriosis is a disease in which endometrial tissue-like tissue grows outside the uterus. Women with endometriosis have a 30% higher risk of ovarian cancer than other women.

People who are obese or overweight have a higher risk of cancer. Studies have shown that obesity is also a possible risk factor for ovarian cancer after menopause [8].

3.10 Environment and Other Factors

Epidemiological data suggest that various physical or chemical products of the industry may be associated with the onset of ovarian cancer. 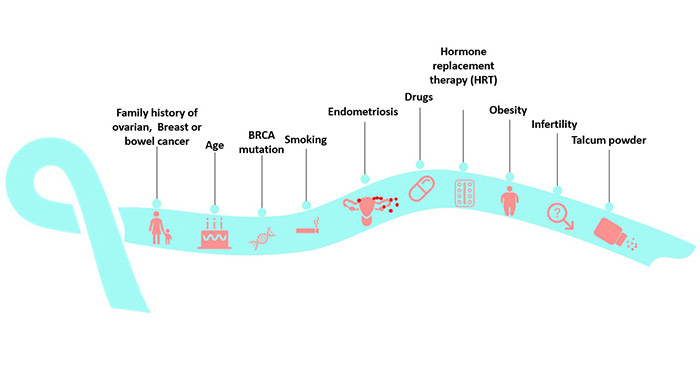 The typical symptoms of ovarian cancer are not obvious in the early stage, and there is still no proper screening method, which leads to its high mortality rate, making it the third most malignant tumor in the female reproductive system. Finding effective methods for early diagnosis and improving the specificity of diagnosis are the focus of ovarian cancer diagnostic research.

The following tests are used to diagnose ovarian cancer:

Blood test: Tumor marker CA125 and human epididymis protein 4 (HE4) are the most valuable tumor markers in ovarian epithelial cancer.

In addition to these two tumor markers, there are several other markers:

Many new tumor markers are still being studied, such as serum macrophage colony-stimulating factor (M-CSF) and lysophosphatidic acid (LPA). The positive rate in serum of LPA ovarian cancer patients was high [11].

Laparoscopy: a laparoscope (a thin observation tube with a camera at the end) is inserted into the patient through a small incision in the lower abdomen.

Colonoscopy: If the patient has symptoms of rectal bleeding or constipation, the doctor may ask for a colonoscopy of the large intestine (colon).

CT Scan: CT scan is used to detect ovarian lesions, which can clearly show the location, size and relationship of the tumor to adjacent organs and tissues. It is also used for tumor location, characterization, and staging.

Genomics and Proteomics Assays: most of these techniques are currently in the laboratory. In addition, the doctor will also perform a vaginal examination to confirm whether the uterus or ovary is abnormal. It is also necessary to inquire about the patient's history and family history. For women with confirmed ovarian cancer, doctors need to determine the stage and grade.

Surgery for ovarian cancer includes total hysterectomy, bilateral ovariosalpingectomy, tumor reduction, omentectomy [12]. If patients want to preserve their reproductive function, they can have the accessory resection of the affected side, but this also provides more opportunities and risks for the further deterioration of the tumor.

In addition to surgery, chemotherapy is also an important way to treat ovarian cancer patients. Chemotherapy can be used for cancer cells that cannot be removed surgically. At present, paclitaxel combined with platinum drugs is still the first-line chemotherapy drugs for ovarian cancer.

Compared with traditional chemotherapy, targeted therapy has less damage to normal cells and has fewer side effects. In the targeted therapy of ovarian cancer, the use of antibody drug conjugates (ADCs) greatly increases the specificity of the coupled drug.

3C12 is a monoclonal antibody of Sp17, which is coupled with doxorubicin (DOX) to form an antibody drug conjugate 3C12-DOX. The 3C12-DOX conjugate has obvious tumor suppressing effects in vitro and in vivo, and its safety is superior to that of the chemotherapy drug DOX [17].