Parkinson's disease (PD), also known as parkinsonism, is a complex neurodegenerative disease (also known as cognitive disorder) second only to Alzheimer's disease [1], which mainly affects the neurons of dopamine production (dopaminergic) in specific areas of the brain (substantia nigra). The disease can cause progressive dyskinesia and non-dyskinesia. Clinical symptoms are bradykinesia, trembling at rest or stiffness [2].

2. Data and Facts about Parkinson's Disease

4. What Happens When You Have Parkinson's Disease?

Parkinsonism is a term for a disease that has similar symptoms to Parkinson's disease. Mainly includes the following types:

It is the most common type of parkinsonism. Idiopathic means that the cause is unknown. The main symptoms of idiopathic Parkinson's are tremor, rigidity (stiffness) and slowness of movement.

A small percentage (about 7%) of people who diagnosed with Parkinson's disease develop symptoms after receiving specific medications.

1.4 Other Types of Parkinsonism 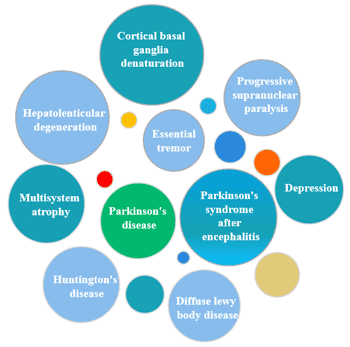 2. Data and Facts about Parkinson's Disease

Gender: Men are 1.5 times more likely than women to have Parkinson's disease.

Race: There is a racial difference in prevalence, with whites being the highest, followed by yellows and blacks being the lowest. 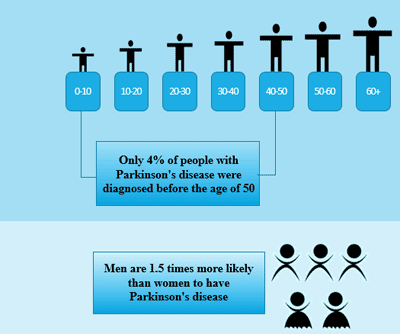 2.3 The Case of Parkinson Disease

When famous people disclose their illness, it helps to raise people's attention to the disease and increase their awareness and understanding of the disease.

Michael j fox (diagnosed in 1991) is one of the world's most famous patients with Parkinson's disease. He devoted his life to the further development of Parkinson's research and established the Michael j fox Parkinson research foundation.

Brian Grant (diagnosed as Parkinson's disease in 2008) and established the Brian Grant Foundation to help others do the same.

There are several theories:

In conclusion, multiple factors in the above pathogenesis synergize, mutually cause and effect each other, and the vicious cycle leads to selective destruction of substantia nigra neurons, neurobiochemical changes such as dopamine synthesis and secretion reduction, as well as a series of changes in basal ganglia loop, and eventually a variety of clinical manifestations of Parkinson's disease.

Although the etiology of Parkinson's disease is still under investigation and has not been fully established, the absence of neurotransmitter dopamine is the main cause. It is also related to genetic factors, environmental factors, patient factors and so on. 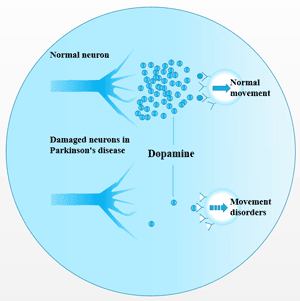 Figure 3 The main cause of Parkinson's disease

Pathogenic mutations of autosomal dominant Parkinson's disease genes SNCA, LRRK2 and VPS35 account for about 0.1% to 30% of Parkinson’s disease, which depends on family history, age of onset and population background [5] [6].

Mutations in the gene encoding glucocerebrosidase are the strongest genetic risk factors for this disease [7].

The enrichment of rare inherited variation in the pathway controlling mitochondrial DNA replication and repair influences the risk of PD，Most mutations in genes that cause familial PD, including SNCA [8], LRRK2, PINK1, PRKN, and VPS35, have been shown to disrupt mitochondrial quality control. The induction of Parkinson phenotype in zebrafish larvae supports the contribution of mitochondrial superoxide generation to PD development [9].

Occupations: certain occupational categories or titles are associated with higher rates of PD. Stress at work increases the risk of Parkinson's disease.

Pesticide exposure: Pesticides (including cypermethrin and hexachlorocyclohexane) have been reported most consistently in all chemical exposures associated with Parkinson's disease.

Contact with metals: Occupational exposure to various metals is considered to be related to the development of PD.

4. What Happens When You Have Parkinson's Disease? 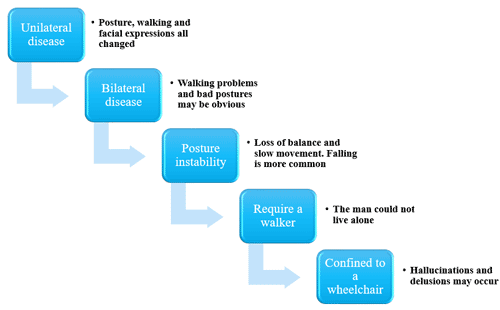 Resting tremor (arm, lower limb tremor), bradykinesia, muscle rigidity (face stiffness or limb stiffness) and posture gait disorder. As the disease progresses, further gait defects may occur, such as hesitation, transition, and frozen gait at the beginning of the exercise.

The incidence of Parkinson's disease increases with age, with 1% of people over 65 years old and 3% of people over 80 years old affected [15]. Young Onset Parkinson Disease (YOPD) occurs in people under 50 years of age. In rare cases, Parkinson-like symptoms may occur in children and adolescents. People diagnosed with YOPD have a more frequent family history of Parkinson's disease and a longer survival period. 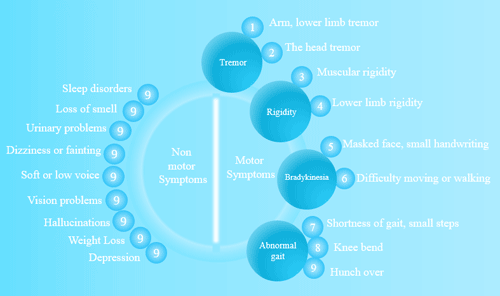 If you're worried that you might have Parkinson's disease, you should see a Parkinson's specialist for a diagnosis.

5.1 How Parkinson's Disease Is Diagnosed?

The disease is difficult to diagnose, especially in its early stages, and it is often diagnosed through medical history assessments, neurological tests, and in some cases, brain scans or laboratory tests.

Clinicians should perform a complete neurological examination of patients with suspected Parkinson's disease. Special attention should be paid to the assessment of extraocular movements, facial expressions, volume, torso and limb movement speed, muscle tone and gait [16].

If you have at least two of the following three symptoms, you may be diagnosed with Parkinson's disease.

If your symptoms improve after taking a drug called levodopa, you are more likely to develop Parkinson's disease.

In addition, scientists are looking for ways to identify PD's biomarkers that can lead to earlier diagnoses and more targeted treatments to slow the disease's progression. Eyesight abnormalities in Parkinson's disease have potential value as biomarkers [17].

If you're a Parkinson's patient or suspected of Parkinson's, you can contact Parkinson UK, Parkinson supports and research charities.

Such as deep brain stimulation or tissue resection.

A healthy and balanced diet can improve overall health. Many people with Parkinson's disease, including the famous advocate Michael J. Fox, say that a healthy diet helps to alleviate symptoms.

Parkinson's disease diet: The ketogenic diet may even be beneficial for diabetes, cancer, epilepsy and Alzheimer's disease [18] [19]; Green tea may have a protective effect on neurons; people who drink coffee [20] are at a much lower risk of developing Parkinson's disease.

Reduce toxicity and chemical exposure: Studies have shown that rural living, well water exposure, pesticide and herbicide exposure are all linked to Parkinson's disease, so eating more or all organic food is very beneficial and protective. Chelation also helps reduce the accumulation of heavy metals and the presence of other toxins.

Exercise therapy may be helpful in improving the symptoms of Parkinson's disease and even delaying the progression of the disease [21]. Patients with Parkinson's disease often have gait freezing, posture balance disorder, language and/or dysphagia, and can perform rehabilitation or exercise training according to different mobility disorders. Perform language barrier training, gait training, posture balance training, etc. Exercise and physical therapy are key to gait and balance symptoms that cannot be improved with medication.

In addition, there are music therapy [22] and speech therapy for Parkinson's disease [23].