1. What Is Amyotrophic Lateral Sclerosis?

1. What Is Amyotrophic Lateral Sclerosis?

The term amyotrophic comes from the Greek root, meaning no nutrients to the muscles. It refers to the loss of signal that nerve cells pass to muscle cells. Lateral refers to one side, the location of spinal cord injury. Sclerosis means hardened and refers to the hardened nature of the spinal cord in advanced ALS. The disease, commonly known as Lou Gehrig's disease in the United States, is named after Lou Gehrig, a Yankee baseball player who was diagnosed with ALS at the Mayo Clinic in 1939.

According to clinical symptoms, it can be roughly divided into two types:

Medullary Onset: There are already difficulties in swallowing and speaking when the movements of the limbs are still good, and soon progress to respiratory failure.

Currently, it is believed that the mechanisms related to ALS may be caused by glutamate excitability, free radical production, cytoplasmic protein aggregation, complex interactions of SOD1 enzyme, mitochondrial dysfunction, and destruction of axon transport process by accumulation of intracellular neurofilament aggregates. Mutations of TARDBP and FUS lead to the formation of intracellular aggregates that are harmful to neurons. In addition, it was also found that the influence of astrocytes and microglia on the motor neuron microenvironment is also one of the causes of ALS [2]. The pathogenesis is incompletely understood, but defects of RNA processing and protein clearance may be fundamental. 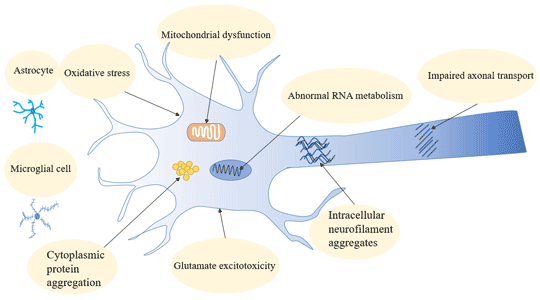 The cause of amyotrophic lateral sclerosis is still unknown. It may be related to heredity and genetic defects. In addition, some environmental factors, such as heavy metal poisoning, may cause damage.

The hexanucleotide GGGGCC repeat amplification of the open reading frame 72 gene (C9orf72) on chromosome 9 is the most common genetic cause of known ALS, accounting for 30% to 40% of familial ALS, and can also cause frontotemporal dementia ( FTD) [5] [6].

Rare mutations in TDP43 are also associated with ALS and FTD [7] [8]. In addition, there is a correlation between DNA methylation and ALS [9].

Excitations of excitotoxicaminoacids and freeradicals resulted in the death of motor neurons.

For example, the researchers suggest that exposure to lead, pesticides, and other environmental toxins during war or intense physical activity may be the cause of increased risk of amyotrophic lateral sclerosis in some veterans and athletes.

As a complex disease, both genetic and environmental factors play an important role in the occurrence and development of ALS.

Fortunately, ALS cannot be "infected" or transmitted from one person to another.

In amyotrophic lateral sclerosis, both upper and lower motor neurons degenerate or die leading to muscle atrophy. Gradually, all muscles under autonomous control are affected, and individuals lose power and the ability to speak, eat, move, and even breathe. According to its progress, it can be divided into several stages: Early Stages, Middle Stages, Late Stages, At the End. 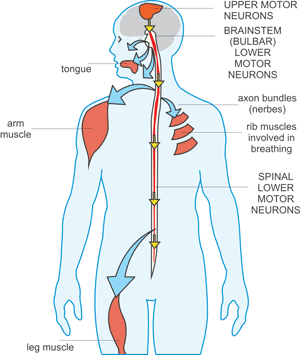 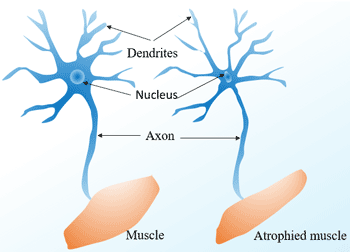 Figure 3 Differences between normal and ALS patients in muscle

In the late amyotrophic lateral sclerosis (ALS) stage, most of the voluntary muscle paralysis. Involuntary muscles in patients with amyotrophic lateral sclerosis, such as muscles that control heartbeat, gastrointestinal tract, intestines, bladder, and sexual function, are not directly affected. Feelings such as sight, hearing and touch are also unaffected.

As the disease progresses, individuals may have the following symptoms:

Some patients with amyotrophic lateral sclerosis may experience involuntary laughter or crying that is unrelated to their emotional state. This symptom is called "pseudobulbar affect" [15]. Some ALS patients may develop painful neuropathy (neurological disease or injury).

5.4 What Is The Life Expectancy of Someone with ALS?

Respiratory failure related to muscle strength decline is the main cause of death of ALS patients. Without assistive techniques such as mechanical ventilation and feeding tubes, the average life expectancy after ALS diagnosis is 3 to 5 years [16] [17]. However, about 4% to 10% of patients can live for 10 years, and some can live for decades, such as the British physicist Stephen Hawking.

Depending on the patient's symptoms, test results and examination results, doctors may require blood and urine samples to be tested to eliminate the possibility of other diseases.

6.3 Check for Other Diseases

No treatment has been found for ALS yet. However, there are some treatments that can help control symptoms, prevent unnecessary complications.

Riluzole-The first drug to treat this disease, is thought to reduce motor neuron damage by reducing the release of glutamate. However, this drug only slightly delays disease progression [18]. Another drug, Edaravone, an intravenous drug used to treat ALS, was first approved for treatment of cerebrovascular accidents in Japan in 2001 and received FDA approval in May 2017. 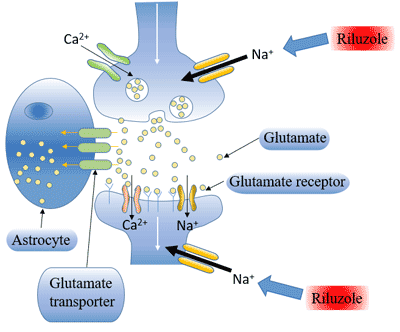 Figure 4 The mechanism of Riluzole

Physical therapy and special equipment can improve individual independence and safety throughout the ALS process.

Mild, low-intensity aerobic exercises, such as walking, swimming, and stationary bicycles, can enhance unaffected muscles, improve cardiovascular health, and help people fight fatigue and depression. Occupational therapists can recommend the use of ramps, harnesses, walkers and wheelchairs to help individuals save energy and stay active.

Nutritional support is an important part of caring for ALS patients. Losing weight can make people with amyotrophic lateral sclerosis worse. When an individual is unable to get enough nutrients from the diet, the doctor may recommend inserting the feeding tube into the stomach.

Respiratory failure associated with decreased muscle strength is the leading cause of death in ALS patients. Therefore, monitoring respiratory status is critical for the treatment of ALS. Pulmonary function tests (PFTs) were used to determine when to start non-invasive ventilation (NIV).

Stem cell transplantation is a potential therapeutic strategy that is not only based on cell replacement, but alters the environment of extracellular motor neurons through nutrition and neuroprotection [19].

Biomarkers are biological measures that help determine the presence or progression of a disease or the effectiveness of therapeutic interventions. Since ALS is difficult to diagnose, biomarkers may help clinicians diagnose ALS sooner and faster. In addition, biomarkers are needed to help predict and accurately measure disease progression.

Potential treatments for ALS are being studied in a range of disease models (fruit flies, zebrafish, and rodents). Inhibition of the expression of a mutated gene is a potential therapeutic approach. The artificial microRNA (miRNA) targeting SOD1 was used to study the silencing of SOD1. The results support that artificial miRNA gene therapy targeting SOD1 is safe and worthy of further development for the treatment of mutant SOD1-related ALS.

For more information on ALS, you can also follow these sites: