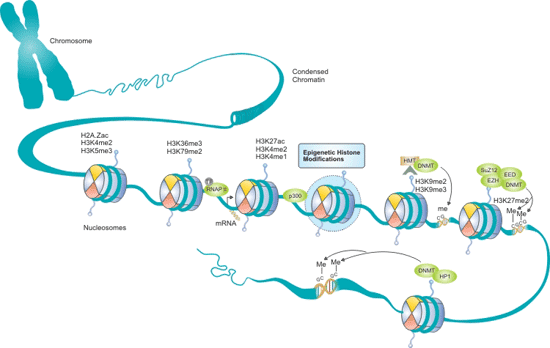 Figure 1. The Interplay between Histone Modifications and DNA Methylation

Generally speaking, based on different function, there are three types of enzymes in the process of histone modification and interacting with histones to affect chromatin structure and transcription, involving writers, readers and erasers. Writers are enzymes that add PTMs, while erasers are enzymes that remove PTMs. Reader proteins bind to the PTMs and function to regulate changes in chromatin structure and gene expression.

This interactive pathway discusses the writers and erasers for histones H2A, H2B and histone H4, as well as the amino acid residues they modify. As the Figure 2 shows, Histone acetyltransferases (HATs) are writers that acetylate lysine residues, including histone H2A Lys5, H2B Lys5, 12, 15, 20, and H4 Lys5, 8, 12, 16. Conversely, the deacytelation of these residues is performed by erasers known as histone deacetylases (HDACs). Acetylation of lysine residues makes chromatin accessible to transcription factors and can significantly increase gene expression.

Then, Histone lysine methyltransferases (KMTs) are writers that add methyl groups to lysine residues, which may be removed by erasers known as histone lysine demethylases (KDMs). Lysines can be either mono-, di-, or tri-methylated, forming functional diversity to each site of methylation. 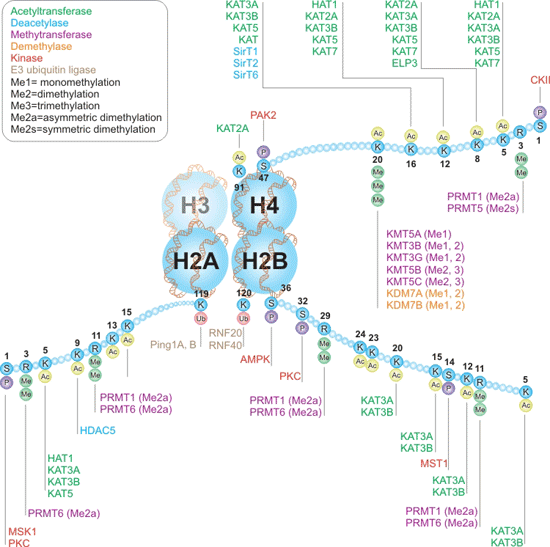 Histone H3 is one of the five main histone proteins involved in the structure of chromatin in eukaryotic cells, and also plays a critical roles in the regulation of chromatin structure and gene expression. Compared with other four types of histones, the modifications of histone H3 just involve acetylation, methylation, and phosphorylation. These PTMs can occur at different residues on histone H3 and regulate various processes involving nuclear organization, chromatin structure, and recruitment of chromatin binding proteins (also called reader proteins), as the Figure 2 shows. 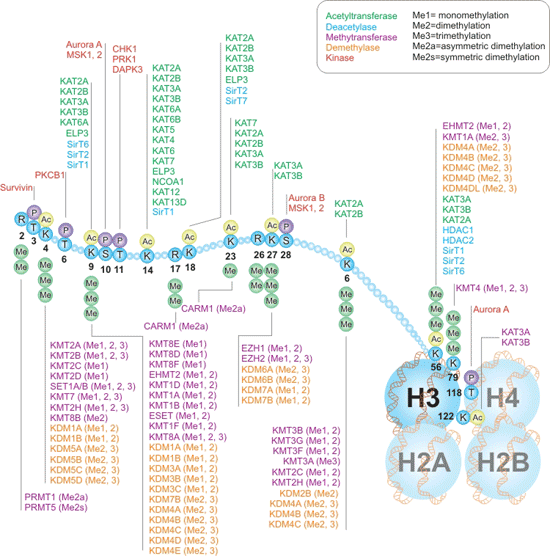