In terms of these characteristics, ESCs have extremely broad application prospects in clinic. But, the primary problem that must be solved is how the embryonic stem cells achieve self-renewal and directed differentiation before applied to the clinic successfully. Since Evans and Kaufman separated mouse ESCs for the first time in 1981, ESCs have been a hotspot in research.

Nanog is a homeobox transcription factor discovered in May 2003. It is a critical factor that contributes to the self-renewal of ESCs. It is thought to play a key role in the maintenance of pluripotency of ESCs. The expression of Nanog in undifferentiated ESCs is higher than in differentiated ESCs. It plays a very important role in maintaining the versatility of early embryonic embryonic embryos and preventing their differentiation into endoderm. Over the past decade, many research advances have been made in Nanog structure, function, mechanism, and related diseases.

1. What is The Structure of Nanog?

2. What is The Function of Nanog?

3. The Mechanism of Nanog

1. What is The Structure of Nanog?

At present, most of the Nanog genes are studied in mouse and human Nanog genes. Here we focus on the Nanog gene in human. Human Nanog gene, also known as Nanog1 (Gene ID: 13376297), is localized on chromosome 12 and consists of 4 exons and 3 introns with a 915 bp open reading frame (ORF) (Fig. 1) [1]. It is very unique that Nanog1 gene has been tandem duplicated into a variant gene Nanog2 (NanogP1), as well as many pseudogenes (NanogP2-P11) during evolution [2] [3]. The comparison of human and chimpanzee genome sequences has revealed that Nanog2 retained its intronic sequences, while NanogP2 to P11 are dispersed, intronless and reversely transcribed integrant [4]. 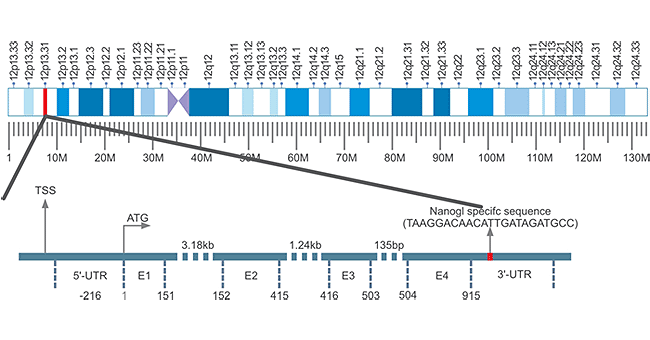 Figure 1. The Structure of Nanog Gene

The H domain contains 60 amino acid residues that interact with proteins (such as Oct4) and bind to DNA; the ND domain has 95 serine- and threon-rich residues, and acidic residues are found in trans-activators. The C-terminal domain is composed of 150 amino acid residues with no obvious transcriptional activation motif, and this domain includes two subdomains (CD1 and CD2 are responsible for transactivation) and a tryptophan-rich domain (WRD) is involved in dimerization. [5].

Figure 2. The Structure of Nanog Protein

2. What is The Function of Nanog?

Therefore, in-depth study of the expression of Nanog in adult tissues is conducive to understanding the molecular biological characteristics of adult stem cells and their mechanisms of division and differentiation.

As mentioned before, Nanog is a new gene that was officially identified and named in 2003. It plays an important role in the regulation of cell fate in the inner cell mass during embryonic development. It maintains the pluripotency of the ectoderm and prevents its differentiation like primitive endoderm.

In addition to maintaining the self-renewal and pluripotency of ESCs, Nanog can also regulate the cell cycle of ESCs. Related reports indicate that ESCs clones with overexpressed Nanog accelerate S phase entry [9]. In addition, another function of Nanog plays an important role in the development of tumors and can be used as a diagnostic marker for tumors. These two functions will be elaborated in the mechanism of action by the relationship with ESCs and cancer stem cells (ESCs), respectively.

3. The Mechanism of Nanog

NANOG is critical in stem cell self-renewal and pluripotency maintenance and tumorigenesis. Here, we describe these two mechanisms from the role of NANOG in stem cells and cancer stem cells and the associated interaction proteins.

3.1 The Mechanism of Nanog in ESCs

The Nanog proximal promoter containing the Oct4/Sox2 motif drives the reporter gene to recapitulate appropriate Nanog expression in pluripotent and non-pluripotent cells, and this motif is highly conserved between mouse, rat and human. Although high expression of Nanog is beneficial for self-renewal of ESCs, overexpression of Oct4 induces differentiation.

FoxD3, also known as a forkhead family transcription factor, is highly expressed in mouse ESCs and pluripotent cells of early embryos [12]. It has been reported that FoxD3 can activate the Nanog promoter via an ES cell-specific enhancer localized at -270 upstream of the transcription start site [13]. Initially, FoxD3 was called a transcriptional repressor, but it still activates Nanog transcription, suggesting that the genetic environment can determine FoxD3 regulation. 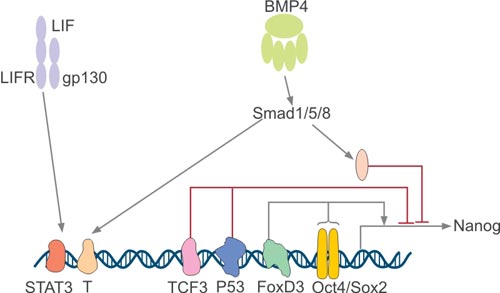 3.2 The Mechanism of Nanog in tumor

Since the first discovery of cancer stem cells (CSCs) in acute myeloid leukemia, our understanding of cancer has been fundamentally changed [16]. CSCs refer to cancer cells with stem cell properties, including "self-replication" and "multi-cell differentiation." Usually such cells are thought to have the potential to form tumors and develop into cancer, especially as the cancer is transferred out, producing an origin of new cancers.

A large amount of studies have confirmed that NanogP8, a Nanog1 homolog in tumor cells, plays a key role in regulating CSC properties. Overexpression of NANOG in tumor cells can affect some important cancer phenotypes through related signaling pathways, including cell proliferation, cell migration and invasion, chemo-resistance, and hypoxic stress.

As shown in Figure 4, NANOG can be activated by multiple stimuli in malignant tumors. Hypoxic activates NANOG through the actions of HIF-1α or HIF-2α signaling pathways [17]. STAT3, as a downstream target of NANOG, plays an important role in NANOG-mediated immune evasion, epithelial mesenchymal transition and chemo-resistance. Moreover, NANOG is also able to regulate resistance to CTL-mediated lysis and Treg cells recruitment by activating Akt and TGF-β1 [18]. In addition, NANOG regulates chemo-resistance by upregulating MDR-1, IGF2BP3, and YAP1 [19]. NANOG can also affect multiple cell cycle regulators, of which cyclin D1 has been shown to be directly regulated by NANOG [20].

As mentioned earlier, Nanog is not only a key factor in maintaining ESCs self-proliferation, but also has a simple relationship with tumors. Because CSCs, like ESCs, have the ability to self-proliferate and have multiple identical signaling pathways. Based on these features, the researchers speculate that in-depth study of the regulation mechanism of Nanog gene expression will help to explore new ways to control and treat cancer [21].

At present, a number of studies have confirmed that Nanog has different expression levels in various epithelial-derived tumor cells. In vitro experiments of cultured tumor cells, the expression of Nanog in tumors is higher than normal tissues. Nanog is specifically expressed in embryonal tumor cells, teratoma tissue, testicular carcinoma in situ, and seminoma, whereas no Nanog expression is found in normal testes [22].

In addition, silencing the Nanog gene can retard cell cycle, inhibit tumor development and induce tumor cell differentiation [24]. These results fully demonstrate that the expression of Nanog gene is closely related to the state of tumor differentiation, and plays an important role in promoting the development of tumor cells and anti-apoptosis, and can be used as a promising marker for cell pluripotency and tumor diagnosis.