Effects of FSHR on Fertility and Tumors

As a member of the glycoprotein subfamily of the G protein-coupled receptor superfamily, FSHR participates in signal transduction by binding to ligands. Follicle stimulating hormone (FSH) is a glycoprotein hormone secreted by the pituitary gland. FSH can stimulate the development of follicles in female ovaries and promote spermatogenesis in male testes by binding to FSHR.

3. The Tissue Distribution of FSHR

7. Relationship between FSHR and Tumor

FSHR belongs to the glycoprotein subfamily of the G protein-coupled receptor superfamily [1], which consists of 678 amino acid residues with a molecular mass of approximately 76.5 kD. FSHR is a membrane receptor composed of four oligosaccharide protein monomers linked by disulfide bonds. The interaction between FSH and FSHR depends not only on membrane phospholipids, but also on the combination of disulfide bonds. FSHR can be divided into three parts: extracellular domain, intracellular domain and transmembrane domain. 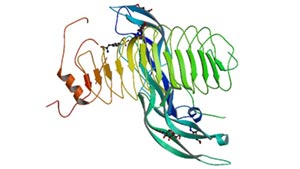 The FSHR transmembrane domain is a transmembrane protein complex composed of 7 lipophilic helices inserted into the cell membrane. The main function of the transmembrane domain is to participate in signal transduction mediated by protein kinase A (PKA) and initiate intracellular events after receptor activation. The intramolecular disulfide bond stabilizes the protein conformation. The highly conserved aspartic-arginine-tyrosine (Asp-Arg-Tyr) triad motifs play an important role in hormone-receptor interactions. 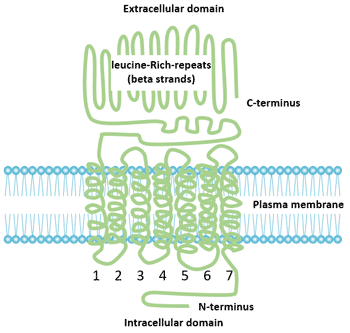 In 1989, the inferred FSHR DNA fragment sequence was first reported. In 1990, the cDNA of follicle stimulating hormone receptor (FSHR) was cloned for the first time. The human FSHR gene is located in the short arm 2 region of chromosome 2 and is a single copy gene of 54 kb in length. Sheep and pigs are located on chromosome 3. The human FSHR gene contains 10 exons and 9 introns and a promoter region [2]. The extracellular domain is encoded by nine exons; the C-terminus, transmembrane domain, and intracellular domain of the extracellular domain are all encoded by exon 10.

3. The Tissue Distribution of FSHR

Interestingly, FSHR has recently been found to be selectively expressed on the surface of many tumor blood vessels, and it has been found that FSHR expression is closely related to tumor metastasis in primary renal cell carcinoma. The expression levels of FSHR are also different at different stages of female follicular development.

The signaling process of the FSHR consists of four steps:

Obstacles in any of the above steps will affect the physiological role of hormones. Single nucleotide polymorphisms at 307 and 680 of exon 10 are the most common in FSHR [8]. It is manifested as 307 site threonine (Thr) can be substituted by alanine (Ala) or 680 site serine (Ser) can be substituted by aspartic acid (Asn). Thr307Ala is located in the FSHR extracellular hinge region, connecting the hormone binding domain with the transmembrane domain. The mutation can affect hormone transport and signal transduction.Asn680Ser is located in the intracellular domain, which can affect the decoupling of adenylate cyclase [9].

Sequence polymorphisms and epigenetic polymorphisms of FSHR promoters may affect the sensitivity of cells to FSH by regulating the transcriptional activity of FSHR.

The FSHR1 variant is the full-length form of FSHR. It is a typical phenotype of G protein coupled receptors. The structure of FSHR1 typically includes a large extracellular N-terminal domain that binds to FSH and an intracellular C-terminal domain segment, 7 α-helical membranes are alternately connected by extracellular and intracellular circulation. FSHR1 is expressed only in ovarian granulosa cells and its primary function is to participate in follicular development and granulosa cell differentiation [11].

Unlike FSHR1, FSHR2 retains the extracellular and transmembrane domains of the receptor, but not the intracellular domain. This variation retains the high affinity binding of FSHR to FSH, but lacks the ability to activate G protein when bound to FSH [2].

FSHR3 subtype has a single transmembrane domain, and the overall topology of FSHR3 is consistent with that of the growth factor I receptor. FSHR3 promotes growth by activating MAPK and Ca2+-dependent channels [12]. FSHR3 may play an important role in promoting mitotic activity and cell growth.

FSHR4 lacks any transmembrane domain and is called soluble FSHR. FSHR4 stabilizes or blocks the binding of hormones to FSHR by binding to FSH in the extracellular matrix. FSHR4 may function like the insulin-like growth factor (IGF)-1 binding protein [13]. But its exact function is unclear.

FSHR is a FSH receptor specifically expressed on the surface of testicular Sertoli cells and plays an important role in the development of adult male sperm. In males, FSH binds to the follicle-stimulating hormone receptor (FSHR) on the Sertoli cell membrane, activates the signal pathways such as cAMP-PKA, MAPK, calcium channel, and PI3K/PKB, and converts the signal from FSH into various factor signals required by spermatogenic cells, supporting the spermatogenesis process [14].

Ovarian function begins to decline after a woman reaches her baby peak at age 25. With the increase of age, the aging speed of ovary is also accelerated [17] [18]. Of course, there are limitations in evaluating ovarian reserve function solely by age. In addition to age, the patient's ovarian reactivity should also be considered.

In females, FSHR gene mutation can cause the regulation disorder of the hypothalamic-pituitary-ovarian axis, which directly affects the growth and ovulation of follicles.

The FSHR gene may also be associated with polycystic ovary syndrome (PCOS).

Ovarian cancer is one of the most common malignant tumors in the female reproductive system, with high mortality, high recurrence rate, and high metastasis rate. FSHR may be associated with the development of ovarian cancer in two ways: structural polymorphism of the receptor itself; differential expression in normal tissues and cancerous tissues.

7. Relationship between FSHR and Tumor

In addition to its role in reproductive system tumors such as ovarian cancer and prostate cancer, the role of FSHR in other tumors has also been reported in recent years. Expression of FSHR is found in various tumor tissues such as human breast, colon, pancreas, bladder, kidney, lung, liver, stomach, testis and ovary [19].

FSHR was positive in prostate, bladder and kidney cancer. FSHR may play an irreplaceable role in the occurrence, development and metastasis of prostate cancer, and is an ideal target vector for prostate cancer.

FSHR can stimulate the proliferation of ovarian tumor cells, improve the ability of tumor invasion, and promote tumor growth [20]. The expression level of FSHR was positively correlated with the differentiation degree of ovarian tumors [21].

FSHR expression can be seen on vascular endothelial cells of colon cancer and gastric cancer. This is consistent with the idea that invasive tumor cells infiltrate the surrounding blood vessels and develop into tumors.

FSHR is widely expressed in tumor vascular endothelial cells and may play an important role in tumor angiogenesis. FSHR can effectively distinguish tumor tissue from normal tissue, indicating its potential therapeutic value as a tumor imaging agent and targeting tumor neovascularization. Therefore, the development of inhibitors against FSHR targets can block tumor angiogenesis independent of VEGF and exert anti-tumor effects.

FSHR is highly expressed in the endothelium of many other tumors and plays an important role in the progression of the disease. Therefore, FSHR is a potential target for tumor diagnosis and treatment. Currently, the main targeted drugs are as follows:

Compounds targeting FSHR: FSH is a gonadotropin secreted by the pituitary gland and a glycoprotein composed of two peptide chains, α and β. The β peptide chain is responsible for binding to FSHR, producing a range of biological functions [22]. FSHβ33-53, FSHβ81-95 and FSHβ85-95 can be combined with FSHR and can be used as a targeting vector for tumors for diagnosis and treatment [23].