Information You Must Know about KCNN4

9. Application of KCa3.1 Channel in Treatment

IbTX is the most commonly used BKCa channel blocker. In addition, this channel can also be blocked by charybdotoxin (CTX), tetraethylammonium (TEA), d-tubocurarine and extracellular alkalinization.

Studies have shown that mitoBKCa plays an important role in a variety of physiological and pathological activities such as apoptosis. 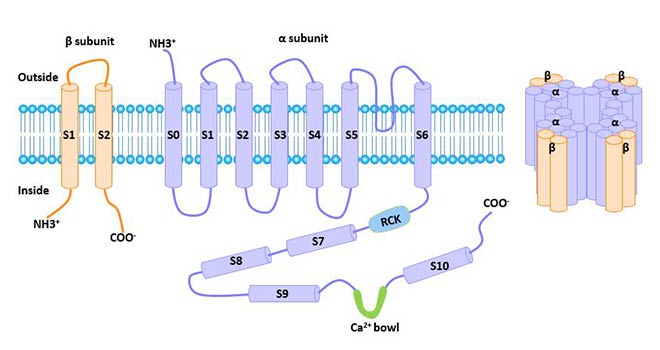 SKCa is mainly expressed in the central system and is also expressed in skeletal muscle cells and human Jurkat-T cells. The gene was isolated from mammalian brain tissue in 1996 and mainly includes SK1, SK2, and SK3.

IKCa can be blocked by CTX, clotrimazole (CLT), TRAM-34, and is not sensitive to apamin.

The KCNN gene product is a peptide chain containing 428 amino acids, and the N-terminal and C-terminal of the peptide chain are located in the inner membrane.

The C-terminus is linked to calmodulin, which is a Ca2+ sensor that senses intracellular Ca2+concentration and regulates it [2]. The KCNN gene product contains 6 alpha helical hydrophobic transmembrane S1-S6. There is an inner hydrophobic sequence between S5 and S6 to form the pore region of permeable ions. Pore region is related to the selectivity of K+.

A functional IKCa channel protein is a homotetramer composed of the above peptide chains [3]. 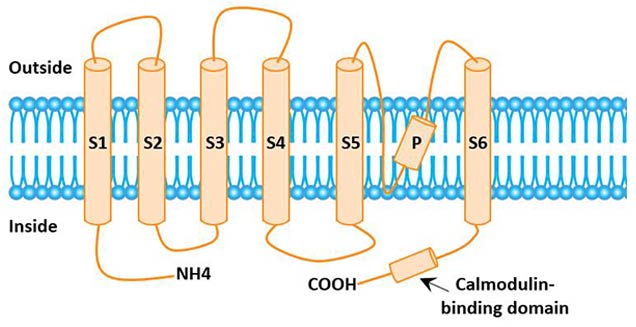 Figure 2 The structural model of IKCa

IKCa is a non-voltage-dependent channel and highly sensitive to calcium concentration changes in cytoplasmic, such as growth factor-mediated calcium increase. It is activated by the combination of intracellular Ca2+ and calmodulin [4]. The perception of calcium by IKCa is regulated by calmodulin.

IKCa plays an important role in regulating cell membrane potential and gene expression. The main physiological roles of the KCa3.1 channel are:

In addition, studies have shown that KCNN4 also plays an important role in cell cycle regulation [7].

In addition, an increase in intracellular H+ concentration can reduce the activity of the IKCa channel without affecting its single channel conductance and inward rectification characteristics. The inhibitory effect of H+ did not disappear with the increase of intracellular calcium concentration [9]. 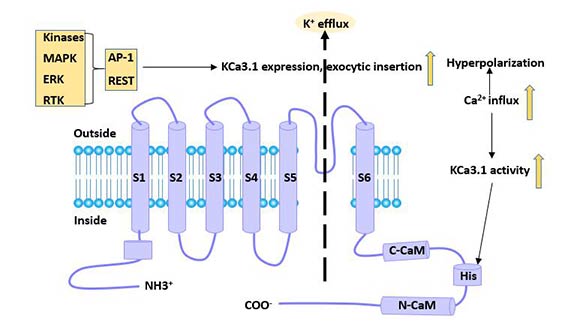 KCa3.1 is expressed in a variety of cells involved in arteriovenous thrombosis, and regulates cell activation, migration and adhesion by regulating Ca2+ influx and membrane potential levels, thereby participating in the occurrence and development of thrombotic diseases.

Under normal conditions, VSMC is contractile phenotype, and the expression of KCa3.1 channel is not detected at this time [11]. When the blood vessel is damaged, the VSMC phenotype is converted and the KCa3.1 channel is expressed.

The mechanism of VSMC proliferation may be: The opening of the KCa3.1 ion channel causes K+ to flow out, causing hyperpolarization of the cell membrane. This leads to an increase in the electrochemical driving force of Ca2+ influx and an increase in intracellular Ca2+ levels, thereby regulating gene expression, protein kinase activation and cell division processes [12] [13]. As an important factor to control vascular smooth muscle hyperplasia, KCa3.1 channel plays a role in the occurrence and development of arterial thrombotic diseases mainly by promoting VSMC proliferation.

Studies have shown that IKCa can promote the occurrence and progress of ankylosing spondylitis (AS). Inhibition of T cell activation may inhibit the progress of AS. Therefore, IKCa channels can also be used as targets for AS treatment. CLT and TRAM-34 may become anti-AS drugs.

Macrophages are involved in the formation of atherosclerotic plaques. It produces inflammatory factors and oxygen free radicals that promote the progression of plaque [14]. The realization of its function depends mainly on the extent and duration of intracellular Ca2+ increase.

The activation of KCa3.1 channel can promote the Ca2+ influx of macrophages and the hyperpolarization of the cell membrane, thereby regulating the chemotaxis and phagocytosis of macrophages, as well as the production of inflammatory factors and oxygen free radicals. Blocking the KCa3.1 ion channel, the chemotaxis of monocytes/macrophages was significantly reduced.

In addition, cells such as endothelial cells, B lymphocytes, fibroblasts, and platelets are also involved in arteriovenous thrombosis. The activation of KCa3.1 channel is closely related to many functions such as activation and migration of these cells.

Liver cancer is a common malignancy of digestive system. It is caused by the unrestricted proliferation and decreased apoptosis of liver cancer cells. Studies have shown that KCNN4 channels regulate cell cycle progression and cell growth of human cancer cells. The proliferation and apoptosis of hepatocellular carcinoma cells are closely related to calcium-activated potassium channels.

Studies have shown that the abnormal expression of calcium-activated potassium channels in hepatocarcinoma may cause tumor cell apoptosis and imbalance of proliferation, formation of tumor blood vessels, cell metastasis and invasion, and have an indirect or direct effect on the progression of liver cancer.

9. Application of KCa3.1 Channel in Treatment

KCa3.1 channel is involved in erythrocyte volume regulation, lymphocyte activation, macrophage migration, vascular smooth muscle cell and fibroblast proliferation and other processes through regulating cell membrane potential and calcium signal, and plays a role in the occurrence and development of various diseases.

Blocking the KCa3.1 channel has a total effect on the treatment of the disease.

Wulff et al. [20] developed the KCa3.1 channel blocker TRAM-34 in 2000, which has strong blocking effect and no obvious adverse liver reaction. It is widely used in animal and cell experiments.

The advantage of TRAM-34 is that it is highly selective. For example, the blocking effect on KCa3.1 channels is more than 1000 times that of other potassium channels, sodium channels and calcium channels; TRAM-34 does not reduce the cell activity of human T lymphocytes, VSMC, macrophages and endothelial cells [21].