Growth factor, which generally considered as a series of cytokines, is a naturally occurring substance that stimulates cell growth, differentiation, survival, inflammation, and tissue repair. Usually it is a protein or a steroid hormone. Growth factors are important to regulate a variety of cellular processes, which can be secreted by neighboring cells, distant tissues and glands, or even tumor cells themselves. Normal cells show a demand for several growth factors to maintain proliferation and viability. Growth factors can exert their stimulation though endocrine, paracrine or autocrine mechanisms.

Individual growth factor proteins tend to occur as members of larger families of structurally and evolutionarily related proteins. There are many families, some of which are listed on the table below. Additionally, CUSABIO almost owns all of interleukins and receptors, and all of them have biologic activity and high purity. Here, we numerate several pictures of hot growth factors. 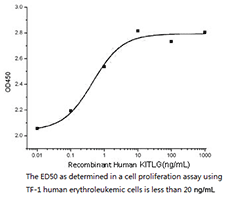 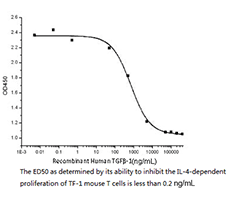 FGFs bind heparan sulfate glycosaminoglycans (HSGAGs), which facilitates dimerization (activation) of FGF receptors (FGFRs). The latest data indicates that FGF family includes 22 members in humans from FGF-1 to FGF-23 except for FGF-15 which exists in the mouse. All FGFs except for four members (FGF11-FGF14) bind to FGF Receptors. Because FGF11-FGF14, also known as fibroblast growth factor-homologous factors or FHF1-FHF4, share significant sequence and structural homology with FGFs, and the manner of binding HS is similar to the FGFs.

TGFα is up-regulated in some human cancers and acts through the EGF receptor. It is produced in macrophages, keratinocytes and brain cells, and induces epithelial development. TGFα is also thought to be involved in the pathogenesis process of hepatocarcinogenesis. TGFβ acts through the TGFβ receptor (TGFβR) and exists in three known isoforms in humans, TGFβ1, TGFβ2, and TGFβ3, which are upregulated in colorectal adenomas and cancer, and directly associated with more advanced tumor characteristics.

All members of the VEGF family stimulate cellular responses by binding to tyrosine kinase receptors (the VEGFRs) on the cell surface, causing them to be dimer and become activated through transphosphorylation. The VEGFRs have an extracellular portion, which is consist of 7 immunoglobulin-like domains, a single transmembrane spanning region and an intracellular portion containing a split tyrosine-kinase domain. There are three main subtypes of VEGFR, numbered 1, 2 and 3, also known as Flt-1, KDR/Flk-1 and Flt-4, respectively. If you want to know more things about growth factor, you can click here to view details.