In April 2022, the American Association for Cancer Research (AACR) annual meeting announced phase 1b/2 clinical data (NCT04815720) for Pepinemab, the first SEMA4D-targeted antibody for the treatment of recurrent or metastatic head and neck squamous cell cancer. It suggested that the improved tolerability was observed in patients. Going forward, the expansion phase II is currently enrolling patients, which will hopefully identify the potential of the SEMA4D as a first-line treatment for cancer patients. Remarkably, previous clinical data also demonstrate that Pepinemab, in combination with avelumab (Bavencio), exhibited the well effective in the treatment of patients with advanced non-small cell lung cancer (NSCLC). SEMA4D, as a newly discovered immunoregulator, ample research has indicated that SEMA4D is involved in the tumor regulatory process and closely related to drug resistance mechanism. So today we're going to cover more SEMA4D knowledge that you might interest.

Semaphorin 4D (SEMA4D, also known as CD100) is an important member of the Semaphorins family. SEMA4D is a 150 kDa transmembrane homodimeric protein [2]. The protein structure of SEMA4D mainly consists of the SEMA domain, the cysteine-rich domain (CRD) and the immunoglobulin (Ig)-like domain (Figure 1) [3]. The members of SEMA family all share a common SEMA domain, which is important for signal transduction and also plays a role in the determination of the receptor binding specificity. The Ig-like domain exists between the CRD domain and the cell membrane (M). The CRD domain could bind directly to the cell membrane, which contributes to the membrane-bound forms of SEMA4D. Besides, SEMA4D is expressed on the cell surface as a homodimer. Upon cell activation, SEMA4D can be released from the cell surface via proteolytic cleavage to generate soluble forms of SEMA4D [4]. 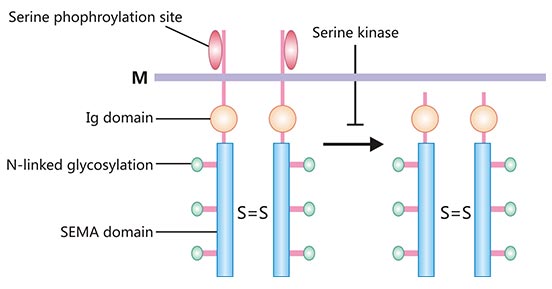 SEMA4D is widely expressed in a variety of human tissues and organs, both in embryonic and adult tissues, including lymphoid tissues (spleen, thymus and lymph nodes) and non-lymphoid tissues (heart, brain, kidney) [4, 5]. SEMA4D has versatile roles in axonal guidance, activation of T and B cells, and immune regulation [6]. In recent years, numerous studies have found that SEMA4D is highly expressed in many human tumor tissues and plays an important role in immune system, angiogenesis, and tumor invasion and metastasis [7].

Currently, SEMA4D has three main receptors, Plexin-B1, Plexin-B2, and CD72 [8]..Plexin-B1 is an important member of the Plexins family of transmembrane proteins, originally identified from mouse kidney-derived cells [9]. Plexin-B1 is considered as a high-affinity receptor for SEMA4D.

Plexin-B1, with a molecular weight of approximately 300 kDa, is expressed in a variety of tissues including fetal kidney, digestive system (from esophagus to colon), thyroid, prostate and trachea [9]. SEMA4D binds to Plexin-B1, which results in the stimulation of Met tyrosine kinase activity (Figure 2). The SEMA4D/Plexin-B1 interacts with Met form a complex that activates downstream signaling pathways involved in biologic activities such as angiogenesis, cell invasion, and cell migration [10].

In addition to the high-affinity receptor Plexin-B1, SEMA4D binds to the low-affinity receptors CD72 and Plexin-B2. CD72 is a type II transmembrane protein with a molecular weight of 45 kDa, which belongs to the C-type lectin superfamily [11]. CD72 is mainly expressed in immune cells, such as B cells, APCs, and mast cells [12]. In human mast cells, the SEMA4D/CD72 complex inhibits cell proliferation, chemokine, and cytokine production [6, 13]. Also, Plexin-B2 belongs to the Plexins family of transmembrane proteins, which has a molecular weight of 240 kDa and is expressed in various tissues [14]. Numerous studies have found that SEMA4D binding to Plexin-B2 participates in immune response, nerve growth, thrombosis formation, bone growth and tumor angiogenesis [6].

Recent studies have focused on the SEMA4D/Plexin-B1. As shown in Figure 3, SEMA4D binding to the Plexin-B1 activates ERBB2, Met or RON tyrosine kinases signaling pathway, which induces phosphorylation of downstream signaling molecules such as Gab1 and Shc (Figure 3) [16]. Activation of ERBB2, Met or RON is required for SEMA4D/Plexin-B1-mediated cell proliferation, migration and invasion [17, 18]. In tumor cells, angiogenesis is a critical factor in the development of tumors and metastases. Binding of SEMA4D to Plexin-B1 drives a series of cascade reactions that mediate tumor angiogenesis, but the precise activation process remains to be explored. 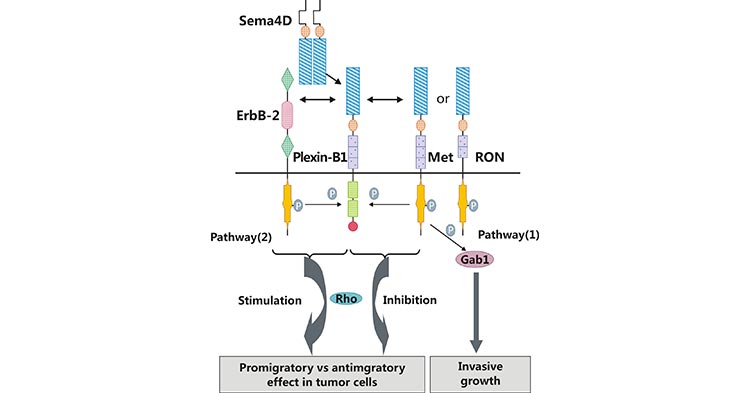 It has been suggested that SEMA4D binding to Plexin-B1, promotes angiogenesis through the Rho signaling pathway (Figure 3) [16]. It has also been suggested that the pro-angiogenic effect of SEM4D is achieved through Met activation followed by tyrosine phosphorylation [19]. In a nutshell, SEMA4D is involved in the activation of different signal transduction pathways, which influences cell proliferation and migration to exert biological functions.

SEMA4D, a membrane-bound and secreted protein with immune specificity, plays a crucial role in oligodendrocyte precursors migration, central nervous system (CNS) inflammation, and neurodegeneration. Abnormal expression of SEMA4D or SEMA4D/Plexin-B1 may cause CNS-related diseases such as neuroinflammatory demyelinating disease [4] and multiple sclerosis [20].

In addition to the nervous system, SEMA4D expression in the renal tubules could regulate renal immune mechanisms. Using an experimental immune complex (IC) glomerulonephritis model, high expressed SEMA4D was found to enhance the response of T and B cells, causing glomerular injury and leading to glomerulonephritis. The receptor for SEMA4D, Plexin-B1, is expressed in both tubules and glomeruli. It was found that the SEMA4D/Plexin-B1 complex may be an inducer of renal macrophage recruitment, serving as a key factor for the development of nephritis [21].

In head and neck squamous cell carcinoma, high expression of SEMA4D/Plexin-B1 induced migration of endothelial cells and promoted angiogenesis, mediating metastasis; knockdown of SEMA4D expression significantly inhibited the growth or metastasis of cancer cells [23]. In addition, using a breast cancer tumorigenesis model, it was found that downregulation of SEMA4D in the tumor microenvironment restrained microangiogenic capacity and metastatic ability [26].

SEMA4D has also been studied in prostate cancer, colon cancer, B-cell type non-Hodgkin's lymphoma and neurotropic malignancies [30-32]. Therefore, further research on the mechanism of SEMA4D in various tumors will be important for tumor pathogenesis, treatment, and prevention.

There is growing evidence that SEMA4D plays an important role in the nervous system, immune regulation, angiogenesis, and tumor invasion and metastasis. The latest data from Pharmacodia company show that there is one SEMA4D-targeted clinical drug, Pepinemab. Pepinemab is a humanized monoclonal antibody that targets and blocks the signaling activity of SEMA4D to overcome the resistance mechanisms of immune rejection and myelosuppression, with indications for head and neck squamous cell carcinoma, non-small cell lung cancer, Alzheimer's disease, and multiple sclerosis. Clinical data suggested that the SEMA4D antibody Pepinemab has made significant progress in the treatment of advanced non-small cell lung cancer with well-tolerated and potent antitumor activity [1].

More importantly, many studies has demonstrated that SEMA4D is a crucial molecule involved in immune-related diseases. In recent years, early treatment and early benefit of immunotherapy has been generally accepted clinically. However, drug resistance to immunotherapy tends to limit patient outcomes. Therefore, drug-resistant treatments have gradually become an important research direction for immunotherapy. In addition, it has been suggested that SEMA4D antibodies in combination with immune checkpoint inhibitors (such as anti-CTLA-4, anti-LAG3, anti-PD-L1, and anti-TGFβ) enhance T-cell infiltration and activation, which leads to durable tumor regression when administered in preclinical animal models [33-35].

SEMA4D as a new immunomodulatory molecule, high expression of SEMA4D indicates high malignancy of tumor cells. Previous studies indicate that the up-regulated SEMA4D expression promotes angiogenesis. Thus, SEMA4D is expected to be a target for anti-tumor therapy. At present, only Pepinemab is under clinical research, but the potential is huge. We expect that SEMA4D-targeted drugs will be developed in the near future.

To fully serve the pharmaceutical companies in SEMA4D based drug research for different tumors or autoimmune diseases. CUSABIO has launched the multiple SEMA4D active protein products (CSB-MP835707HUd9；CSB-MP3947MOW；CSB-MP020990MO；CSB-MP835707HU) to help you explore the mechanism of SEMA4D or its potential clinical value.

[18] Kuklina, Elena. "Semaphorin 4D as a guidance molecule in the immune system." International Reviews of Immunology (2021): 1-6.