Oct4 -- The Gatekeeper of Pluripotency of Embryonic Stem Cells

Oct4 (octamer-binding transcription factor) is named for its ability to bind to the DNA of the Octamer motif. It is also known as Oct3, POU5F1, Oct-3/4, Otf3 or NF-A3. It is encoded by the POU5F1 gene and belongs to POU transcription factor family, class-5 subfamily. Oct4 is the gatekeeper of pluripotency of embryonic stem cells and plays an extremely important role in maintaining pluripotency and self-renewal of embryonic stem cells. Oct4 is also necessary for the production of induced pluripotent stem cells. In addition, Oct4 is highly expressed in a variety of tumors, suggesting that Oct4 may be involved in the occurrence and development of malignant tumors.

3. Regulation of The Oct4 Gene

Oct4 is expressed in the developing brain, with high levels of expression in specific cell layers in the cortex, olfactory bulb, hippocampus and cerebellum. In addition, Oct4 is mainly expressed in embryonic stem cells, embryonic germ cells and embryonic/germ cell tumors. Although Oct4 is low expressed in adult tissues, it is widely expressed in various adult stem cells, mainly including:

In humans, Oct4 mRNA is expressed at various stages of embryonic development from unfertilized oocytes to uncompacted morula [2].

Oct4 is encoded by the Pou5fl gene and located on the human chromosome 6p21.3. Oct4 is a member of the POU family of transcription factors. It has multiple transcription initiation sites, which can be transcribed into different mRNA isoforms and thus translated into a variety of proteins.

Oct4B consists of 265 amino acids and is expressed in the cytoplasm of a variety of non-pluripotent cells, such as terminally differentiated peripheral blood monocytes and bladder tumor cells.

OctB1 is mainly expressed in human ESC and embryonal carcinoma cell (ECC), and its expression is rapidly down-regulated as cells differentiate.

OctB1 has the same amino terminal and partial POU binding regions as Oct4B, and the remaining amino acid sequences are different. Oct4B1 enhances the anti-apoptotic potential of cells and regulates the pluripotent state of cells. In addition, Oct4B1 is involved in the progression of tumors. 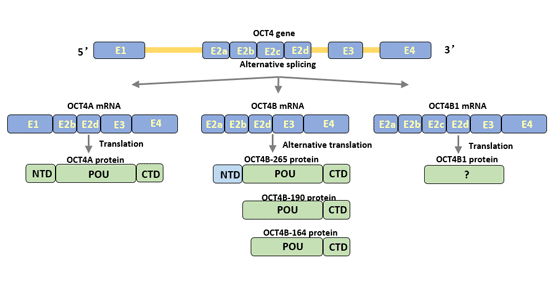 2.2 Structure of The Oct4 Gene

Oct4 Isoform 1 is one of the major subtypes of transcription, with 5 exons and 4 introns. The protein encoded by this gene contains 324 amino acids, with a length of about 16.40 kb and a relative molecular weight of 18 kD.

N-terminal region: This region is a transcriptional activation region, rich in proline, has the function of binding to DNA and activating transcription, helping to stabilize biomolecular structure, reduce cell acidity and regulate cell redox potential.

At present, six Oct4 pseudogenes have been found, which are Oct4pg1, Oct4pg2, Oct4pg3, Oct4pg4, Oct4pg5, and Oct4pg6. These pseudogenes are highly homologous to Oct4 mRNA but do not function as Oct4. The presence of the Oct4 pseudogene can cause false positives in the experimental results, which brings some troubles to the study of tumor and stem cell Oct4.

3. Regulation of The Oct4 Gene

The upstream regulatory elements of Oct4 include a proximal enhancer (PE) and a distal enhancer (DE) that function differently at different stages of development.

For example, proximal enhancers act on ectodermal stem cells, and distal enhancers act on inner cell mass, primordial germ cells, and embryonic stem cells [7]. Many factors regulate the expression of Oct4 by acting on these two regulatory elements. For example, the orphan nuclear receptor superfamily factor can bind to PE and affect the expression of Oct4.

In addition, some substances, such as the Paf1 complex, can directly interact with the Oct4 promoter and participate in the activation of Oct4 expression. As the Oct4 activator, it plays an important role in maintaining the transcriptional activation of embryonic stem cells Oct4.

Oct4 protein activity is mainly regulated by phosphorylation or sulfonylation in mammals.

For example, phosphorylation of the highly conserved residues Ser 229 (mouse) or Ser 236 (human) in the POU-binding domain of Oct4 protein by protein kinase A and/or ERK MAPK can be spatially impeded DNA binding and homodimer assembly [8].

Oct4 regulates the expression of target genes by combining with ATGCAAAT in promoter or enhancer regions [11] [12]. These target genes mainly include YES1, FGF4, UTF1, ZFP206 and other genes related to the control of mammalian embryo development. By regulating its downstream target genes, it participates in normal development, especially in early embryonic development. In addition, Oct4 expression is related to pluripotency of stem cells. 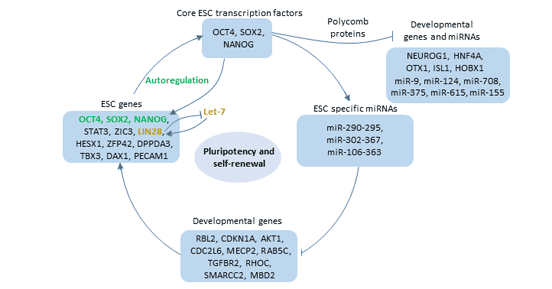 Figure 3 The function of the Oct4

Embryonic stem cells (ESCs) are a class of cells with self-renewal ability and multi-directional differentiation potential, which can differentiate into various types of tissue cells of the body. Oct4 is an important transcription factor in ESC and plays a pivotal role in maintaining ESC pluripotency and self-renewal capacity.

On the one hand, they activate the transcription of genes involved in maintaining ES cell self-renewal. For example, Dppa4, Tdgf1, Oct4, Nanog, and Lefty2 are all positively regulated by Oct4, Sox2, and Nanog, and are preferentially expressed in ES cells.

On the other hand, Oct4, Sox2 and Nanog jointly occupy promoters of genes related to differentiation and development and promote their inactivation [14].

It was found that embryos lacking Oct4 developed only to the blastocyst stage, and the cells in the inner cell mass are not pluripotent and can only differentiate into trophoblast cells. And the blastocyst died at the time of implantation [15].

In adult stem cells, the regulatory mechanism by which Oct4 maintains pluripotency is similar to that of ESC.

Oct4's ability to prevent or at least delay aging could have major implications for aging research. Oct4 is important in the development of all organisms and remains active throughout the life of a cell. It protects atherosclerotic plaques in blood vessels, which are the underlying cause of heart disease and stroke.

Among them, Oct4 is considered to be an indispensable core transcription factor in reprogramming. Oct4 regulates cellular state transitions such as the establishment of pluripotency and differentiation of the embryonic germline. 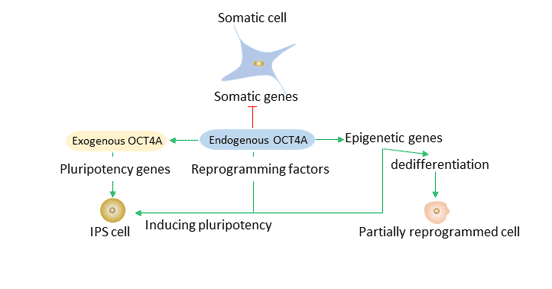 Figure 4 The role of Oct4 in reprogramming

Oct4 is highly expressed in both embryonic germ cell tumors and adult cell tumors, suggesting that Oct4 may be involved in the occurrence and development of malignant tumors.

Nanog and Oct4 are highly expressed in breast cancer tissues [16]. Oct4 expression is related to the degree of differentiation of prostate cancer [17]. Strong expression of Nanog, Oct4, and CD133 in oral squamous cell carcinoma is associated with poor clinical prognosis. Oct4 expression is the key to maintain the stem-like characteristics of some lung cancer cells [18].

Multiple studies have shown that Nanog and Oct4 are overexpressed in a variety of unrestricted, poorly differentiated, invasive solid tumors, and their down-regulation may inhibit tumor development [19].

Oct4 overexpression can lead to tumorigenicity, tumor metastasis, and distant recurrence after chemotherapy and chemotherapy [20] [21].

Therefore, the self-renewal ability of tumor cells can be reduced by inhibiting the expression of Oct4.