In 2020, the ROR1 target is favored by pharmaceutical giants such as Merck & Co., CStone Pharmaceuticals, etc. On October 29, 2020, Cstone Pharmaceuticals announced that it has reached a licensing agreement with LegoChem Biosciences to obtain the sole license to develop and commercialize LCB71 outside of Korea. LCB71 is an antibody-conjugated drug (ADC) targeting ROR1. The total amount of cooperation can exceed US$360 million. Now, LCB71 is at the stage of phase I in clinical.

Coincidentally, a week later, on November 5th, 2020, Merck & Co., Inc. and VelosBio jointly announced that the two parties have reached an agreement that Merck & Co., Inc. will spend US$2.75 billion to acquire VelosBio. VelosBio is a biomedical company dedicated to the development of "first-in-class" anti-cancer therapy targeting receptor ROR1. Its main product under research, VLS-101, is an antibody-conjugated drug (ADC) targeting ROR1. It is currently being used in two phase 2 clinical trials to treat blood cancers and solid tumors, respectively.

So what exactly is ROR1? Why is this target so popular with Merck and CStone? Continuing to read this article...

ROR2 is another member of the ROR family, and the amino acid sequence homology between ROR1 and ROR2 is 58%. Among them, ROR1 contains two subtypes: complete cell membrane receptor type ROR1 and truncated variants. Truncated variants are mainly divided into two subtypes, including membrane-bound ROR1I without extracellular structure and soluble ROR1 with only extracellular structure [2]. In fact, there is no difference in the expression of soluble ROR1 between normal people and cancer patients. Moreover, the expression in serum is very low or undetectable, and has nothing to do with the progression or severity. However, the intact membrane-bound ROR1 is specifically expressed at a high level in a variety of tumor tissues [3]. Note that the ROR1 mentioned in the following all refers to the membrane-bound ROR1 with a complete structure.

ROR1 is a transmembrane receptor tyrosine kinase protein. The gene of ROR1 is located on chromosome 1p31.3 with a length of 2814bp. The protein encoded by ROR1 gene is composed of 937 amino acids and has a molecular weight of about 105 kDa. The structure of ROR1 is highly conserved among biological species, such as human and mouse ROR1 amino acid sequence homology can reach 97%. As shown in Figure 1, human ROR1 consists of an extracellular immunoglobulin-like domain (Ig), two cysteine-rich domains (FZD), a proximal membrane kringle domain, and a single transmembrane structure. On the intracellular side, ROR1 possesses an intracellular tyrosine kinase domain (TKD), two serine/threonine enrichment domains (S/TRD) and a proline enrichment domain (PRD) composed [4]. 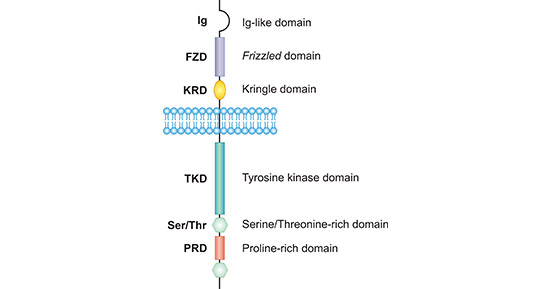 Figure 1. The structure of ROR1

*This figure is derived from the publication on Protein Cell [4]

The immunoglobulin-like domain and cysteine-rich domain are related to the function of ROR1 binding ligand. The FZD domain consists of 10 conserved cysteine residues and 5 corresponding disulfide bonds. FZD structures are also found in smooth muscle family receptors (such as Smo), frizzled family receptors (such as sFRP), as well as carboxypeptidase Z (CPZ), collagen α1 XVIII and low-density lipoprotein receptor-related protein (LRP). Most of these proteins can bind to Wnt protein and participate in signal transduction of the Wnt pathway.

Currently, a large number of studies have confirmed that ROR1 also binds Wnt5a through FZD and activates the non-canonical Wnt signaling pathway [5] [6]. The Kringle domain is relatively conserved in the ROR family and consists of 80 amino acids [7]. Its structural feature is that it contains three ring structures formed by disulfide bonds, and these three ring structures are also involved in the process of ROR receptor recognition of Wnt protein.

Wnt5a/ROR1 is highly expressed in various cancers. As the receptor of Wnt5a, ROR1 is involved in activating the NF-κB pathway of tumor cells. The NF-κB pathway is the helm of inflammation and immune regulation, and is constitutively activated in a variety of tumor types. As shown in Figure 2, Wnt5a activates the receptor ROR1 or FZD5, leading to Dv12/3 activation and Akt phosphorylation. Then, phosphorylated Akt promotes phosphorylation of IKKα to activate the IKK complex, which is responsible for the degradation of IκBα and the phosphorylating NF-κB subunit p65. And phosphorylated p65 transfers to the nucleus, promoting transcriptional expression of target genes including Wnt5a. The secretion of Wnt5a promotes a new round of autonomous feedback loop. The activation of the autonomous feedback loop ROR1/Akt/p65 pathway will further promote the secretion of pro-inflammatory factors (such as IL-6) and chemokines (such as CCL2). 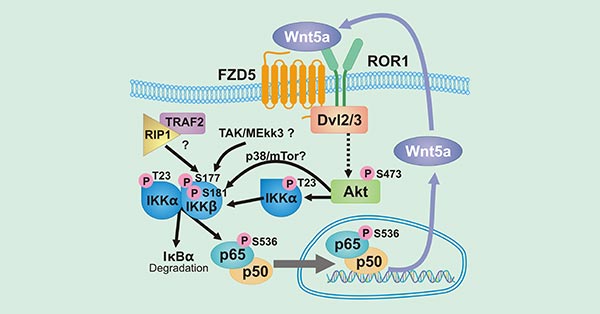 In addition, many studies have associated the expression of ROR1 with the activation of YAP/TAZ transcription, thereby enhancing tumorigenesis and chemoresistance [8] [9]. As shown in Figure 3, the binding of Wnt5a to the ROR1/FZD complex then further activates RhoA through binding to Gα12/13, thereby inhibiting Lats1/2 activity, leading to YAP/TAZ dephosphorylation and nuclear translocation. The YAP/TAZ translocated into the cell nucleus combined with TEAD can induce the transcription of genes involved in cell proliferation, stem cell self-renewal and tumorigenesis. Increased YAP/TAZ transcription can in turn up-regulate ROR1 expression [10]. 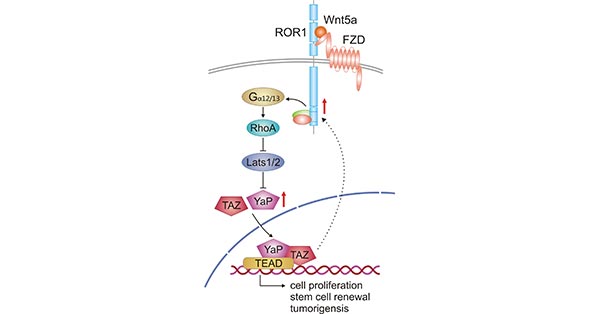 *This figure is derived from the publication on Cells [10]

ROR1 is considered to be a powerful potential target, because it is a tyrosine kinase receptor and has drug properties [11]. Secondly, it is expressed on the cell surface. More importantly, it is highly expressed in tumor cells, and the amount of expression in the organization is very low in adult health. At present, many companies are developing anti-cancer therapies targeting ROR1, including monoclonal antibodies, antibody-conjugated drugs (ADC), bispecific antibodies, and CAR-T therapy and other treatment modes (see the table below). Immune checkpoint therapy (ICT) has changed the treatment mode of many tumors. However, some tumor types have a low response rate to ICT. This is largely due to the high degree of immunosuppression in TME and lack of T cell infiltration in tumors. In this case, the use of ICT combined therapy targeting ROR1/Wnt5a may be able to solve the problem of low response rate.

To fully support pharmaceutical companies in the ROR1-targeted drug research for leukemia and tumor, CUSABIO presents ROR1 active protein products (Code: CSB-MP020067HU1d7) to assist you in your research on the mechanism of ROR1 or its potential clinical value.

Greater than 95% as determined by SDS-PAGE.