Glial fibrillary acidic protein (GFAP) belongs to class III intermediate filaments (IFs) and is specifically expressed in the cytoplasm of central nervous system astrocytes (AS). It acts as an astrocyte-specific marker. Together with microtubules and microfilaments, it forms the cytoskeleton of most eukaryotic cells, provides mechanical support for plasma membranes contacted by other cells or extracellular matrices, maintains astrocyte morphological stability, participates in blood-brain barrier formation, and regulates a variety of biological functions such as synaptic function. In addition, GFAP is involved in cell migration, movement and mitosis.

6. The Function of GFAP

8. The Relationship between GFAP and Disease

9. The Application of GFAP in Diagnostic 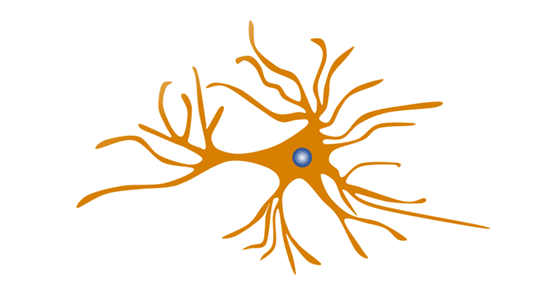 Glial fibrous acidic proteins were originally found in the brains of patients with multiple sclerosis (MS) [1]. In 1969, the amino acid (AA) composition of GFAP was first proposed [2]. In 1984, the mouse GFAP gene was first cloned, which is the beginning of GFAP molecular biology research. In 1989, the human GFAP gene was cloned [3].

The human GFAP gene is located on chromosome 17q21 and contains 8 introns and 9 exons, plus 2 alternative intron DNAs and 4 alternative exon DNAs to promote the formation of a DNA fragment with a size of about 10 kb and the mature mRNA produced by it is about 3 kb.

The GFAP gene has alternative splicing [6], which results in the production of multiple transcriptional variants encoding different subtypes of proteins. 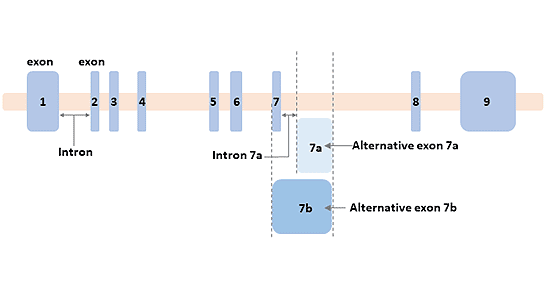 Figure 2 The structure of the GFAP gene

GFAP is an important skeleton protein of AS. The cytoskeleton of astrocytes is formed by the polymerization of a large number of GFAP monomers.

The GFAP monomer polymerizes to form a polymer, a component of the cytoplasmic intermediate filaments (IFs). IFs belong to the IFs superfamily type III, which is the same as vimentin, desmin, and peripheral proteins, with more than 70% homology between them.

The rod domain of the IF protein (310 - 350 AA residues) is highly conserved, while the size and amino acid sequence of the head and tail domains are highly polymorphic between species.

Different domains of GFAP participate in the formation of IFs in different ways.

As for the tail domain of type III IF protein, it is currently believed that it can stabilize protofilament interaction in vitro and control filament width, thus forming an appropriate IF network in vivo.

GFAP expression is affected by a variety of factors (such as brain injury and disease) and fluctuates during the diurnal cycle. GFAP gene expression is regulated by GFAP promoter. The basal promoter is essential for proper transcription, and other elements on the promoter determine expression specificity. TATA-box, an important element of the base promoter, is essential for binding to the general transcription factor IID (TFIID).

6. The Function of GFAP

Astrocytes are the most abundant cell type in the brain. They provide structural and functional support for neurons (including the release of neurotransmitter glutamate and nutrient factors), and play an important role in neurophysiological activities, nerve tissue regeneration and immunity, and the incidence of various neurological diseases.

Glial fibrillary acidic protein acts as the main cytoskeletal protein in astrocytes. GFAP forms a junction between the nucleus and cell membrane, participates in cytoskeleton reorganization in the cell, cell adhesion, maintaining myelin formation in the brain and neuron structure as well as involved in cell signal transduction pathways [8] [9], it is also involved in cell migration, movement, and mitosis. Glial fiber acidic protein can maintain stable morphology of astrocytes, participate in the formation of blood-brain barrier and regulate synaptic functions.

The specific role of GFAP is as follows:

GFAP is involved in cell movement and migration, but its contribution to the normal physiological or pathological function of different astrocytic subtypes is unclear. Transfection of glioma cell lines U1242 MG and U251 MG with a vector system that induces GFAP expression indicated that GFAP plays a role in cell movement. Studies have shown that mandatory expression of GFAP inhibits cell movement.

The general depolymerization of IFs will affect the directional migration of vesicles in astrocytes in vitro. The destruction of IF network will reduce the linear length of vesicles and reduce the fluidity of vesicles.

6.4 The Interaction of Astrocyte and Neuronal

Astrocytes are involved in a variety of neuronal functions, including synapse formation and plasticity, energy and redox metabolism, and synaptic homeostasis of neurotransmitters and ions. 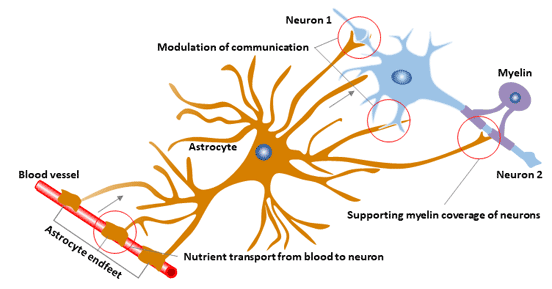 Figure 3 The function of astrocyte

The blood-brain barrier (BBB) is formed by capillary endothelial cells and surrounded by a specific end of the basal layer and perivascular astrocytes.

In the Jak-STAT signaling pathway, by regulating the expression of GFAP, it controls cell differentiation and regulates the cell cycle. The signal diagram is shown below: 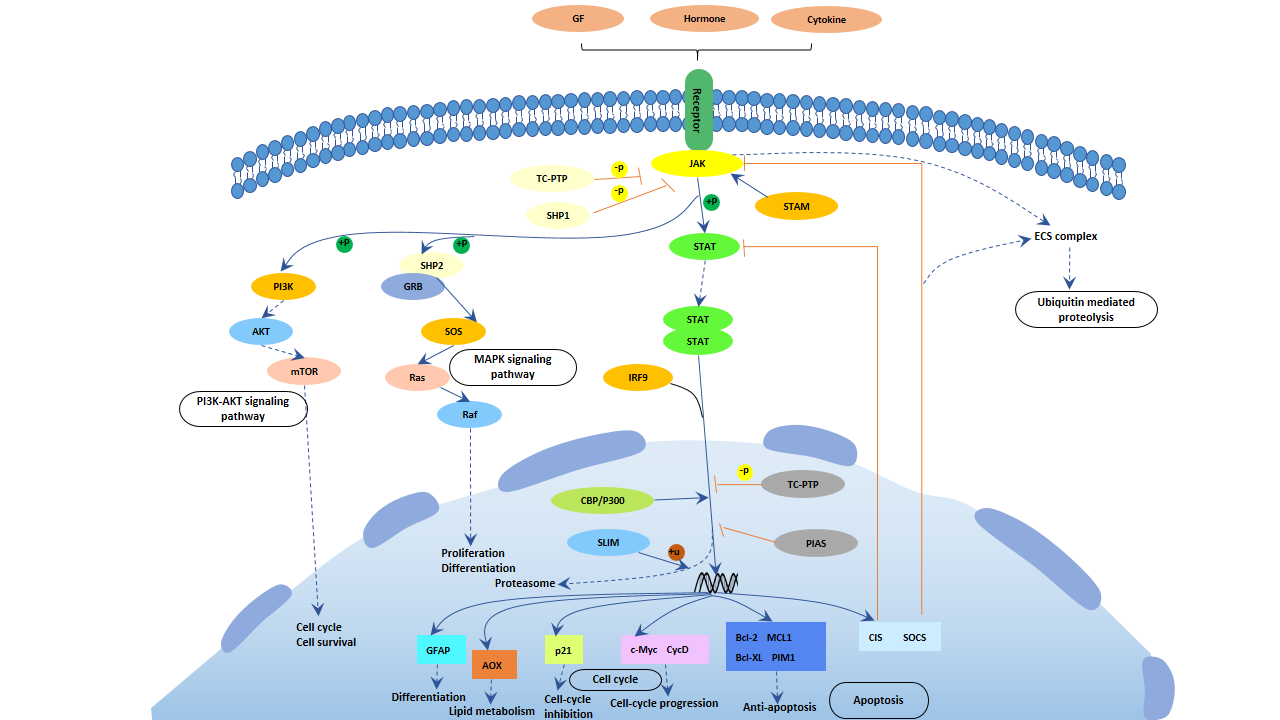 8. The Relationship between GFAP and Disease

Astrocytes are involved in a variety of central nervous system diseases, including trauma, ischemia, and neurodegeneration.

GFAP mRNA and protein levels are elevated in a variety of diseases. These diseases mainly include: Alzheimer's disease, scrapie and creutzfeldt-Jakob disease. In central nervous system injuries including cerebrovascular accidents, stab wounds and other injuries as well as experimental allergic encephalomyelitis, the expression of GFAP is also increased.

Astrocytic disease is a significant neuropathologic change in Alzheimer's disease (AD), and the severity of AD pathology is related to the density of reactive astrocytes and the strong up-regulation of GFAP expression in tissues and cerebrospinal fluid (CSF).

The hippocampus of Alzheimer's patients is more severely affected by astrocyte disease than the hippocampus of other older brains. There is a strong correlation between GFAP mRNA levels and the density of neuronal plaques in the frontal cortex of the AD brain.

Astrocytes play an important role in establishing and maintaining the blood-brain barrier. They can control the movement of soluble molecules and harmful substances, regulate brain homeostasis, regulate neuronal function and promote neurogenesis in adults. Therefore, dysfunction of astrocytes may affect the pathological process of depression.

Studies have found that GFAP is less expressed in schizophrenia, bipolar disorder, and depression [11]. GFAP is involved in the regulation of multiple neurotransmitters during the onset of depression.

Alexander disease belongs to the central nervous system degenerative disease, which is a genetic disease.

The disease is characterized by progressive myasthenia in infancy, with progressive spasm and mental disorders.

Messing et al proposed that the method of targeted therapy can prevent GFAP aggregation and pathological deposition, and increase the rate of proteasome clearance of GFAP.

Studies have shown that antisense oligonucleotides inhibit GFAP can provide a therapeutic strategy for the treatment of Alexandria [13]. 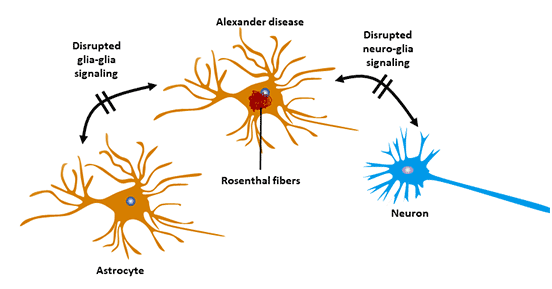 9. The Application of GFAP in Diagnostic

Under normal conditions, GFAP degrades intracellular or extracellular spontaneously, and the level of GFAP in blood is relatively stable. In pathological conditions, when the patient's central nervous system is injured, AS is damaged or dies, the GFAP polymer breaks down and decomposes, spilling out of the injured glial cells into the surrounding intercellular space and entering the blood through the blood-brain barrier, so that the level of GFAP in the blood is upregulated.

Therefore, GFAP humoral levels are an important means of assessing astrocytosis and activation, indirectly feeding back the extent of nerve damage.

Early, rapid, and accurate diagnosis of cerebral apoplexy has positive implications for its treatment and prognosis.