DT3C, a Powerful Tool for ADC Drug Internalization In Vitro

1. What is ADC Internalization?

Before detailing how DT3C mediates the detection of the efficiency of mAbs' internalization by cells, let's first understand what is ADC internalization. ADCs are composed of antibodie, linker and small molecule toxin. The biologically active small molecule drugs are coupled to monoclonal antibodies through linkers. Monoclonal antibodies (mAbs) are localized to the surface of tumor cells via the specificity and targeting of tumor cell-associated antigens. Upon binding to antigen, ADC-antigen complex enters cells through endocytosis (also called internalization). The linker is broken under the action of intracellular low pH or lysosomal proteins, releasing active cytotoxic drugs to damage DNA or prevent tumor cells from dividing, thereby killing tumor cells.

In the process of ADC design and development, the foremost thing is the selection of drug targets. For drug target selection, in addition to overexpression in tumors, another important factor is the efficiency of internalization, which is required for drug release activity. Whether an antibody can be internalized is mainly determined by the target, and the efficiency of antibody internalization is closely related to the antigen density, antibody affinity, and antibody and antigen-binding epitopes. Different antibodies to the same target will also show different internalization efficiencies.

2. How Does DT3C Mediate the Detection of Efficiency of mAbs' Internalization by Cells?

First of all, the internalization of antibodies in ADC drugs is definitely different from the internalization of pure antibody drugs. First, the molecular weight of ADC drugs is larger than that of pure antibody drugs. Under the same conditions, the internalization efficiency of the two is definitely different. Second, DT3C replaces the small molecule drug in the ADC drug molecule, which is an immunotoxin, and the mAb-DT3C conjugate mimics the ADC drug. As shown in the figure below: After the mAb-DT3C conjugate complex recognizes and binds to the cell surface antigen, the mAb-DT3C-antigen complex is internalized; then DT3C is cleaved by cytoplasmic furin protease, the catalytic domain of DT3C released into the cytoplasm. The catalytic domain of DT3C leads to ADP-ribosylation of elongation factor (EF)-2, which subsequently leads to cytotoxicity by inhibiting protein translation machinery. 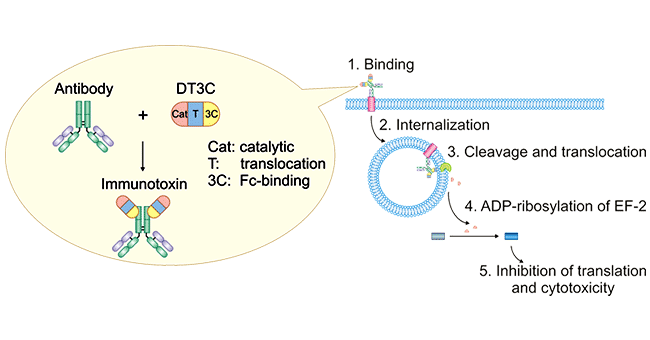 As an mAb from ADC drug internalization detection tool, the advantages of DT3C can be summarized as the following three points:

First, the mAb-DT3C conjugate is simple to prepare, can be formed after only 30 minutes of incubation at room temperature, and can exert the function of the ADC drug administered by the patient in vitro;

Second, DT3C can bind to any IgG from different species (such as human, mouse, rabbit, goat) to form mAb-DT3C conjugates, thus further expanding the extent of DT3C as a detection tool for mAb antibody internalization;

Third, mAb-DT3C conjugates significantly reduced cell viability only when the conjugates were internalized by target cells.

It is worth mentioning that, before DT3C, Mab-ZAP was the only tool to detect the efficiency of mAbs' internalization by cells. Mab-ZAP consists of mouse antibodies and the ribosome-inactivating protein saporin. When mAb-Mab-ZAP conjugates are internalized by cells, cells undergo apoptosis due to toxicity of saporin. Therefore, whether the mAb is internalized by the cells can be detected by the viability of the cells. However, it cannot be excluded that Mab-ZAP itself may reduce mAb internalization efficiency to some extent, since Mab-ZAP is a macromolecule containing anti-mouse antibodies. Compared with Mab-ZAP, the molecular weight of mAb-DT3C conjugate is stable and smaller than mAb-Mab-ZAP. Moreover, related experimental data showed that the internalization efficiency of mAb-DT3C was higher than that of mAb-Mab-ZAP.

3. What are the Internalization Pathways of ADC Drugs?

Clathin-mediated endocytosis (CME) involves several sequential and partially overlapping steps. For certain receptors at the plasma membrane, CME can occur constitutively; whereas other receptors require ligand or antibody binding to initiate CME or enhance its activity. CME starts when endocytic capsid proteins in the cytoplasm begin to accumulate on the inner leaflet of the plasma membrane. Capsid proteins continue to assemble and grow by recruiting and interacting with additional protein adaptors from the cytoplasm. Key adaptor proteins make membrane bending to concentrate internalized receptors/ligands into a "clathrin-coated pit" (CCP). The CCP neck is separated from the plasma membrane by rupture at the point where the CCP neck contracts as the CCP becomes larger invagination. Actin polymerization contributes to pull the CCP "inward" into the cytoplasm until complete division, where the CCP is released and becomes a clathrin-coated vesicle (CCV). Finally, the CCV coat disintegrates and the CCV fuses with endosomes for sorting to defined subcellular locations, or can be recycled back to the cell surface [3].