What You Should Know The Common Sense of Neurodegeneration

Neurodegeneration is a series of neurological diseases caused by the loss of nerve structure and function and will be worsen over time. Neurodegenerative diseases (NDD) are highly damaging brain lesions and have gradually become a worldwide health care problem, including Alzheimer's disease (AD), Parkinson's disease (PD), amyotrophic lateral sclerosis (ALS), and Huntington's disease (HD). Unfortunately, for these diseases, effective treatment are still limited to the control of the disease, and there are no modified drugs that can prevent the disease from happening. Although these diseases have their own characteristics, in many cases, they have some of the same symptoms and neuropathological conditions. In this article, we introduce several common sence of the four neurological diseases, involving definition, incentives and current status of treatment. 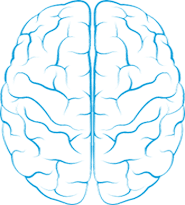 Alzheimer's disease (AD) is a type of brain disorder that causes problems with memory, thinking and behavior.

AD causes a gradual decline in memory, thinking and reasoning skills. It is divided into three stages with progression of disease, including stage 1, stage 2 and stage 3. The symptoms are different in stages.

AD is associated with genetic, lifestyle and environmental factors that affect the brain cells over time. From a genetic perspective, Alzheimer's disease is heterogeneous and complex, with no single or simple genetic model. Risk genes for Alzheimer's disease have significant effects on disease susceptibility and age of onset [1]. In general, carrying the Alzheimer's gene gives you a higher chance of developing Alzheimer's disease. So far, scientists have confirmed the correlation between multiple gene mutations and Alzheimer's disease, such as amyloid protein precursor protein gene (APP), Presenilin-1(PS-1), Presenilin-2(PS-2), Apolipoprotein E (ApoE), etc. [2]. Please click here to obtain more information about AD.

So far, although there are many drugs that can alleviate the development of symptoms, there is no thorough treatment. Prevention is better than cure, and effective prevention of controllable risk factors is quite effective. You can click here to view more details.

Huntington's disease (HD), also known as Huntington's chorea, is a progressive brain disorder caused by a defective gene on chromosome 4 - one of the 23 human chromosomes that carry a person's entire genetic code. The defective gene codes the blueprint for a protein called huntingtin. For that reason, HD is a typical hereditary disease. In another word, you can't "catch" it from another person. This disease causes uncontrolled movement, emotional problems, and loss of thinking ability.

HD causes movement, cognitive, and psychiatric disorders, with symptoms widely varying between individuals. Symptoms of HD usually develop between ages 30 and 50, but they can appear as early as age 2 or as late as 80, and they tend to develop in stages, including early stage, middle stage and late stage.

As mentioned earlier, HD, a genetic disease, results from a gene defect inherited in an autosomal dominant fashion from parents. In 1993, the gene caused HD was identified by researchers and named HTT. Everyone has the HTT gene, but in some families an abnormal copy of the gene gets passed from parent to child. If you have a parent with Huntington's disease, you have a 50% chance of having the gene and developing the disease. The HTT gene provides instructions for making a protein called huntingtin. Although the function of this protein is unknown, it appears to play an important role in nerve cells (neurons) in the brain.

The HTT gene defect involves extra repeats of one specific chemical code in one small section of chromosome 4. The normal HTT gene includes 17 to 20 repetitions of this code among its total of more than 3,100 codes. The defect that causes HD includes 40 or more repeats. Genetic tests for HD measure the number of repeats present in an individual's huntingtin protein gene. As shown in the Fig. 1. 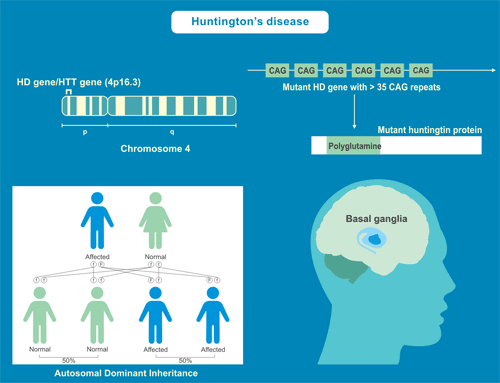 Experts strongly recommend professional genetic counseling both before and after genetic testing for Huntington's disease [3].

Currently, there is no cure for Huntington's disease and no way to slow the brain changes it causes. Treatments aim at managing the symptoms. Medication can help control fidgety movements. For example, monoamine depletors, one kind of drugs is to treat involuntary and writhing movements; antidepressants: antidepressants to treat depression; and antipsychotic drugs, one kind of drug is to reduce symptoms of mood disorders and psychosis, et al.

Furthermore, Self-care also is one way for treatment. For example:

Although scientists don't yet understand the normal function of huntingtin protein or how a few dozen extra repeats in its genetic blueprint lead to the devastating symptoms of Huntington's disease. Researchers are eager to solve these mysteries to find the answer to Huntington's. These solutions also may offer important insights into a wide range of other brain disorders, including Alzheimer's, Parkinson's disease and amyotrophic lateral sclerosis (ALS).

The most recognizable symptoms in Parkinson's disease are movement ("motor") related. Non-motor symptoms, which include autonomic dysfunction, neuropsychiatric problems, and sensory and sleep difficulties, are also common. Parkinson's disease signs and symptoms may vary from person to person. Early signs may be mild and go unnoticed. Symptoms often begin on one side of your body and usually get worse on the same side, even after symptoms begin to affect both sides.

Signs and symptoms may include:

It is known that many of the symptoms of Parkinson's disease are due to a loss of neurons that produce a chemical messenger in your brain called dopamine. However, the exact cause of this damage is still unknown. There are several factors which appear to play a role, including environment and genetics.

For the genetics, researchers have identified specific genetic mutations that can cause Parkinson's disease, including SNCA, LRRK2, GBA, PRKN, PINK1, PARK7, VPS35, EIF4G1, DNAJC13 and CHCHD2 [4].

SNCA gene mutations are important in Parkinson's disease because the protein that gene encodes, alpha-synuclein, is the main component of the Lewy bodies that accumulate in the brains of people with PD [5]. Mutations in some genes, including SNCA, LRRK2 and GBA, have been found to be risk factors for "sporadic" (non-familial) PD. A mutation in GBA presents the greatest genetic risk of developing Parkinson's disease.

Several Parkinson-related genes are involved in the function of lysosomes, organelles that digest cellular waste products. It has been suggested that some cases of PD may be caused by lysosome dysfunctions that reduce the ability of cells to break down alpha-synuclein [6].

Moreover, certain medications, toxins and other diseases can produce symptoms, similar to Parkinson's disease, and then it is known as secondary Parkinsonism, which may be reversible.

Besides, there are several risk factors for Parkinson's disease, involving age, heredity and exposure to toxins.

Currently, because the cause of Parkinson's is unknown, proven ways to prevent the disease also remain a mystery. Although Parkinson's disease cannot be cured, medications can help control symptoms. In some later cases, surgery may be advised.

Besides, self-care also very important for treatment, including getting educated about the disease and physical activities (improving strength, flexibility, posture, balance, aerobic capacity, coordination and agility).

Amyotrophic lateral sclerosis (ALS), also known as Lou Gehrig's disease or motor neurone disease (MND), is progressive nervous system disease that affects nerve cells in the brain and the spinal cord and causes disability. There are two different types of ALS, sporadic and familial. Sporadic, the most common form of the disease in the U.S., accounts for 90 to 95% of all cases. Familial ALS means the disease is inherited and accounts for 5 to 10% of all cases in the U.S. In those families, there is a 50% chance each offspring will inherit the gene mutation and may develop the disease. Compared with other neurological disorder, ALS is very rare (fewer than 20,000 cases per year in US). Fig.2. The brief introduction of ALS

ALS often starts in muscle twitching and weakness in a limb, or slurred speech, and then spreads to other parts of your body. With the disease advances and nerve cells are destroyed, your muscles progressively weaken. Eventually, ALS affects control of the muscles needed to move, speak, eat and breathe. But, note that, ALS doesn't usually affect your bowel or bladder control, your senses or thinking ability. In another word, it's possible to remain activity with your family and friends.

Currently, doctors usually don't know why ALS occurs. About 5 to 10 percent of cases indicates that ALS is inherited, while the rest have no known cause. Now, researchers are studying several possible causes of ALS, involving gene mutation, chemical imbalance, disorganized immune response and protein mishandling.

For ALS diagnosis, it often requires lab test or imaging. Nowadays, there is no known cure and treatment available for ALS. Treatment just can slow down the disease progression and prevent further complications. Here we numerate several medications for ALS management.

Riluzole, one kind of glutamate antagonist, works by decreasing release of the excitatory neurotransmitter glutamate from pre-synaptic neurons. It has been found to modestly prolong survival by about 2–3 months. But the most common side effects are nausea and a lack of energy (asthenia).

Edaravone, one kind of Neuroprotective agent, slow the decline in function in a small group of people with ALS who meet very strict criteria; there is no evidence that edaravone is effective in all people with ALS. It may work by protecting motor neurons from oxidative stress. But, this medication also has several side effects. Among of them, the most common side effects are bruising and gait disturbance.

Besides, breathing support also is an important measure for ALS management. Because respiratory failure is the most common cause of death in people with ALS. It is caused by the progressive death of the motor neurons that control the muscles needed to breathe.