Costimulatory/Coinhibitory: Is B7-H3 An Enemy or A Friend?

According to the functions, the B7 family can be divided into three groups [2].

Group 3: B7-H3 (CD276) and B7-H4 (B7x). Their receptors have not been identified, but are thought to be involved in co-stimulation and co-inhibition pathways.

B7 homolog 3 protein (B7-H3), also known as CD276, is an important immune checkpoint molecule in the B7-CD28 family. It is a member of the B7 family identified in the cDNA library of human dendritic cells in 2001 [3]. CD276 is mainly present in membrane proteins and soluble forms. Soluble CD276 (soluble CD276, sCD276) is cleaved by membrane proteins by metalloproteinases [4].

In addition, B7-H3 protein was also found in exosomes and other extracellular vesicles. CD276 is a T cell co-suppressor molecule with partial costimulatory function. CD276 can effectively inhibit the function of T cells and NK cells, and also has an effect on bone development.

CD276 is a type I transmembrane glycoprotein consisting of 316 amino acids with a molecular weight of 45-66 kDa, which has a similar molecular structure to B7-H1 (PD-L1).

It contains a putative 28AA signal peptide, an extracellular region of 217AA consisting of immunoglobulin constant (IgC) and variable (IgV) structures, a transmembrane region and a 45 amino acid cytoplasmic domain. CD276 gene consists of 10 exons, of which 4-7 exons encode the extracellular IgV-IgC domain.

B7-H3 has been found to exist in two forms: 2Ig-B7-H3 and 4Ig-B7-H3. 2Ig-B7-H3 is expressed in murine and human cells with extracellular IgV-IgC structure; 4Ig-B7-H3 is expressed only in human cells and consists of a tandem repeat of the IgV-IgC-IgV-IgC structure. The predominant form of human B7-H3 is 4IgB7-H3, located on chromosome 15. The mouse B7-H3 gene is located on chromosome 9 [5]. B7-H3 is one of the most evolutionarily conservative members of the B7 family, as it is commonly expressed in species ranging from bony fish to mammals. 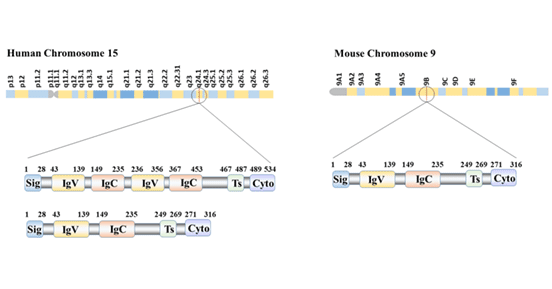 CD276 transcripts are widely expressed in tissues such as heart, liver, placenta, prostate, testis, uterus, pancreas, small intestine, and colon. The expression of the CD276 protein is more restricted to the cell surface, such as activated dendritic cells, monocytes, T cells, B cells, and NK cells [6].

The receptor for human B7-H3 has not been found. However, in mouse models, TLT-2, a trigger receptor expressed in the myeloid cell (TREM) receptor family, has been identified as a potential receptor for mouse B7-H3 [7].

TLT-2 has been shown to be a costimulatory TCR for B7-H3. The interaction of B7-H3 with TLT-2 will result in an increase in IL-2 and IFN-γ production. Blocking the interaction between B7-H3 and TLT-2 with a mAb against B7-H3 or TLT-2 is effective in inhibiting CD8+ T cell-mediated contact hypersensitivity [7].

T cells: B7-H3 may play a dual role in the immune system. On the one hand, B7-H3, as a costimulatory molecule, can co-stimulate CD4+ and CD8+ cells, induce cellular immunity, and selectively enhance the production of interferon-gamma (IFNG) in T-cell receptor signaling.

On the other hand, experiments in humans and mice have demonstrated that B7-H3 also has a co-inhibitory effect [10], which can inhibit Treg cells, thereby allowing tumor escape from the immune response. This may be related to NFAT, NF-kappa B and AP-1 factors [11]. B7-H3 indirectly activated NF-κΒ, PI3K/Akt, JAK/STAT3 pathway induced cell survival and proliferation. B7-H3 also increases ROS and HIF1a levels, leading to increased glycolysis. 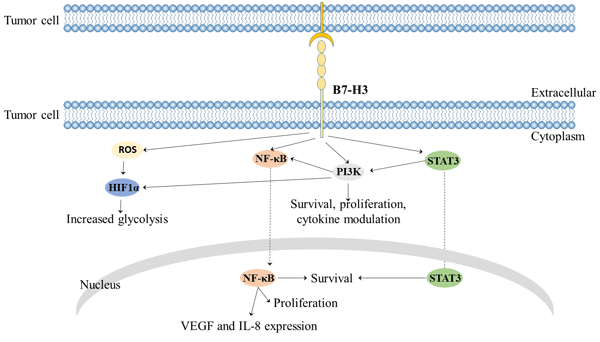 NK cells: CD276 inhibits NK cell activity in tissue culture, thereby reducing the function of NK cells. This suggests that there should be a receptor for B7-H3 on NK cells.

In gliomas, a higher tumor grade is associated with a higher percentage of CD276 expression. Both soluble CD276 and cell-bound CD276 are capable of inhibiting NK cell-mediated cleavage. 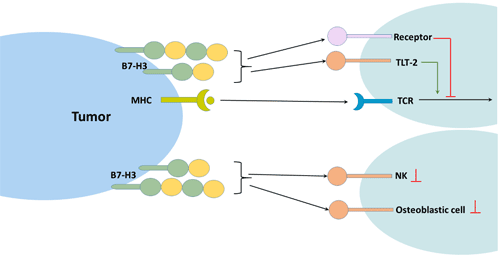 High expression of B7-H3 in cell lines of bladder adenocarcinoma, prostate cancer and melanoma has been shown to promote invasion and metastasis of tumor cells. In melanoma cells, silencing B7-H3 can reduce the invasion ability of matrix gel. This may be because B7-H3 silencing reduces the expression of transfer-related proteins, such as matrix metalloproteinase (MMP)-2, signal transduction and transcriptional activator 3 (STAT3), and IL-8.

B7-H3 molecules are highly expressed in lung cancer, colorectal cancer, membrane adenocarcinoma and other cancer tissues, and are associated with tumor spread or poor prognosis.

B7-H3 is expressed in a variety of different non-small cell lung cancer cell lines [12]. Studies in patients with NSCLC have shown that B7-H3 has an inhibitory effect on the immune system of NSCLC [13].

High expression of B7-H3 protein is associated with poor prognosis [14], and B7-H3 can also be involved in the development of NSCLC by inducing monocytes to develop into anti-inflammatory cells [15].

The expression between B7-H1 (CD80) and B7-H3 was positively correlated, and their expression was significantly correlated with NSCLC lymph node metastasis. B7-H3 may be a potential marker for the diagnosis of NSCLC invasion and metastasis, but it also requires a large amount of clinical data to prove it.

B7-H3 is abnormally expressed in prostate cancer, which may play a role in regulating the proliferation and invasion of the prostate cancer cell line PC-3 [16]. In addition, B7-H3 can also inhibit the immune response by regulating Treg cells, thus mediating the tumor escape immune response. Higher B7-H3 expression was associated with an increased risk of biochemical recurrence after radiotherapy [17].

In a mouse model of breast cancer, it was found that B7-H3 promotes the stabilization of hypoxia-inducible factor-1 (HIF1α) through reactive oxygen species, thereby promoting tumor uptake of glucose and growth [20].

The expression of B7-H3 in primary tumors is significantly associated with tumor size and lymphatic invasion. B7-H3 is a potential predictor of future diagnosis of breast cancer [21].

B7-H3 has been shown to be expressed in most malignant neuroectodermal tumors, and B7-H3 expression levels are positively correlated with histological tumor grade [22].

B7-H3 is highly expressed in various tumor tissues and is closely related to tumor progression. The tail of B7-H3 cytoplasm is short, has no known signal motif, and its receptor has not been recognized. Nevertheless, B7-H3 molecule is considered as a promising immunotherapy research direction.

Currently, most targeted therapies regard B7-H3 as a negative regulator of T-cell-mediated immune response in tumors, and specific blocking of B7-H3 could provide a new targeted therapy similar to anti-CTLA-4 mAb therapy.

Human cancer immunotherapy strategies for B7-H3 mainly include the following: 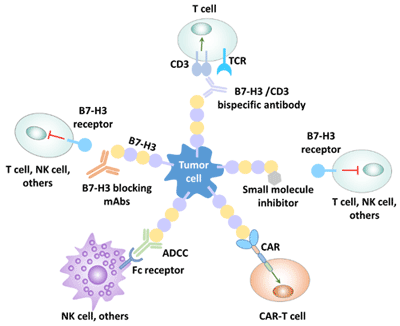 Enoblituzumab (MGA271), which is being studied, is a monoclonal antibody (mAb) of B7-H3 that exerts antitumor activity by antibody-dependent cell-mediated cytotoxicity (ADCC). In a clinical phase I trial (test NCT01391143), the antibody was shown to have good tolerance and antitumor activity.

An antibody drug bound to 8H9, a monoclonal antibody labeled iodine-131, has been clinically successful in the rescue and treatment of patients with metastatic central nervous system tumors of neuroblastoma. Phase I CD276 antibody clinical trials of radiolabolic marker 8H9 in patients with peritoneal cancer, glioma and advanced central nervous system cancer (NCT01099644, NCT01502917 and NCT00089245) are currently under way.

B7-H3 CAR-T therapy for glioblastoma is currently in Phase Ⅱ.