With the High Potential in Cancer Immunotherapy, CD40 Is Triggering Attention

Last month saw the newest FDA-approved orphan drug APX005M, an anti-CD40 agonist antibody. The company Apexigen announced that FDA has granted orphan drug designation status to APX005M for the treatment esophageal and gastroesophageal junction cancer, as well as pancreatic cancer. Apexigen Inc., delving into a new generation of antibody drugs for tumors, it has been said that the company will bring $158 million total equity financing for the clinical trials. Initially, the importance of CD40 was not appreciated after it had been first identified. Now, many investigators are working on the CD40 targeting and focusing on new drug designs. But what's CD40? How's the role of CD40 in anti-tumor therapies?

1. The Structure and Expression of CD40 and Its Ligand

4. CD40 As a Therapeutic Target in Cancer

1. The Structure and Expression of CD40 and Its Ligand

CD40 (also known TNFRSF5, tumor necrosis factor receptor superfamily member 5), a 45-50 kDa type I glycoprotein, is a member of tumor necrosis factor receptor (TNFR) superfamily protein [1]. CD40 is widely expressed by antigen presenting cells (APCs) or all stages of B cells [2]. The human CD40 gene is located on chromosome 20q11-13 and encodes a polypeptide chain of 277 amino acids [3]. To better present CD40 structure, CD40 protein is depicted in Fig.1, which is a type I transmembrane receptor. The extracellular region of CD40 is cysteine-rich with 20 residues, marked by the horizontal lines. Initially, four cysteine-rich domains were firstly discovered [4]. Subsequently, researchers have suggested that each domain can be divided into two cysteine modules, called A1, A2 and B1, B2 (Fig.1). 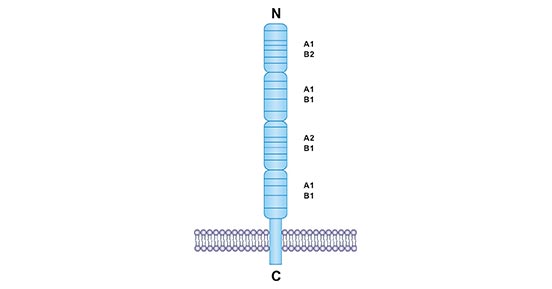 CD154 (known as CD40L) is the ligand of CD40, a type II transmembrane protein, with a variable molecular weight between 32-39 kDa [6, 7]. CD40L is mainly expressed on activated CD4+ T cells and is a member of TNF superfamily [8]. The human CD40L gene is located on the X chromosome, Xq26.3‑Xq27.1 [9]. The structure of the TNF-like region of human CD40L has been resolved by X-ray crystallography. CD40L boasts an intracellular amino terminus and an external carboxy terminus. The three-dimensional organization was shown in Fig.2 [5]. 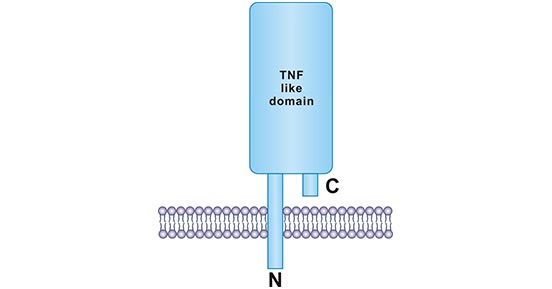 CD40/CD40L interaction is considered as one of the most effective APC activation signals [11]. Generally, CD40/CD40L mediates a variety of immune processes, such as cytokines secretion; the survival, proliferation, differentiation and adhesion of B cells; the development of memory B cell generation and germinal centres [12].

To be more specified, firstly, activation of CD40 on APCs strongly promotes CD80/CD86 expression and induces IL-12 production, thereby enhancing T cell co-stimulation or skewing of T-helper (Th) in the Th1 direction (Fig.3A). Besides, CD40/CD40L interactions have a direct CD40L-mediated effect on T cell activation and T cell cytokine production via a series of signaling mechanisms (Fig.3B). Moreover, it has been demonstrated that activation of CD40 on APC/dendritic cells (DCs) enables the process of cytotoxic T cells (CTLs) priming (Fig.3C). CD40 activation on APCs has additional effects, such as production of inflammatory mediators and some newly identified gene products with unknown function yet (Fig.3D) [5, 13]. These specific factors play a huge part on APCs. 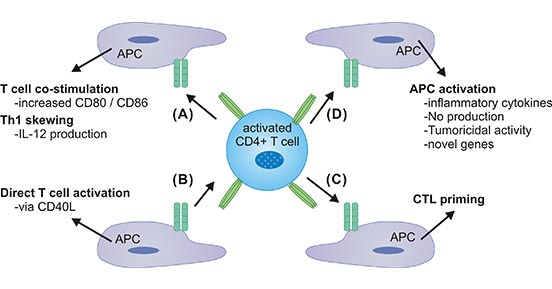 Previous studies confirmed that CD40/CD40L triggers activation on B cells but induced apoptosis of tumor cells. Like some other members of the TNFR family, CD40 signaling is usually mediated via a complicated series of downstream adapter molecules rather than by inherent kinase or other signal transduction activity of the CD40 cytoplasmic tail [14, 15]. Existing studies on CD40/CD40L interactions have suggested that CD40/CD40L has effects on key molecules in diverse tumor-immune systems. For example, CD40L in certain B-cell malignancies causes an increase in the expression of anti-apoptotic factors such as Bcl-XL, TNF-α-induced protein 3(TNFAIP3), B-cell lymphoma 2 related protein A1a, and c-FLIP. These factors protect the cells from apoptosis induced by apoptotic agents, such as serum withdrawal, IgM and anti-Fas, TNF-related apoptosis-induced ligand [15, 16]. In addition, low-level of CD40/CD40L could facilitate malignant cell growth, proliferation, whereas protect these cells from apoptosis [15].

4. CD40 As a Therapeutic Target in Cancer

To activate the CD40/CD40L pathway in the clinical therapeutic, agonistic CD40 antibodies as the major approach have been widely investigated, which enhance the activity of the CD40/CD40L axis to promote CD40 anti-tumor effects. Commonly, antibody drugs have been developed to either activate (agonists) or suppress (antagonists) the CD40 immune pathway. Intriguingly, researchers recently revealed that an antagonist CD40 antibody can be transformed into an agonist by simply modifying the "constant" domain of the antibody, which gives novel insights into clinical research of CD40 targeting [17]. Apparently, more and more researchers turned attention to the investigation of CD40 anti-tumor therapy. But reported drugs like Ravagalimab and Bleselumab have just received FDA approval for clinical use. Globally, there is a huge gap in the market of anti-CD40 monoclonal antibodies (mAbs) that desperately needed to be filled. Here, summary of clinical drugs of anti-CD40 mAbs was shown in the table.

*This data derives from pharmacodia

[6] ZIRLIK, A., D. WOLF, and K. PETER, Selective targeting of the CD40L/Mac-1 interaction by small peptide inhibitors and its use for the treatment of inflammation and atherogenesis, 2017.