Melanoma, the Most Serious Type of Skin Cancer

Skin cancer is the most common of all human cancers. In 2020, more than 100,000 people in the U.S. are expected to be diagnosed with some type of the disease. Nearly 7,000 are expected to die. There are three major types of skin cancers: basal cell carcinoma (BCC), squamous cell carcinoma (SCC), and melanoma. Among of them, melanoma accounts for only about 1% of skin cancers but causes a large majority of skin cancer deaths. So what is melanoma? How does melanoma develop? And how to diagnose it?

2. How does Melanoma Develop?

3. What are the Risk Factors of Melanoma？

4. What are the Symptoms of Melanoma?

5. What are the Mechanisms of Melanoma?

6. How to Diagnose Melanoma?

7. What are the Treatment of Melanoma?

Melanoma, usually referred to as malignant melanoma, is a highly malignant tumor derived from melanocytes which control the pigment in your skin. The figure 1 shows melanoma cells extending from the surface of the skin into the deeper skin layers. Melanoma occurs mostly in the skin, but also in the mucous membrane and viscera, accounting for about 3% of all tumors. Melanoma is the deadliest form of skin cancer and strikes tens of thousands of people around the world each year. The number of cases is rising faster than any other type of solid cancer [1]. 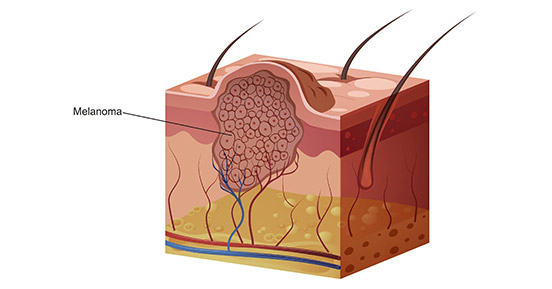 Figure 1. a diagram of melanoma

2. How does Melanoma Develop?

Melanoma occurs when something goes wrong in melanocytes, the cells producing the pigment melanin. Normally, skin cells develop in a controlled and orderly way — healthy new cells push older cells toward to the surface of skin, where they die and eventually fall off. But when some cells undergo DNA damage, new cells may start to grow out of control and can eventually form a mass of cancerous cells. So what damages DNA in skin cells?

In fact, it isn't still clear. It may be a combination of factors, including environmental and genetic factors, causes melanoma. Currently, doctors believe exposure to ultraviolet (UV) radiation from the sun and from tanning lamps and beds is the leading cause of melanoma. UV light doesn't cause all melanomas, especially those that occur in places on your body that don't receive exposure to sunlight. This suggests that other factors may contribute to your risk of melanoma. Regarding to the risk factors of melanoma, continuing to read…

3. What are the Risk Factors of Melanoma？

4. What are the Symptoms of Melanoma?

Studies reported that the origin of melanocytes is associated with the fetal period and the melanocyte precursors. The melanocyte precursors are produced in the neural ridge which migrate to various localizations in the body during fetal development, including the skin, meningeal coverings, mucous membrane, the upper part of esophagus, and the eyes. So melanoma can develop by malignant transformation of melanocytes anywhere on your body [2] [3]. The most likely areas, though, are chest and back for men, legs for women, neck and face, because these areas have more exposure to the sun than other parts of the body.

The first symptoms of melanoma often are changes in an existing mole and the development of a new pigmented or unusual growth on your skin. Clues that a mole might be melanoma are: irregular shape, irregular border, multicolored or uneven coloring, larger than a quarter of an inch, changes in size, shape, or color, itchiness or bleeding. Sometimes, the skin will appear normal even though melanoma has begun to develop.

As well as sun exposure, distinct genetic alterations have been identified as associated with melanoma [4]. In the next section, we illustrate the mechanisms of melanoma as brief.

5. What are the Mechanisms of Melanoma?

Melanoma caused by transformation of melanocytes requires a complex interaction of exogenous and endogenous events. There are tremendous progress has been reported to make in unravelling the genetic basis of melanoma [5] [6] [7]. As the figure 2a shows, under normal conditions, mitogen-activated protein kinase (MAPK) and phosphatidylinositol 3‑kinase (PI3K)–AKT signaling permit balanced control of basic cellular functions, including cell cycle regulation, survival, motility and metabolism.

However, in melanoma, several genetic alterations depicted in the figure 2b are frequently observed, leading to constitutive pathway activation (indicated by thick arrows) and loss of cellular homeostasis. Malignant transformation can require combinations of genetic defects. The functional consequences of genetic events determine whether mutations can coexist or remain mutually exclusive. For example, mutations in NRAS and BRAF occur very rarely in the same melanoma cell, whereas combined genetic alterations of BRAF and PTEN are common. *this diagram is derived from publication on Nature Reviews [4].

6. How to Diagnose Melanoma?

There are a series of tests and procedures used to diagnose melanoma, including:

7. What are the Treatment of Melanoma?

If there's a diagnosis of melanoma, it's important to determine the stage. This will provide information on your overall outlook and help guide treatment. Treatment depends on the stage of melanoma. Melanoma is staged based on the size of the tumor and the extent to which the cancer has spread. The stages of melanoma are divided into five stages. We collect the stages and treatments of melanoma on the following table.

Besides, stages 3 and 4 generally require some additional treatments, involving: