GCGR: A Regulator of Energy Balance Holds a Potential in Treatment Diabetes

With the increase in the number of diagnosed diabetes, the diabetes drugs market is estimated to grow year by year. The new drugs design over diabetes treatment has soaked up more ink and excited more passion in recent years. GCGR, as a key molecule for regulating blood glucose levels and glucose homeostasis has triggered attention among researchers. Certain GCGR targeted drugs have been marketed from pharmaceutical companies such as Novo Nordisk and Eli Lilly. In addition, GCGR combined with multi-target receptor agonists has also become a focus in the field of diabetes treatment. At present, more domestic and foreign companies are entering the market, which will further occupy market shares of multinational giants like Novo Nordisk and Eli Lilly. It is believed that the trend will set to shake up GCGR marketing in the near future. Today, let's learn more about GCGR.

1. What is the Structure and Expression of GCGR?

2. What is the Ligand of GCGR?

4. The Role of GCGR in Diabetes

6. What Reagents You May Need for GCGR-Targeted Research?

1. What is the Structure and Expression of GCGR?

Glucagon receptors (glucagon receptors, GCGRs) belong to the family of class B G-protein-coupled receptors (GPCRs) that play a key role in the maintenance of glucose homeostasis in humans [1]. Other related G-protein-coupled receptors include glucagon-like peptide-1 receptor (GLP-I), glucagon-like peptide-2 receptor (GLP-2), and gastric inhibitory peptide receptor [2]. The human GCGR gene is localized on chromosome 17q81 and has a molecular weight of 62 kDa [3]. Although in 2013, the transmembrane domain (TMD) of GCGR was resolved. However, due to the flexibility and diversity of the full-length class B GPCR conformation, its structural resolution is extremely difficult. The current technical tools have revealed that the class B G protein receptor is characterized by a large molecular weight and tertiary structure of the N-terminal Extracellular domain (ECD) connected to the TMD. Based on free electron laser analysis, the full-length GCGR protein was found to possess 477 amino acids, the N-terminal extracellular region, seven transmembrane helices and the eighth helix structure (Figure 1) [4]. *The figure was derived from the MAbs publication [4]

2. What is the Ligand of GCGR?

The natural ligand of GCGR is Glucagon. Glucagon is secreted by pancreatic alpha cells (α-cells) and is a straight-chain peptide containing 29 amino acids [7]. In contrast to the action of insulin, glucagon is a catabolic hormone that promotes gluconeogenesis and catabolism, inhibits hepatic glycogen synthesis, and acts to increase blood glucose, with the main target organs being the liver and kidney. The physiological effects of glucagon are mediated through the GCGR. Glucagon binds to the receptor to activate the Gs protein, which activates adenylate cyclase [7]. The receptor GCGR binds to the natural ligand glucagon to regulate glucose homeostasis in vivo and is an important drug target for type 2 diabetes [8]. It has been suggested that both the extracellular region (ECD) and the transmembrane region (TMD) of the class B GPCR are involved in the binding of peptide ligands [9]. Although the structure of the transmembrane region of GCGR was resolved, the resolution of the full-length protein structure is challenging. Therefore, the resolution of the full-length protein structure of the GCGR receptor is essential for the study of the interaction pattern and activation mechanism of GCGR and the ligand.

In vivo, GCGR binds to its ligands and exercises its function mainly through activation of Gs proteins. However, an increasing number of studies have shown that GCGR can also interact with other types of G proteins, such as Gi and Gq, to exert different biological effects. It implied the complexity and diversity of the GCGR signaling process [10]. It has been shown that GCGR, when not activated, has an ECD-TMD interaction that inhibits receptor activity, whereas once GCGR binding to the ligand that release the intrinsic activating properties of the ECD, shifting GCGR from an inhibited to an activated state.

GCGR activation by ligands regulates hepatic glucose synthesis and catabolism in vivo, thereby maintaining blood glucose concentrations in vivo. As denoted in Figure 2, activated GCGR induces adenylate cyclase activation by binding to the heterotrimeric Gs, which generates cAMP and activates protein kinase A, resulting in increased hepatic glycogenolysis and gluconeogenesis, leading to increased blood glucose in vivo. GCGR/Glucagon also activates another signaling pathway, which is the increase in the second messenger IP3 and Ca2+ by coupling Gq [11]. To better know the receptor signaling mechanisms, it is important for further exploration of structural information on GCGR binding and activation with G proteins. 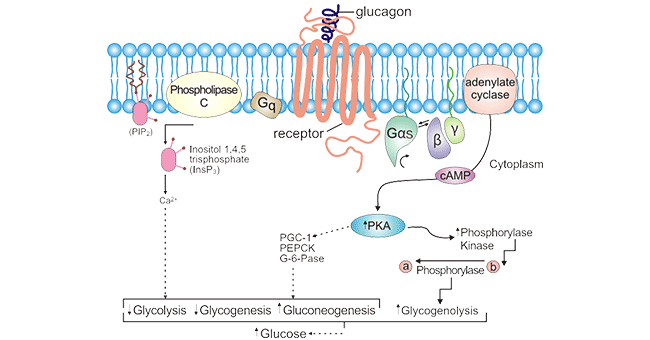 4. The Role of GCGR in Diabetes

We know that pancreatic α-cells (mainly secrete glucagon) and pancreatic β-cells (mainly secrete insulin) are the two main types of islet cells. Both play an important role in the development of diabetes. The imbalance in function between α-cells and β-cells is a major pathological cause of diabetes. Therefore, diabetes is considered to be a class of diseases with dual hormonal imbalance.

It is clearly true that GCGR-based drugs have been widely studied and applied in recent years. In diabetes treatment, multiple blocking strategies against GCGR are being tried, including antisense oligonucleotides, small interfering RNAs, small molecule antagonists, etc. Targeting GCGR has been shown to have better glucose-lowering efficacy in animal experiments and early clinical studies. Currently, according to the International Diabetes Federation (IDF) report, approximately 463 million people in the 20-79 age group worldwide have been diagnosed diabetes in 2019 and it is expected to reach 578.4 million people with diabetes by 2030. Poor blood glucose control can lead to irreversible microvascular and macrovascular complications such as vision loss, blindness, renal insufficiency, peripheral neuropathy, stroke, and amputation. The three main characteristics of diabetes, high incidence, insidiousness, and serious complications, are a serious threat to human health. Currently, more and more pharmaceutical companies are developing drugs targeting GCGR for the treatment of diabetes and other diseases (As shown in the table below).

Data was derived from https://www.pharmacodia.com/

6. What Reagents You May Need for GCGR-Targeted Research?

[2] Ali, Safina, and Daniel J. Drucker. "Benefits and limitations of reducing glucagon action for the treatment of type 2 diabetes. "American Journal of Physiology-Endocrinology and Metabolism 296.3 (2009): E415-E421.