Fig.1 The structure of TNF

Tumor necrosis factor was reported firstly by Lloyd J. Old as one kind of cytotoxic factor produced by macrophages, from Memorial Sloan-Kettering Cancer Center, New York, in 1975. TNF, also known as TNFα, is a cytokine that can directly kill tumor cells without obvious cytotoxicity to normal cells. It is a 17kDa protein consisting of 157 amino acids and a homotrimer in solution. It is produced chiefly by activated macrophages.

TNFα is mainly produced by activated macrophages, T lymphocytes, and natural killer (NK) cells, but is also expressed at lower levels by fibroblasts, smooth muscle cells, and tumor cells. The primary role of TNF is in the regulation of immune cells. TNF, being an endogenous pyrogen, is able to induce fever, apoptotic cell death, cachexia, inflammation and to inhibit tumorigenesis and viral replication and respond to sepsis via IL1 & IL6 producing cells.

In this section, we present the members of TNF superfamily and the receptors in the table 1(table 1a and 1b).

The tumor necrosis factor (TNF) superfamily refers to a superfamily of cytokines that are involved in modulating cell death, survival, proliferation, and differentiation. Nineteen proteins have been identified as part of the TNF family on the basis of sequence, function, and structural similarities (as shown in table 1a).

The portrait of all the receptors in the TNF Superfamily is large and complicated (Table 1b), including the official genome nomenclature site, which introduced the TNFSF and TNFRSF numbering system[1].

A tumor necrosis factor (TNF)-alpha inhibitor is a pharmaceutical drug that suppresses the physiologic response to tumor necrosis factor (TNF), which is part of the inflammatory response. TNF is involved in autoimmune and immune-mediated disorders such as rheumatoid arthritis, ankylosing spondylitis, inflammatory bowel disease, psoriasis, hidradenitis suppurativa and refractory asthma, so TNF inhibitors may be used in their treatment. The inhibitor, including etanercept, infliximab, adalimumab, certolizumab pegol, and golimumab, all bind to the cytokine TNF and inhibit its interaction with the TNF receptors[2].

As a cytokine, TNF is involved with the inflammatory and immune response and can bind to TNF receptor 1 (TNFR1) or TNF receptor 2 (TNFR2). It occurs in numerous forms, both monomeric and trimeric, as well as soluble and transmembrane[3]. Etanercept is a fusion protein of two TNFR2 receptor extracellular domains and the Fc fragment of human IgG1. It inhibits the binding of both TNF-alpha and TNF-beta to cell surface TNFRs. Infliximab is a chimeric monoclonal antibody that includes a murine variable region and constant human region. It binds to the soluble and transmembrane forms of TNF-alpha and inhibits the binding of TNF-alpha to TNFR[4].

TNF can bind two receptors, TNFR1 (TNF receptor type 1) and TNFR2 (TNF receptor type 2) [6]. TNFR1 is expressed in most tissues, and can be fully activated by both the membrane-bound and soluble trimeric forms of TNF, whereas TNFR2 is found typically in cells of the immune system, and respond to the membrane-bound form of the TNF homotrimer. As most information regarding TNF signaling is derived from TNFR1, the role of TNFR2 is likely underestimated. Upon binding, TNF triggers the activation of numerous pathways including the NFκB and MAPK signaling pathway. 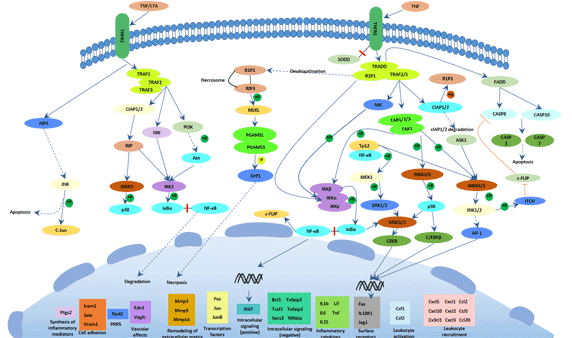 Note: If you want to view all of the pathways offered by CUSABIO, please click here.

Accumulating evidences have revealed that dysregulation of TNF production was implicated in a variety of human diseases including Alzheimer's disease[7], cancer[8], major depression[9], psoriasis[10] and inflammatory bowel disease (IBD). Its complex functions in the immune system include the stimulation of inflammation, cytotoxicity, the regulation of cell adhesion, and the induction of cachexia.

TNF-α is frequently detected in biopsies from human cancer, produced either by epithelial tumor cells, as for instance in ovarian and renal cancer; or stromal cells, as in breast cancer[11]. Cancer cell or stromal cell production of TNF-α is involved in the development of a range of experimental tumors, is partially responsible for NF-κB activation in initiated tumor cells and for the cytokine network in found in human cancer[12].

There are several known consequences of TNF-α production by cancer cells that begin to explain its role in cancer progression. As stated above ovarian cancer cell lines, but not normal ovarian surface epithelial cells, produce pg quantities of TNF-α protein and that there were differences in TNF-α mRNA stability between normal and malignant cells[13]. This endogenous TNF-α correlates with increased cancer cell expression of the chemokine receptor CXCR4 and its ligand CXCL12, in both cell lines and biopsies of disease[14]. TNF-α up-regulated CXCR4 expression, cancer cell migration and production of other inflammatory cytokines and chemokines by the ovarian epithelial cells. CXCR4 and its ligand CXCL12 are implicated in metastases and tumor cell survival in a wide range of cancers[15].

Anti-TNF therapy has shown only modest effects in cancer therapy. Treatment of renal cell carcinoma with infliximab resulted in prolonged disease stabilization in certain patients. Etanercept was tested for treating patients with breast cancer and ovarian cancer showing prolonged disease stabilization in certain patients via downregulation of IL-6 and CCL2. On the other hand, adding infliximab or etanercept to gemcitabine for treating patients with advanced pancreatic cancer was not associated with differences in efficacy when compared with placebo[16].

As TNF plays a key role in the pathogenesis of chronic inflammatory diseases such as Crohn's disease (CD) and rheumatoid arthritis (RA), a new class of drugs has been developed in an attempt to neutralise its biological activities.

The primary cellular elements in the RA inflammatory process that cause synovitis and other systemic manifestations are the CD4+ lymphocyte, macrophage, and synovial fibroblasts. The cells produce numerous cytokines, of which interleukin (IL)–1, IL-6, and TNF are arguably the most important in the RA inflammatory cascade. The important role of TNF-α has also been verified in clinical trials of TNF inhibitors. TNF-α, a homodimer produced primarily by macrophages/monocytes, is an excellent promoter of RA inflammation. Acting through a p55 or p75 receptor, it stimulates other cells to produce various inflammatory cytokines, for example, IL-2, IL-6, IL-8, IL-12, IL-18, and interferon (IFN)–γ[17].

Crohn's disease (CD) is chronic inflammatory conditions characterized by episodes of remission and flare-ups that have a major impact on the patient's physical, emotional and social well-being. Similar to its role in rheumatoid arthritis, TNFα has also been shown to be crucial in the pathogenesis of Crohn's disease.

TNF is a crucial mediator in driving inflammatory processes in the gut. It is produced by a variety of mucosal cells, mainly macrophages and T cells, as a preform on the plasma membrane. In addition, Paneth cells in CD affected segments of the terminal ileum were shown to strongly express TNF RNA in contrast to Paneth cells in normal tissue, indicating an induction under pathogenic conditions. The transmembrane precursor form (mTNF), a homotrimer of 26 kDa subunits, is cleaved by the matrixmetalloproteinase TNF alpha converting enzyme (TACE/Adam17) into a soluble form. The expression of mTNF by CD14+ macrophages has been reported to be relevant in CD)[18].

Anti-tumor necrosis factor α (anti-TNFα) antibodies have been used as a potent therapy for CD. These particular agents are effective not only for CD patients who have never undergone surgery but also for those who have received surgery. In fact, fewer endoscopic recurrences were observed in patients who received anti-TNF agents after surgery than in those who did not.6 In the meanwhile, a report suggested that no significant difference in the endoscopic recurrence rate was observed between biological and conventional therapy after ileocecal resections in CD patients. In this context, the efficacy of anti-TNF agents for postoperative CD patients have been evaluated in patients who had no history of undergoing anti-TNFα antibody treatment prior to surgery. Because primary nonresponses or secondary loss of responses can frequently occur in CD patients who are administered anti-TNF agents, a substantial portion of patients who require anti-TNF agents after surgery receive the agents also prior to surgery in clinical practice[19][20].

[5] N Scheinfeld. A comprehensive review and evaluation of the side effects of the tumor necrosis factor alpha blockers etanercept, infliximab and adalimumab[J]. Journal of Dermatological Treatment, 2004 (15): 280–294