Tumor Necrosis Factor (TNF), also known as TNFα, is a cytokine that can directly kill tumor cells without obvious cytotoxicity to normal cells. It was reported firstly by Lloyd J. Old as one kind of cytotoxic factor produced by macrophages, from Memorial Sloan-Kettering Cancer Center, New York, in 1975. TNFαis a 17kDa protein consisting of 157 amino acids and a homotrimer in solution. It is produced chiefly by activated macrophages, although it can be produced by many other cell types such as CD4+ lymphocytes, NK cells, neutrophils, mast cells, eosinophils, and neurons.

TNFα is mainly produced by activated macrophages, T lymphocytes, and natural killer (NK) cells, but is also expressed at lower levels by fibroblasts, smooth muscle cells, and tumor cells. The primary role of TNF is in the regulation of immune cells. TNF, being an endogenous pyrogen, is able to induce fever, apoptotic cell death, cachexia, inflammation and to inhibit tumorigenesis and viral replication and respond to sepsis via IL1 & IL6 producing cells. 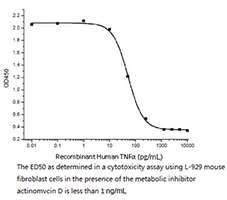 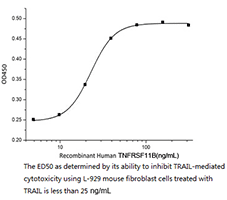 However, generally speaking, when we mention TNF, we often refer TNFα. About the mechanism of TNFα, nowadays it is illustrated clearly. TNFα can bind two receptors, TNFR1 (TNF receptor type 1) and TNFR2 (TNF receptor type 2). TNFR1 is expressed in most tissues, and can be fully activated by both the membrane-bound and soluble trimeric forms of TNF, whereas TNFR2 is found typically in cells of the immune system, and respond to the membrane-bound form of the TNF homotrimer. As most information regarding TNF signaling is derived from TNFR1, the role of TNFR2 is likely underestimated. Upon binding, TNF triggers the activation of numerous pathways including the NFκB and MAPK signaling pathway. You can click here to see the entire picture of TNFα signaling pathway.

Additionally, due to its important role in killing tumor cells, one product of TNFα, known as TNFα inhibitor has applied in clinic. TNFα inhibitor is a pharmaceutical drug that suppresses the physiologic response to TNFα, which is part of the inflammatory response. TNFαis involved in autoimmune and immune-mediated disorders such as rheumatoid arthritis, ankylosing spondylitis, inflammatory bowel disease, psoriasis, hidradenitis suppurativa and refractory asthma, so TNF inhibitors may be used in their treatment. The inhibitor, including etanercept, infliximab, adalimumab, certolizumab pegol, and golimumab, all bind to the cytokine TNF and inhibit its interaction with the TNF receptors.