One World, One Hope——What Can We Do about AIDS?

Human Immunodeficiency Virus (HIV) is a lentivirus that belongs to the class of retroviruses. HIV is a virus that attacks the body's immune system. It takes CD4 T lymphocytes, the most important cells in the human immune system, as the main target of attack, and destroys the cells in large amounts, making the human body lose its immune function. Therefore, the human body is susceptible to various diseases and can develop malignant tumors.

In 1981, the human immunodeficiency virus was first discovered in the United States.

Since the discovery of HIV, the genome and protein of human immunodeficiency virus have been the subject of extensive research [1] [2]. As early as 1985, the sequence of the HIV genome has been reported [3] [4] [5].

The International Classification of Diseases-10 (ICD-10) of acquired immunodeficiency syndrome (AIDS) is B24.x01. Two types of HIV have been identified: HIV-1 and HIV-2. There are differences between HIV type 1 and HIV type 2, and their nucleic acid sequences are only 40% homologous.

"M" means "major", which is the most common type of HIV, with more than 90% of HIV/AIDS cases originating from the M group infected with HIV-1. The M group is further subdivided into branches, called subtypes. See Table 1 for details.

This is an HIV-1 variant that was identified and isolated from a Cameroonian woman who died of AIDS in 1998.

The O ("outsider") group is usually not common in areas outside the western part of Central Africa. According to reports, this is the most common in Cameroon.

In 2009, it was separated from a Cameroonian woman living in France. The scientists who reported the sequence placed it in a proposed group P, "waiting for further human case identification".

The vast majority of people living with HIV live in low - and middle-income countries. Africa has the world's largest number of people living with HIV/AIDS, and southern Africa is even worse. South and Southeast Asia are the second worst affected areas after Sub-Saharan Africa. The development of HIV risk environments [7] has been shaped by social-structural, economic and political factors specific to each context. 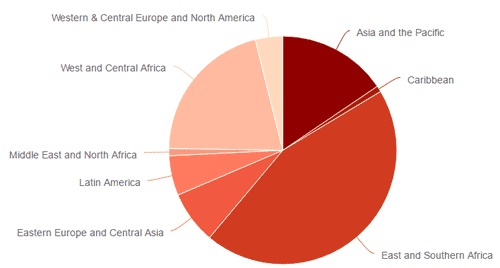 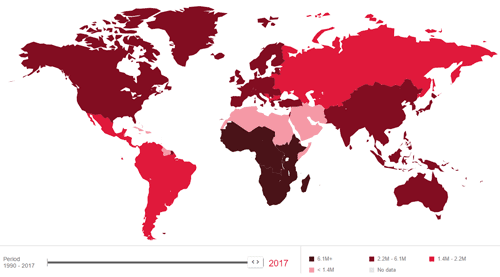 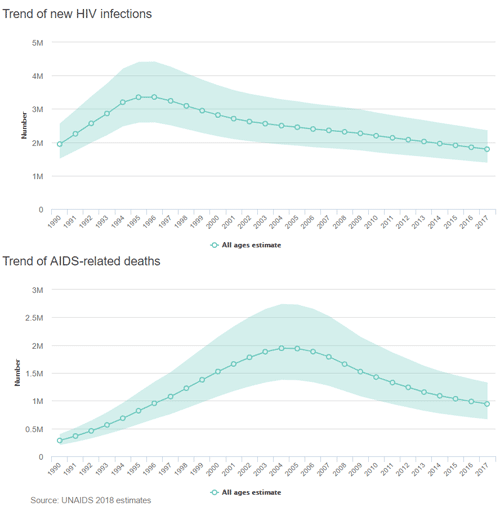 More specific data can be found in the UNAIDS: http://aidsinfo.unaids.org./

At present, this international response to AIDS is unprecedented because resources are more committed than any other health cause [8]. This is called the AIDS exceptionalism.

4.1 The Morphological Structure of HIV

The human immunodeficiency virus is approximately 120 nanometers in diameter and is generally spherical. It mainly includes the viral envelope, and the protein gp120 and gp41 (transmembrane protein). Inward is a spherical matrix formed of protein p17, and a semi-conical capsid formed by protein p24. The capsid contains viral RNA genomes, enzymes (reverse transcriptase, integrase, protease), and other components from host cells (such as tRNAlys3, which acts as a primer for reverse transcription).

Figure 5 The structure of HIV

The viral genome is two identical positive strand RNAs, each of which is about 9.2 -9.8 kb. Both ends are long terminal repeats (LTR), containing cis-regulated sequences that control the expression of provirus. It has been demonstrated that LTR has promoters and enhancers and contains negative regulatory regions. The sequences between LTR encode at least nine proteins, which can be divided into three types: structural proteins, regulatory proteins and auxiliary proteins.

Compared with HIV-1, the HIV-2 gene does not contain the VPU gene, but has an unexplained VPX gene.

HIV-infected persons are the source of infection. HIV has been isolated from blood, semen, vaginal secretions, milk, etc.

The ability of HIV to survive in vitro is extremely poor, it is not resistant to high temperatures. So shaking hands, hugging, kissing, swimming, mosquito bites, sharing cutlery, coughing or sneezing, daily contact, etc. will not spread.

The following are the three main modes of communication [10]:

HIV is present in the semen and vaginal secretions of infected people. Sexual behavior can easily cause minor skin mucosa damage, and the virus can be infected through the damaged area into the blood.

The human body is exposed to blood or blood products containing HIV, intravenous drug use, and transplant tissues and organs of infected patients are at risk of contracting AIDS. 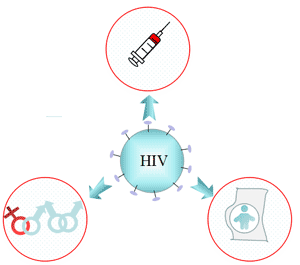 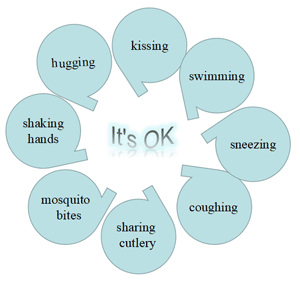 The CD4 molecule on the cell surface is the HIV receptor. After the HIV membrane protein gp120 binds to the CD4 on the cell membrane. The conformation of gp120 changes, causing gp41 to be exposed. Meanwhile, gp120-CD4 binds to the chemokines CXCR4 or CXCR5 on the surface of the target cells to form the cd4-gp120-cxcr4 /CXCR5 tri-molecular complex. Gp41 uses its hydrophobic properties to mediate the fusion of viral cysts and cell membranes. Eventually the cells are destroyed. Over time, HIV destroys so many of these cells that the body cannot fight infection and disease, making people more susceptible to other infections or infection-related cancers.

5.4 The Stage of HIV Infection

Many (but not all) people develop flu-like symptoms within 2 to 4 weeks of infection. HIV symptoms include fever, gland swelling, sore throat, AIDS rash, muscle and joint pain, and headache in this stage.

AIDS is the most severe stage of HIV infection. The immune system of AIDS patients is seriously damaged, and they will suffer from more and more serious diseases, called opportunistic infections. When your CD4 cell count is less than 200 cells per cubic millimeter of blood (200 cells/mm3), you are considered to have developed AIDS. (In populations with a healthy immune system, the number of CD4 cells is between 500 and 1600/mm3).

Primary HIV-related nervous system diseases include Peripheral neuropathy, myelopathy and HIV encephalopathy. As these diseases are related to clinical dementia, they are called AIDS dementia complex (ADC). HIV-associated dementia (HAD) often has low memory, inattention, unresponsiveness, and time and space orientation disorders as initial symptoms, and the disease progresses progressively. Patients with advanced HAD can develop severe dementia [11].

HIV wasting syndrome showed a significant decrease in body weight (> 10%) and chronic diarrhea or weakness. Intermittent or persistent fever is also one of the basis for HIV diagnosis.

HIV antibodies in serum are an indirect indicator of HIV infection. The widely used methods of AIDS test are the fourth generation test, enzyme-linked immunosorbant assay and chemiluminescent immunoassay. The window period of AIDS can be shortened to 14 ~ 21 days [13]. Although HIV antibodies were not detected during the window period, they were contagious. Other test methods include: particle agglutination reagent, Dot-blot assay (a rapid ELISA method.)

There is currently no effective HIV treatment, but with proper medical care, HIV can be controlled. For example, Magic Johnson was diagnosed with the HIV virus in 1991. After years of adherence to treatment, in March 1997, after examination, the doctor determined that Johnson had overcome the virus and fully recovered.

If you are HIV-negative, you have several options to protect yourself from HIV infection. The more you take these actions, the safer you will be.

If you are HIV+, you can take many steps to prevent HIV transmission to HIV-negative partners. 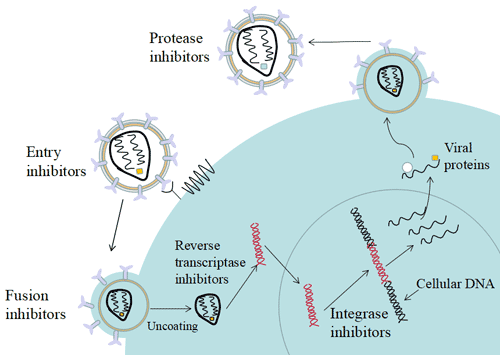 Based on the life cycle of HIV-1 as described above, the anti-aids drugs currently in use or under development mainly include:

At present, the world's hottest and most successful new anti-aids drugs with new mechanism of action mainly focus on the two fields of HIV-1 entry inhibitor and HIV-1 integrase inhibitor [20]. This new anti-AIDS drug has brought new therapeutic hopes to more and more drug-resistant patients [21].

In May 2018, a research team used CRISPR/Cas9 editing technology to develop an effective method to destroy the regulatory genes of HIV and successfully inhibit the proliferation of HIV-1 in infected cells [22].

There are currently no HIV vaccine to prevent or treat HIV infection. However, scientists are working hard to develop. Currently, a vaccine trial called HVTN702, supported by the National Institutes of Health, is testing whether an experimental vaccine program can safely prevent HIV infection among adults in South Africa.