On September 4th, 2020, IMAB and AbbVie jointly announced the establishment of a broad global partnership of the innovative CD47 monoclonal antibody lemzoprlimab (TJC4) independently developed by IMAB. IMAB will receive a total of 1.94 billion US dollars in installments and a double-digit percentage of tiered royalties in future global sales. So far, innovative tumor immunotherapy once again grabbed the attention of publics, but this time it wasn't PD-L1, but CD47. So what is CD47? And why has it become the most potential tumor immune research target after PD-L1? Continuing to read this article, you will find the answer to the above questions.

2. What are The Extracellular Ligands of CD47?

5. The Latest Progress of CD47 Research

CD47, an integrin-related protein that is expressed in all normal and diseased tissues. It was first discovered in stem cells, and then found to have different expression patterns in almost all normal tissues. CD47 belongs to the immunoglobulin superfamily (IgSF), with a single N-terminal extracellular IgV-like domain, a highly hydrophobic stretch with five transmembrane helices, an alternatively spliced cytoplasmic C-terminus ranging in length from 4–34 amino acids (Fig. 1). Four cytoplasmic tails range in length from four amino acids (Type 1) to 34 amino acids (Type 4), but the 16 amino acid tail isoform (Type 2) is the most abundant and is expressed on the majority of cells in humans and mice. Among of them, form 4 is the longest one shown in its entirety [1] [2] [3]. 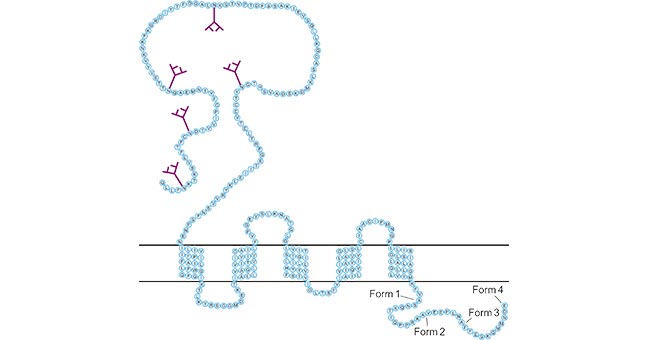 Figure 1. The structure of CD47

Furthermore, an X-ray crystal structure of CD47 shows an IgV (variable) topology with α-helical as well as β-sheet secondary structures and a conserved intramolecular disulfide bridge spanning the middle of the β-sandwich [4]. An additional disulfide bridge also forms between the extracellular domain and one of the transmembrane domains, which is unusual for IgSF proteins. And some evidence suggests it orients the Ig domain for optimal receptor binding [5] [6].

CD47 participates in a series of physiological processes (including cell proliferation, apoptosis, migration, phagocytosis, and innate immune response [7]) by interacting with its corresponding receptors.

2. What are The Extracellular Ligands of CD47?

CD47 interacts primarily with three categories of extracellular receptors: integrins, thrombospondin-1 (TSP-1) protein and SIRPα. TSP1 is an adhesive glycoprotein that inhibits angiogenesis mainly through direct interaction with VEGF. TSP1 binds to CD47 on endothelial cells to inhibit the activation of VEGFR2, thereby destroying the angiogenesis response. However, the role of TSP1-CD47 signaling pathway in human cancer is still uncertain and needs to be explored. In this article, we primarily focus on the SIRPα.

SIRPα, also known as SHPS-1, SIRPA, p84, is also an IgSF, a transmembrane protein and its expression on hematopoietic cells is restricted to myeloid cells: macrophages, monocytes, dendritic cells, and granulocytes (and not T cells, etc.) [8]. As the figure 2 shows, SIRPα contains three immunoglo-bulin (Ig)-like domains in its extracellular region. One N-terminal V-like domain (V, D1 domain) and two C1-like domains (C1, D2, D3 domain)—which is a structure shared by a larger family of SIRPs [9]. The N-terminal IgV domain of SIRPα is responsible for the binding of the extracellular Ig-domain of CD47. One transmembrane helix connects to cytoplasmic tails of varying lengths that govern signaling in the SIRPs. SIRPα’s cytoplasmic tail has four tyrosine residues that conform to an immune-receptor tyrosine-based inhibitory motif (ITIM), which mediates association with SHP-1 and SHP-2 for inhibitory signaling. 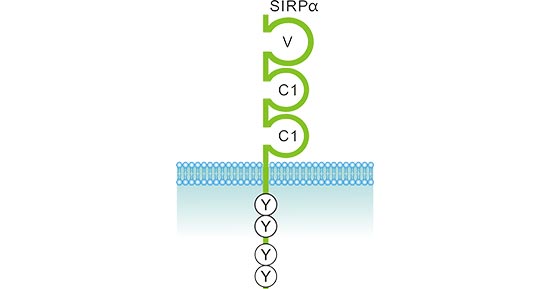 Figure 2. The structure of SIRPα

CD47 is the main ligand for SIRPα across mouse, rat and human (CD47- SIRPα interaction will be introduced detailed in next section). Additionally, SIRPα also interacts with other ligands, such as surfactant proteins (in lung) Sp-A and Sp-D, respectively. Evidences revealed that Sp-D binds SIRPα in D3, rather than D1 [10].

As mentioned before, SIRPα is a transmembrane protein that contains three Ig-like domains (one V-like and two C1-like Ig domains) in its extracellular region and two tyrosine phosphorylation sites in its C-terminal cytoplasmic region. As the Figure 3 shows, the tyrosine-phosphorylated sites of SIRPα bind to the protein tyrosine phosphatases, SHP-1 and SHP-2 and thereby activate these phosphatases. The N-terminal IgV-like domain of SIRPα trans-interacts with the IgV-like domain of CD47. The binding of CD47 to SIRPα promotes the tyrosine phosphorylation of the latter protein. This binding also activates Cdc42, a Rho family small GTP-binding protein, downstream of CD47. In addition, CD47 cis-interacts with integrins through its extracellular region and thereby regulates their function. 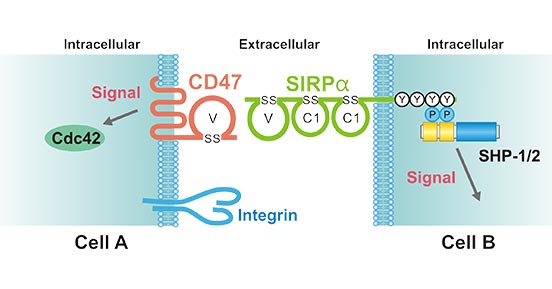 The CD47-SIRPα interaction is a key process to stimulate cell fusion and T cell activation, especially to inhibit macrophages from phagocytosis of target cells. SIRPα is mainly expressed in phagocytes, including macrophages and dendritic cells, and its function is performed by binding protein tyrosine phosphatase SHP2. CD47 binds to SIRPα expressed on macrophages to activate the Src homology 2 domain containing tyrosine phosphatase, inhibit the accumulation of myosin in the phagocytic synapse, and finally produce don't-eat-me. The signal protects tumor cells from phagocytosis and clearance by macrophages. In addition, the interaction between CD47-SIPRα and DC inhibits the maturation of DCs and inhibits the production of cytokines by mature DCs, thereby inhibiting the presentation of tumor antigens to CD8 T cells. Studies have found that in some leukemia cancer cells, they can also escape macrophages through high expression of CD47.

It is based on this major discovery that in recent years, CD47 has been regarded by the industry as the next important target in the field of tumor immunity after PD-1/PD-L1. Although no CD47 monoclonal antibody has been approved for marketing globally, according to incomplete statistics, there are already about 20 companies that are developing products targeting CD47 targets. Not only CD47 monoclonal antibodies, but also CD47 and other targets more than a dozen of bispecific antibodies have entered the stage of clinical research. In this section, we collect the latest development information of clinic drug targeting CD47 that have entered the clinical trial stage.

5. The Latest Progress of CD47 Research