RSPO1: The key factor determining "battle of the sexes " is “favored” in the culture of organoids?

Gender is much more complicated than it seems. There is increasing evidence that gender is not a simple dualism. For years, scientists have believed that female development is the default process, while male development is activated by a gene on the Y chromosome. In 1990, scientists found that a gene called SRY on the Y chromosome could determine the male sex. For example, people who carry the XX chromosome will develop into men if they carry a Y chromosome fragment containing the SRY gene. By 2000 or so, people found that females did not always develop "passively". For instance, WNT4 gene can promote the active development of ovary and inhibit the development of testis. In 2011, researchers showed that a key ovarian gene called RSPO1 could also lead to gonadal developmental abnormalities, such as the development of ovotestis in individuals with sex chromosome XX, a type of gonad with both testicular and ovarian tissue.

This result has overturned the traditional concept that "gender is a simple non-male or female". With the in-depth research by scientists, we have found that there are many kinds of gender besides men and women. Today, we will discuss the RSPO1 gene related to female sex determination.

3. The Roles of RSPO1 in Disease

RSPO1, also known as CRISTIN3, is a member of R-spondins gene family, which encodes a secreted protein with two furan-like domains rich in cysteine residues and one thrombospondin-1 domain[1]. As an activator of the canonical Wnt pathway, RSPO1 is essential for reproductive organ development, epithelial stem cell renewal, and cancer induction and inhibition.

Spondin family is an important Wnt activator discovered in recent years, and it consists of four secreted proteins (RSPO1-4), with the sequence similarity of 40%–60% [2]. The results showed that the binding of Wnt ligand to receptor frizzled protein (Fzd) could activate Wnt signal. Then, low density lipoprotein receptor-related protein 5/6 (LRP 5/6) is phosphorylated, thus promoting the activation of downstream signaling pathway[3]. However, in addition to the receptors such as Fzd and LRP5/6 that are conducive to Wnt signaling, E3 ubiquitin ligases RNF43 (ring finger protein43) and ZNRF3 (zinc and ring finger 3) in combination with Fzd will lead to its ubiquitination degradation, thus weakening the conduction of Wnt signal. As the enhancer of Wnt signal network, RSPO1 exhibited that its FLD region could bind to LGR 4/5 (G-protein-coupled receptors) and then connect the extracellular regions of RNF43 and ZNRF3, so that RNF43 and ZNRF3 on the membrane were endocytosed by the cellular membrane to eliminate their ubiquitination degradation, finally enhancing the conduction of Wnt signal. 3. The Roles of RSPO1 in Disease

Sex reversal syndrome is mainly characterized by the fact that the chromosomal sex of the patient is not consistent with the gonadal sex. 46, XX Male, refers to the individual without Y chromosome but with testicular development. The RSPO1 is the first gene other than SRY (sex-determining region of Y-chromosome) that has been reported to cause complete 46, XX Male by mutations in a single gene.

Oral mucositis often accompanies chemotherapy and radiation therapy in patients with head and neck tumors. Studies have shown that administration of RSPO1 into normal mice triggered nuclear translocation of β-catenin and resulted in increased basal layer cellularity, thickened mucosa, and elevated epithelial cell proliferation in tongue. The oral mucosa has been identified as a target tissue for RSPO1 [6].

Bone loss means that in weightlessness environment, the pressure acting on load-bearing bones such as legs and vertebrae of human body suddenly decreases, muscle movement decreases, stimulation to bones weakens, and blood supply to bones decreases relatively, resulting in decalcification of bones and osteoporosis and other symptoms. Recent studies have shown that RSPO1 is a mechanical force-sensitive protein for bone formation, which can promote the osteogenesis of BMSCs (bone marrow mesenchymal stem cells) under CMS (Cyclic Mechanical Tensile Stress) and alleviate bone loss by activating Wnt/β-catenin signaling pathway. In addition, the evidence suggests that RSPO1/Lgr4 may be a new potential target for the prevention and treatment of disuse osteoporosis in the future [7].

Previous studies have proved that insertion mutation of RSPO1 gene can lead to skin squamous cell carcinoma and seminoma in patients with excessive palmoplantar keratosis [8]. It has also been found that RSPO1 is highly expressed in ovarian cancer and plays an important role in the progression of ovarian cancer and drug resistance by activating the Wnt/β-catenin signaling pathway [9]. In addition, RSPO1 significantly promotes the growth and proliferation of colorectal cancer cells and is related to the invasion and metastasis ability of colorectal cancer [10]. When studying the pathogenesis of invasive ductal carcinoma of the breast, RSPO1 protein has been found to be a potential marker for predicting the onset of invasive ductal carcinoma of the breast, and it can exert its protective effect through the corresponding signaling pathway in the onset of ductal carcinoma [11]. At the same time, in recent studies, it has been observed that RSPO1 expression level has a negative correlation with the incidence scores of hemoglobin, platelets and neutrophils of patients after radiotherapy, which is a potential indicator for predicting the prognosis of patients with advanced cervical cancer. However, the specific mechanism has not yet been clarified.

As a revolutionary disease model, organoid has a wide application prospect in many fields, such as stem cell and development, regenerative medicine, disease research, drug development and precision medicine. The "14th Five-Year Plan" in 2021 listed organoid as the first batch of key special projects. The organoid is so hot that its obtaining method has become the focus of current attention. RSPO1, as an activator of the canonical Wnt signaling pathway, is a key component of organoid culture medium and supports organoid differentiation.

At present, the study on the role of RSPO1 in cancer is still in the initial stage, and most of the studies are still confined to tumor tissues, cells and animal experiments, with limited understanding at the molecular level. Given that Wnt signaling can be used as a target for drug development, continuing to expand the in vivo and in vitro experiments to explore how RSPO1 regulates the activity of classical Wnt signaling and its connection with other regulatory factors will help to further explore the occurrence and development mechanisms of related tumors and provide a richer selection of targets for tumor treatment.

In addition, RSPO1, as an important component of the most classical cytokine culture scheme in organoid culture, its high activity, batch-to-batch stability and no pollution are the key to the success of the organoid experiment, so high-quality cytokines are essential for the culture of organoid!

To assist researchers in scientific research and pharmaceutical companies in their research on the regulation of RSPO1 in body function and the clinical application of RSPO1 in cancer, CUSABIO launched RSPO1 active protein (Code: CSB-MP644834HU1) to support your research into the mechanism of RSPO1 or explore its potential clinical value.

The purity was greater than 95% as determined by SDS-PAGE. (Tris-Glycine gel) Discontinuous SDS-PAGE (reduced) with 5% enrichment gel and 15% separation gel. 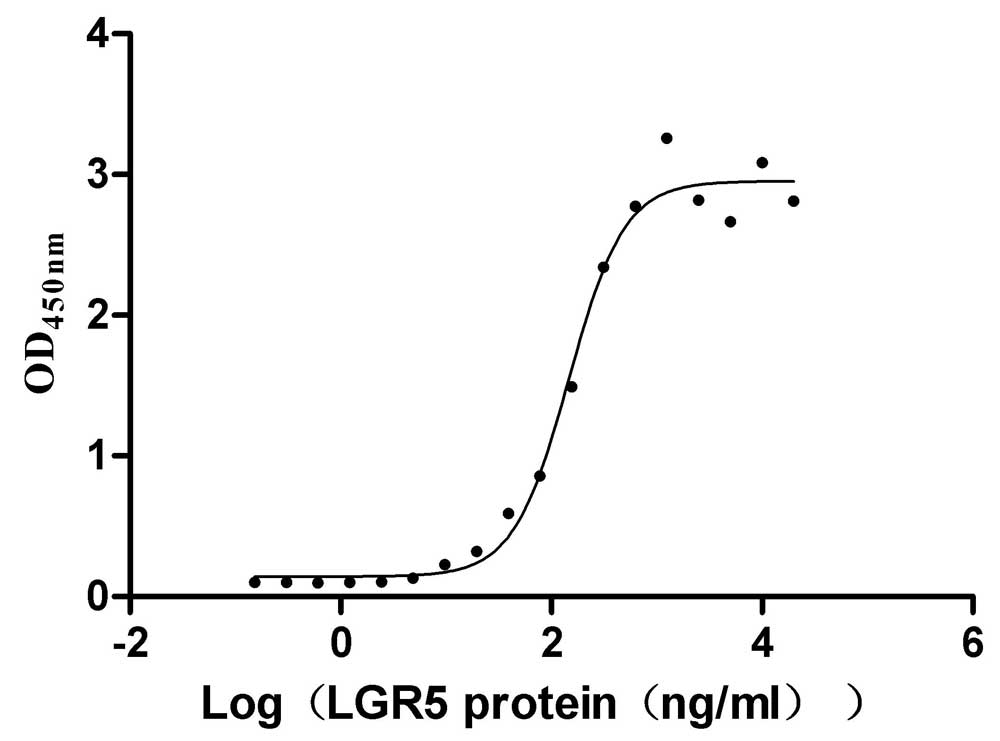