Get An Overview of His-Tag

This article will introduce the definition, advantages as a purification tag, purification mechanism of His-tag, as well as its applications.

2. Why Is His-tag Popular as A Purification Tag?

3. How to Add A His-tag to the Target Protein?

4. How Does His-tagged Protein Purification Work?

The His-tag, also called polyhistidine tag, is one of the simplest and smallest protein tags. It is composed of 6 to 10 consecutive histidine residues in a string and can be placed on the C- or N-terminus of the target protein. It was originally developed for immobilized metal ion affinity chromatography (IMAC)-a rapid and efficient method used for protein purification in 1987 [1][2].


2. Why Is His-tag Popular as A Purification Tag?

Compared with other affinity tags, such as GST, Flag, and Strep, His-tag has distinct characteristics that makes it become the preferred tag for protein purification, as follows:

His-Tag is very small, with a molecular weight of about 0.84 KD. His has an isoelectric point of 7.6 and almost no charge in the commonly used purification buffer system (pH 8.0). Therefore, His-tag has little effect on the structure of fusion protein after purification, which is helpful for downstream assays.

Do not change the characteristics of the target protein

His-tag can chelate with various metal ions, such as Ca2+, Mg2+, Ni2+, and Cu2+, forming stable chelates that are beneficial to protein purification. His-tags' high affinity for immobilized metal ions allows the recombinant proteins to be purified using affinity column chromatography. IMAC is the most commonly used purification method for the His-tagged fusion protein.

IMAC is simple in operation and is mild in purification conditions, and has little effect on the target protein. His-tag enables affinity purification using cheap and widely available nickel or cobalt resins, reducing experimental costs.

The N-terminal His-tag is compatible with the transcriptional and translational mechanism of bacteria, which is conducive to protein expression.

The immunogenicity of the His-tag is relatively low, enabling the preparation for His-tag antibodies by directly immunizing the animal with the His-tag.

A double affinity tag constructed by His-tag with other affinity tags can be applied to a variety of expression systems.

No removal of the His-tag after crystallization

It is not necessary to remove the His-tag after protein purification, and it will not affect the function of the protein.

Choosing to purify the target protein under native or denaturing conditions is dependent on protein location and solubility, the accessibility of the His-tag, and the desired downstream application.

Although His-tag has many advantages, it is not flawless. The His-tag has low specificity, and the purity of the His-tagged recombinant proteins is relatively low. And microbial hosts naturally express metal-binding proteins that may co-purify with the protein of interest. Some findings have found that His-tag possesses catalytic properties, which are indeed not negligible.


3. How to Add A His-tag to the Target Protein?

The His-tag is introduced by inserting the DNA fragment encoding a protein of interest in a vector that has the tag ready to fuse at the C-terminus. The forming recombinant plasmid is subsequently transferred or transformed into an expression system.

Express the tagged protein in bacterial, mammalian, or insect cells depending on the promoter employed. Alternatively, protein expression can be carried out using cell-free expression systems. The result is the expression of a recombinant protein with a 6*His or poly-His-tag fused to its C-terminus.

Alternatively, the His-tag is added using primers containing the tag, after a PCR reaction the tag gets fused to the N-terminus of the gene of interest. 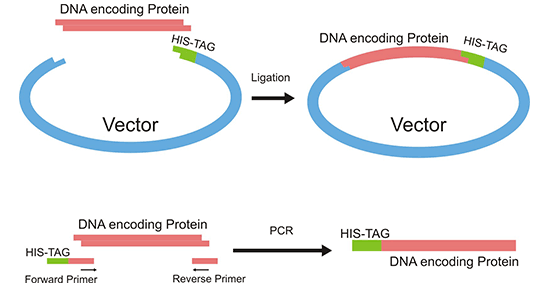 Figure 1. Addition of His-tag to a protein

This picture is cited from Wikipedia


4. How Does His-tagged Protein Purification Work?

IMAC is frequently used to purify His-tagged proteins. IMAC is based on the interaction of histidine residues with divalent metal ions immobilized on resins. This purification method is quick, inexpensive, and straightforward, which has led to widespread adoption.

In the IMAC technique, transition metal ions like Ca2+, Mg2+, Ni2+, and Co2+ are immobilized on a resin matrix using a chelating agent such as nitrilotriacetic acid (NTA). Ni2+ is the most commonly used metal ion.

The histidine residue has an imidazole group, which can chelate with the transition metal ions. Therefore, proteins with His-tag can be selectively attached to the IMAC media at a neutral to slightly basic pH (pH 7.5-8), while other impurity proteins cannot bind or can only bind weakly [4]. Non-specifically bound proteins are washed away with an appropriate washing buffer, which should already contain a low molarity of imidazole.

It is worth noting that the binding affinity between those two interaction partners is proportional to the length of the His-tag. The binding affinity of 10*His-tags is ten times higher than that of 6*His-tags [4][5]. However, it is suggested to reduce the number of histidine residues as a first test to prevent potential protein function disruptions [6].

The His-tagged proteins bound to the media can be eluted by lowering the pH to 4–6, stripping the metal from the polymeric support with high concentrations of ethylenediaminetetraacetic acid (EDTA) or, most commonly, by competition with imidazole (100-250 mM). 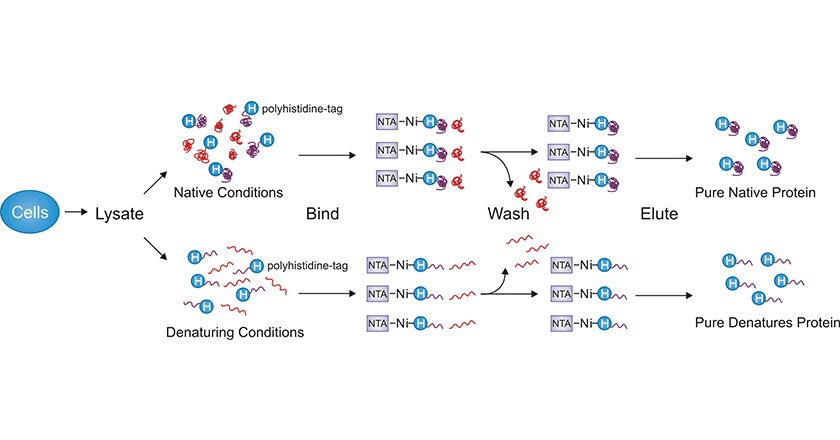 It often does not require removal before the use of the recombinant protein. While the tag can be removed by introducing a protease cleavage site, there are many examples of proteins that have been crystallized with intact His-tags and little or no impact on the structure of the tagged protein [3].

Additionally, the affinity of the His-tag for divalent metal cations is not dependent on a specific protein conformation, enabling the IMAC to be performed under denaturing conditions (e.g. 6 mol/l guanidine hydrochloride or 8 mol/l urea). This is useful when the target protein can not be expressed in a soluble form and refolding is being pursued.

The His-tag works well to rapidly purify proteins expressed in E. coli, but for proteins expressed in mammalian or insect cells, the greater number of histidine residues means there is higher background binding. Therefore, to increase protein purity, the metal resins that bind His-tagged proteins need to be stringently washed. In addition, denaturing agents like 8M urea or 6M guanidine HCl can be used with His-tagged membrane or insoluble proteins to improve purification.

His-tags have different applications in addition to their metal--coordinating properties used for protein purification.


Since His-tag is available, the qualitative and quantitative expression of recombinant protein can be detected by WB, ELISA, and other methods. CUSABIO can provide several His-tag antibodies for relevant research.