What Should You Know about Exosomes?

The exosomes are vesicles secreted by the living cells to the extracellular space, with a diameter of 30-150 nm and a density of 1.13-1.19 g/mL. Almost all types of cells in the human body produce exosomes, which are nearly 1000-10000 per human cell. They have a typical lipid bilayer membrane structure and are present in various biological fluids, including cell culture supernatant, plasma, serum, saliva, urine, amniotic fluid, malignant ascites and other biological fluids. In this article, we collect several topics about exosomes as following:

2. Do You Know How Exosomes are Generated?

3. What is The Biological Function of Exosomes?

5. How to Isolate Exosomes?

In 1986, Eberhard G.Trams and R.M,Johnstone first discovered a small vesicle with a membrane structure in the culture supernatant of red blood cells of sheep in vitro, and named it exosomes. In the following 10 years, exosomes did not obtain enough attention. However, in 1996, Rapose et al. reported on the function of EVs, clarifying that B lymphocytes induce antigen-specific MHC class II-restricted T-cell responses by releasing exosomes containing type II major histocompatibility complex (MHC) II. It is the first major breakthrough in the field of exosomes.

Since then, the researchers have become extremely curious about the exosomes. In 2007, Jan Lotvall and others created the second breakthrough in exosome research, namely the variable RNA and miRNA contained in the exosomes, and non-coding long RNAs and mRNAs can be transported between cells. In 2010, three research groups demonstrated that these miRNAs can be transferred to standby cells and function in cells.

The third breakthrough is that the 2013 Nobel Prize in Physiology or Medicine was awarded to American scientists James E. Rothman and Randy W. Schekman, and German scientist Thomas C. Sudhof. They discovered that the regulation mechanism of intracellular vesicle transport has brought the research of exosomes to a new height and become hot research in the field of biomedicine in recent years[1][2].

2. Do You Know How Exosomes are Generated?

The formation of exosomes is a continuous process. First of all, extracellular substances or cell membrane proteins form early endosomes via endocytosis, and mature into late endosomes through intracellular transport gradually. Under certain physiological or pathological conditions, the boundary membrane of late endosomes are recessed inward to form multi-vesicle bodies (MVBs). More than 20 vesicle sorting proteins are involved in the formation of MVBs. The most important of them are four endosomal sorting complex required for transport (ESCRT) and vacuolar protein soaing 4 (Vps4). MVBs can be fused with lysosomes, and the contents are excluded from the cells by lysosomal degradation. The intraluminal vesicles (ILVs), can also be fused directly with the cell membrane in the form of internal budding, which can be shedded with the help of ESCRT III contraction and shearing bud neck, and released into the extracellular environment to form the exocrine body[3]. As shown in Fig. 1. Fig.1. ILVs are generated by invagination of the endosomal membrane and have three possible fates

The exosomes released to the interstitial cells will enter the recipient cells again through endocytosis or ligand-receptor recognition pattern, and release the "cargo" into the receptor cytoplasm to exert signal transduction effects. They can also renew MVBs or directly fusion with the cytoplasmic membrane for the next cycle[4]. As shown in Fig.2. 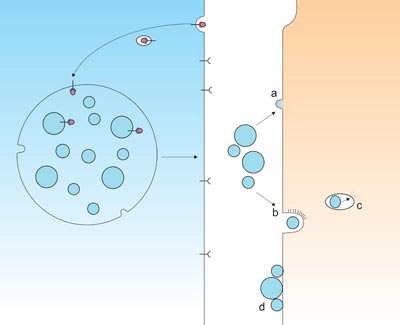 3. What is the Characteristics and Biological Function of Exosomes? Fig.3. The structure of exosome

The outer membrane of exosome is abundant of cholesterol, sphingolipids, ceramides, glycolipids GM3 and long-saturated fatty acid-based glycerophospholipid chains, which play an important role in the cellular microenvironment. It is widely distributed in various body fluids. Similar conserved proteins such as MHC I, heat shock protein, four trans-membrane protein (CD9, CD63, CD81, Alix, Tsg 101), integrin, cytoskeleton protein and some biological different cells[5][6][7]. These proteins are also called exosomes markers.The exosomes contain biological information, such as cholesterol, protein, and mRNA. These substances not only reflect the type of cells from which they are derived, but more importantly, they are also closely related to the physiological functions or pathological changes of the cells from which they are derived.

Exosomes derived from different cells have different functions in different physiological and pathological stages. Currently known exosomes function includes the following two aspects. As far as mother cells are concerned, the main role is quality control, selective release of harmful substances in the cells, maintenance of intracellular homeostasis and cell viability. For receptor cells, as a transmitter of mutiple signals, exosomes mediate cell-cell information exchange, which can affect neighboring cells closely or regulate them systematically over long distances.

Exosomes carry proteins, miRNAs, lncRNAs, circRNAs, mRNAs and their degradation fragments involved in intracellular signal transduction, which are involved in the important regulation of cell activities. Besides that, emerging evidence found that exosomes play role in immune regulation mechanisms, disease development, Alzheimer's disease, tumor metastasis, as a front-line diagnostic marker for the treatment of intractable diseases such as immune diseases.

The reciprocal interactions of cancer cells with their microenvironment constitute an inevitable aspect of tumor development, progression and response to treatment in all cancers. Such bilateral transactions also serve as the key scenario underlying the development of drug resistance in many cases finally determining the fate of the disease and survival. Exosomes, also known as a class of extracellular vesicles (EV), have been shown in the past few years to be important mediators of local and remote cell-to-cell contact changing the activity of their target cells by introducing their content of proteins, non-coding RNAs, and membrane-associated small molecules[8].

Recently, a larger amount of evidence showed that exosomes have a crucial function in cancer. For instance, Zheng R's team has demonstrated that exosomes derived from normal cells reduce the progression of BC both in vitro and in vivo via transferring PTENP1 to bladder cancer (BC) cells. The result suggested that exosomal PTENP1 participates in normal-cell-to-bladder-cell communication during the carcinogenesis of BC. And exosomal PTENP1 is a promising novel biomarker that can be used for the clinical detection of BC[9]. Besides bladder cancer, Santos JC, et al. found that exosome mediate breast cancer chemoresistance via transferring miR-155[10]. Moreover, in triple-negative breast cancer cells, it lacks effective translational regulation of PLD expression and exosome biogenesis[11].

In addition, exosomes also have a key role in other cancers, such as pancreatic cancer, prostatic carcinoma, gastric cancer, and so on[12][13][14].

Alzheimer’s disease (AD) is characterized by alteration of synaptic transmission, cognitive decline, and neuronal death brought on through accumulation of neurofibrillary tangles in neurons and amyloid beta (Aβ) in the brain parenchyma. Currently, there is no viable therapy to slow or reverse AD progression. Lately, there are several researches which indicated the relation between AD and exosomes[15][16]. Perez-Gonzalez et al. have reported that Aβ processing is associated with endosomal compartments with a fraction of Aβ and C-terminal fragments being secreted in association with exosomes[17]. Moreover, up-regulated exosome secretion in AD also has been demonstrated via that primary astrocytes secrete exosomes in response to Ab exposure, a process dependent upon ceramide generation by neutral sphingomyelinase 2 (nSMase2)[18]. And exosomes have been alluded in the extracellular enzymatic degradation of Aβ[19]. If you want to know more detail, please click here or leave a message to us.

Exosomes and Other Diseases

Apart from these two kinds of diseases, accumulating evidence has revealed its role in other diseases.

Ying W, et al., researchers of the Department of Endocrinology Metabolism Medicine at the UC San Diego, have discovered that adipose tissue macrophage-derived exosomal miRNAs can modulate in vivo and in vitro insulin sensitivity. These miRNAs can be transferred to insulin target cell types by mechanisms of paracrine or endocrine regulation with robust effects on cellular insulin action, in vivo insulin sensitivity, and overall glucose homeostasis[20]. Dr. Jerrold Olefsky, correspondence author of this paper said: "When exosomes migrate between tissues, the responses what they induce may be one major cause of the intercellular communication that leads to metabolic disorders in diabetes. By fluorescently labeling cells, we were able to observe that exosomes and the microRNAs (miRNAs) they carry from the adipose tissue through the blood, into the muscle and liver tissues."

In addition, Li Y, et al. researchers of the School of Stomatology at Capital Medical University, Beijing, China, have an animal study which demonstrated that ectopic expression of ssc-mir-133b resulted in failed tooth formation after 12 weeks of subcutaneous transplantation in nude mice. The tooth germ developed abnormally without the indispensable exosomal signals from the mandible[21].

5. How to isolate exosomes?

As mentioned in the part of Exosomes and Disease, exosomes play a key role in immune regulation mechanisms, disease development, Alzheimer's disease, tumor metastasis. For this reason, one treatment method named exosomes therapy has emerged. If this technology wants to develop, obtained a large amount exosomes with high quality is an urgent problem to be solved. Here, we collect several conventional methods of exosomes isolation, and the development of exosomes isolation kits are based on these methods.

The super-dissociation method is popular because of the simple operation, and the number of vesicles obtained is large. But the process is relatively time-consuming, and the recovery rate is unstable. It may be related to the type of rotor. Moreover, the purity of obtained exosomes is also questioned. In addition, vesicles will be damaged for centrifuging repeatedly, thereby reducing their quality.

Chromatography is a method of analyzing the separation of solutes based on the relative relationship between the pore size of the pores of the gel and the size of the sample. Large molecules in the sample cannot enter the gel pores, and can only pass through the column between the porous gel particles, and are first eluted by the mobile phase. Small molecules can enter most of the pores in the gel, and are more affected in the column. Strongly retained and eluted more slowly. The separated exosomes are uniform in size under the electron microscope, but require special equipment and are not widely used.

Magnetic bead immunoassay, also known as antibody affinity, is a method in which a magnetic bead coated with an anti-marker antibody is incubated with an exosomal vesicle to adsorb and separate the exosomes.

The magnetic bead method has the advantages of high specificity, simple operation, and no influence on the morphological integrity of the exosomes, but the efficiency is low, and the biological activity of the exosomes is easily affected by pH and salt concentration, which is not conducive to downstream experiments and is difficult to be widely popularized.

Polyethylene glycol (PEG) is a commonly used polymer, which can be co-precipitated with hydrophobic proteins and lipid molecules. It was previously used to collect viruses from samples such as serum and is now used for precipitation. The principle of exosomes may be related to competitive binding to free water molecules.

Compared with ultracentrifugation (the most common used method), the process is relatively efficient, and the recovery rate is better. But, this two methods have the same obstacle about the purity of obtained exosomes. This question also is the largest difficulty in the progression of exosomes research. We remain have a long way to go to achieve exosomal treatment.

There is another method to get exosomes: CUSABIO Exosome Isolation Kits.