Cross-reactivity of Antibody: Beneficial or Harmful?

In this article, we will focus on the definition, causes, biological significance, applications, and prevention of cross-reactivity.

2. The Association and Difference between Cross-Reactivity and Specificity

3. The Biological Significance of Cross-reactivity

5. How Can Cross-reactivity Be Avoided or Decreased?

Epitope and paratope have to be mentioned before talking about the cross-reactivity.

An epitope is a specific sequence of amino acids (only 5-6 amino acids long) lying on the surface of an antigen and is recognized by the corresponding antibody. The epitope is also called an antigenic determinant. Some antigens have only one epitope, while others have two or more different epitopes.

A paratope is a three-dimensional structure formed by the complementary binding of the tip part of variable regions (light and heavy chains) of the antibody. It contains 5-10 amino acids and specifically recognizes and binds to the epitope of an antigen. Each arm of the Y-shaped antibody has an identical paratope at the N-terminal end. As such, antibody-antigen binding is actually the paratope-epitope interaction. 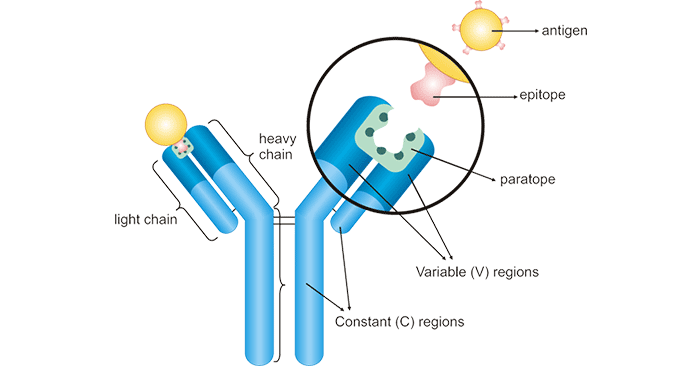 An antibody reacts with antigens other than the antigen that stimulated it. This phenomenon is called cross-reaction. Cross-reaction occurs due to the shared epitope on multivalent antigens or conformational similarity of epitopes. 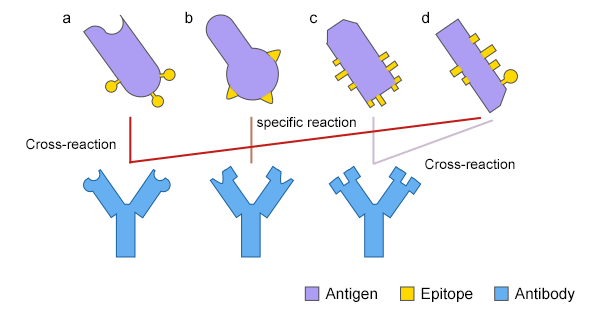 Figure 2: The cross-reaction of an antibody between two different antigens

Cross-reactivity is commonly defined as the capacity of a single antibody to recognize the same or structurally similar epitopes on different antigens in immunology.

2. The Association and Difference between Cross-Reactivity and Specificity

In immunology, specificity refers to the ability of paratopes on an antibody to recognize and interact with only a single epitope on the corresponding antigen. It should be noted that this unique epitope may be present on more than one antigen. The specificity is determined by the types, arrangement order, and spatial configuration of epitope(s) on the antigen. The specificity enables to precisely detect a target antigen thus avoiding measurement of impostor antigens. It is the most prominent feature of immune response and is the basic basis for the prevention and diagnosis in immunology.

Cross-reactivity refers to a situation in which an antibody recognizes and binds to two or more antigens that are highly homologous or possess the same epitope. In immunoassays, cross-reactivity of antibody (polyclonal antibody) enhances the sensitivity of the result and allows for the detection of antigens with low abundance.

3. The Biological Significance of Cross-reactivity

Besides, cross-reactivity can interfere with the results of immunoassays and affect reproducibility. A cross-reaction may lead to a false positive interference in drugs of abuse screening tests because the antibody reacts to another compound possessing a chemical structure similar to the targeted drug [5] [6].

Cross-reactivity can improve the utility of an antibody. For example, the cross-reactivity of an antibody enables it to detect the homologous proteins in multiple model organisms. Many human antigen-derived antibodies show significant cross-reactivity with the homologous proteins in non-human organisms, such as mouse, rat, and rabbit. The cross-reaction across different species can be used to explain certain immunopathological phenomena, diagnose certain infectious diseases, or induce immune responses against antigens that are difficult to prepare. Cross reaction can confirm that whether the ELISA kit is specific for detecting a certain protein of interest.

In clinical diagnosis, heterophile antibody tests are used to rapidly detect antibodies generated against the Epstein-Barr virus (EBV), the causative agent of infectious mononucleosis [7]. These tests make use of the cross-reactivity of antibodies. Cross-reactivity has been frequently used as an evaluated parameter for the validation of immune and protein binding-based assays such as ELISA and RIA.

5. How Can Cross-reactivity Be Avoided or Decreased?

Testing the cross-reactivity of antibodies with closely related antigens is an important validation test. Choosing appropriate antibodies is the most direct solution to avoid cross-reactivity in immunoassays. It is recommended that mAb is used as a primary antibody (e.g. for capture) to establish high assay specificity, and that pAb should be used as a detection antibody for higher sensitivity.

Since antibodies are being developed to treat a wide range of diseases including cancer, a fuller understanding of cross-reactivity is particularly important.

How to choose an antibody for scientific research?

The meaning of irregular antibody screening