The Overview of Hippo Signaling Pathway

1. What is Hippo Signaling Pathway?

The Hippo signaling pathway, also known as the Salvador/Warts/Hippo (SWH) pathway, consists of a group of conserved kinases and controls organ size through the regulation of cell proliferation and apoptosis in animals. The Hippo signaling pathway can inhibit cell growth. The name of the pathway is derived from one of its key signaling components-the protein kinase Hippo (Hpo) in fruit fly. Tissue overgrowth is the major cause for mutations in this gene. In this review, we Primary introduce the mammals’ Hippo signaling pathway. In mammals, the membrane protein receptor, located in upstream of the Hippo signaling pathway, senses the extracellular environmental growth-inhibitory signal and then acts on the downstream effectors YAP and TAZ after kinase cascade phosphorylation reactions.

2. The Members of Hippo Signaling Pathway

The Hippo signaling pathway is highly conserved through evolution. All core components of the Hippo pathway that identified in the Drosophila have direct orthologs in mammals(Table 1)[1].

a. The Function of Hippo Signaling Pathway in Organ Size Control

The Hippo pathway was initially thought to limit organ size by inhibiting proliferation and promoting apoptosis. A kinase cascade is a core of the Hippo signaling pathway. Mst1/2 (ortholog of Drosophila Hippo) kinases and SAV1 form a complex to phosphorylate LATS1/2. Activated LATS1/2 kinases in turn phosphorylate and inhibit the transcription co-activators YAP and TAZ, which are two major downstream effectors of the Hippo pathway. On the contrary, dephosphorylated YAP/TAZ translocate into the nucleus and interact with TEAD1-4 and other transcription factors to induce expression of genes that promote cell proliferation and inhibit apoptosis. Functions of the Hippo pathway in organ size determination have been confirmed in mouse models. For example, liver-specific overexpression of YAP leads to enlarged livers that return to their normal size after cessation of YAP expression[5][6].

b. The Function of Hippo Signaling Pathway in Osteoclast Formation

4. YAP and TAZ: a Nexus for Hippo Signaling and Others

Yes-associated protein (YAP)/transcriptional coactivator with a PDZ-binding domain (TAZ) is the prime mediators of the Hippo signaling pathway and has a direct orthologs in Drosophila, Yorkie. The Hippo kinase cascade is the primary regulator of YAP/TAZ by phosphorylating YAP/TAZ and inhibiting their nuclear activities[14]. Considerable research data indicate that YAP/TAZ, the key regulator of the Hippo signaling pathway, as a nexus and integrator for multiple prominent pathways and signaling organelles that play key roles in the control of cell fate and tissue regeneration, such as Wnt, G protein-coupled receptor (GPCR), epidermal growth factor (EGF), bone morphogenetic protein (BMP)/transforming growth factor beta (TGFβ), and Notch pathways. Here, I have organized several pathways that are currently well-studied.

a. YAP/TAZ and Wnt signaling β-catenin as a regulator, plays a key role in mediating Wnt signaling pathway. Cytoplasmic YAP/TAZ detain β-catenin and in some cases recruit β-TrCP to the destruction complex[15][16]. This change leads to nuclear β-catenin downregulation and then inhibits Wnt signaling. Cytoplasmic YAP and TAZ also negatively regulate Wnt signaling by detaining β-catenin and disheveled (DVL)[17]. The tyrosine phosphatase SHP2, as well as YAP and TAZ, shuttles between the nucleus and the cytoplasm. When it is located in nuclear, it promotes β-catenin-dependent transcription[18][19]. SHP2 is translocated in cytoplasm by interaction with phosphorylated YAP and TAZ. YAP and TAZ control nuclear and cytoplasmic localization of SHP2 and its function.

b. TGFβ and BMP signaling 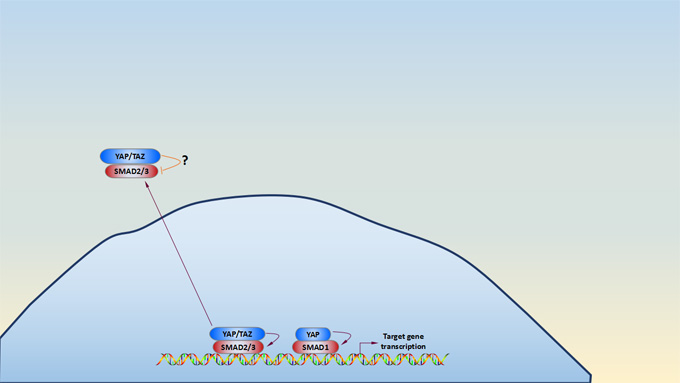 Accumulating evidence shows that YAP and TAZ utilizes some transcription factors (TFs), and some contextual transcriptional responses which are mediated by additional TFs such as TEADs, SMADs, p63, RUNX, and PAX, which diversifies the transcriptional output of the Hippo pathway[20][21][22]. Phosphorylation and activation of SMAD is induced by TGFβ/BMP binding to its serine-threonine kinase receptor[23][24]. As shown in the picture of Hippo signaling pathway, cytoplasmic YAP and TAZ sequester SMAD2/3 in the cytoplasm and then inhibit SMAD2/3-mediated signaling, but these mechanisms seem not to be widespread and somewhat controversial[25]. Nuclear YAP activates SMAD1-mediated transcription. Once TGFβ signal activation, nuclear YAP/TAZ and SMAD2/3 form a complex, and TEA domain family (TEAD) transcription factors, coordinating a protumorigenic transcriptional program. YAP and TAZ also directly promote transcription of several receptors and ligands to mediate endocrine and paracrine signal crosstalk and potential feedback loops[26][27].

a. Hippo Signaling Pathway and Cancer

Cancer is a group of diseases involving abnormal cell growth with the potential to invade or spread to other multiple body regions. Although the Hippo pathway was first discovered for its pivotal role in restricting imaginal disc growth by promoting cell-cycle exit and apoptosis, more recent studies in animal models have expanded the function of this pathway into other developmental contexts, such as papillary kidney cancers[28], colorectal cancer[29], ovarian cancer[30], breast cancer[31], and gastric cancer[32]. Carole Sourbier’s study revealed that targeted inhibition of Yes in YAP-activated tumors with dasatinib may present a therapeutic potential for patients with NF2-deficient PRCC tumors that have lost regulation by the Hippo signaling pathway[28]. Xu Wang’s research suggested that TFAP2C promotes CSCs characteristics and chemoresistance via transcriptionally activating negative regulators of Hippo signaling, ROCK1 and ROCK2, resulting in inactivation of Hippo signaling in colorectal cancer (CRC) cells[29]. The YAP/TAZ-TEAD transcription factor complex represents a universal target of oncogenic transformation. Up-regulation of the YAP gene locus has been reported at varying frequencies in a wide spectrum of human and murine tumors, such as medulloblastomas, carcinomas of the lung, pancreas, esophagus, liver, and mammary gland[33].

Heart disease still is the main risk of death in both developed and developing countries. Heart malformation could lead to embryonic or postnatal death, and strenuous stimulations like pressure overload and/or ischemia could cause irreversible damage. Emerging evidences shows that the Hippo signaling pathway participates in cardiovascular development, hypertrophy, apoptosis, autophagy, angiogenesis, and regeneration[34][35][36][37][38].

In this article, we introduce the relationship of the Hippo signaling pathway and other pathway and disease in brief, respectively. If you have any questions, you can leave a massage by clicking the “Contact Us” button in the bottom.