A Switch that Controls the Entry and Exit of Ions

Ion channels are pore-forming proteins. It is a passive transport pathway for various inorganic ions across the membrane and an important way for living cells to carry out metabolic activities and material exchange. Ion channels regulate the entry and exit of corresponding substances through the opening and closing of ion channels, which is of great significance for the realization of various functions of cells. Almost all cellular processes depend on ion channels. 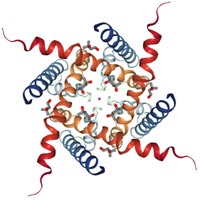 3. The Function of Ion Channels

4. The Function of Ion Channels

6. The Role of Ion Channels in Development

In 1990, American scholar Fontaine et al. first reported that there might be genetic mutations in voltage-dependent sodium channel alpha subunits in skeletal muscle membranes of patients with hyperkalemic periodic paralysis (Hypp), which initiated the research on ion channel disease.

These studies have greatly improved the understanding of the structural basis behind the ion channel function.

According to different classification standards, they can be divided into different types:

According to the selectivity of the channel to the ion type, it can be divided into two categories, namely the cation channel and the anion channel. This is closely related to the charge of the amino acid residues at the entrance and exit of each subunit unit.

The opening and closing of ion channels is called gating. According to the different gating mechanisms, ion channels can be divided into four categories:

Voltage gated ion channels, also known as voltage dependent or voltage-sensitive ion channels, are gated and closed by sensing changes in membrane potential. There are four main types of ion channels: K+, Na+, Ca2+ and Cl- channels [5]. This electrical activity is important for many processes in electrically excited cells such as neurons and muscles as well as in non-excited cells. 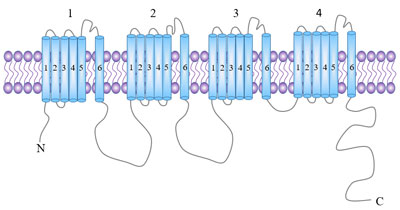 Structure: NAchR is one of the more clearly studied of these receptors. NAchR is a 5-molecule protein that is composed of 5 highly homologous subunits, including 2 alpha subunits, 1 beta subunit, 1 gamma subunit and 1 delta subunit, with ion channels in the middle. The binding site of this receptor is on two alpha subunits, which are located outside the membrane and have glycosylated sites.

The ion channel is regulated by the ion concentration of intracellular cGMP, cAMP. 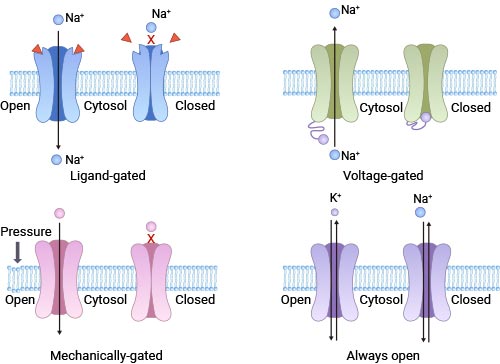 3. The Function of Ion Channels

Ion channel is an important channel for cell metabolism and also an important component for maintaining the life activities of the body.

Definition: When a gene encoding an ion channel subunit is mutated/expressed abnormally or a pathological endogenous substance is present in the body, the function of the channel is weakened or enhanced to varying degrees, resulting in disorder of the overall physiological function of the body.

Most channelopathy are not new, but previously we have not found that they have lesions at the ion channel level, such as myasthenia gravis, migraines, seizures, and so on [14][15].

A large number of studies have found that some endogenous pathogenic substances (such as β-amyloid, β-amyloid precursor, presenilin-1, 2) may be present in patients with Alzheimer's disease (AD).It affects the structure and/or regulation process of potassium channel and calcium channel, and participates in the early memory loss and cognitive function decline of AD patients.

The pathogenic factors of bronchial asthma act on the calcium channels on the cell membrane of mast cells, causing the opening of calcium ion channels, which activate the downstream signaling pathways through calcium ions, and ultimately lead to the release of histamine, leading to inflammatory reactions and asthma attacks.

The structure and function of cellular ion channels are the basis of life-sustaining processes, and their genetic variation and dysfunction are related to the occurrence and development of many diseases, mainly involving the nervous system, muscles, heart, kidney and other systems and organs.

The ion channel disease, which is well studied, mainly involves the fields of K+, Na+, Ca2+ and Cl- channels.

Calcium channels are involved in physiological processes of the nervous, muscular, secretory and reproductive systems.

Ion channel is an important regulator of apoptosis. Both ion channels and apoptosis dysfunction are associated with the occurrence, progression and chemotherapy resistance of tumors [16]. Many pathological conditions, including cancer, viral infections and autoimmune diseases, are characterized by apoptotic damage, while other diseases, such as AIDS (acquired immune deficiency syndrome), osteoporosis and neurodegenerative diseases, have increased apoptotic rates.

Studies have shown that potassium and calcium channels are involved in tumor angiogenesis, and sodium and chloride channels regulate tumor invasion and metastasis.

6. The Role of Ion Channels in Development

Mutations in calcium channels or potassium (K+) channels can increase the incidence of craniofacial and limb defects [17].The same thing happens to fetuses [18].In addition, the destruction of the function of ion channels will also affect the morphogenesis of fish, frogs, mammals and flies. These results show that ion channels play a conservative role in the development process [19] [20].

Studies have shown that ion channel expression disorders are associated with neurological, cardiovascular, immune disease and cancer pathogenesis. With the research on the structure and function of ion channels, ion channels have become an important target for drug design. Currently, ion channels (including ligand-gated ion channels) are the second largest target for existing drugs, second only to G-protein coupled receptors [21].

Drugs that block Na+ channel can be used in a wide range of membrane hyperexcitatory disorders, including arrhythmia, epilepsy, troponin and chronic pain.

Drugs and toxins can be divided into 4 types depending on the different effect on Na+ channel.

Drugs that block calcium channels can be used as antihypertensive and antiarrhythmic drugs, and are also widely used to treat ischemic epilepsy.

According to the effect of drugs on Ca2+ channels, they can be divided into: