p53 is a tumor suppressor gene that is involved in the development of most cancers in humans. The p53 protein is extremely important for inhibiting the development of cancer. Studies have shown that in addition to tumor suppressor function, p53 is also involved in a variety of physiological processes such as apoptosis, DNA damage repair, regulation of body metabolism, and senescence. Recent studies have found that p53 is also involved in the regulation of antiviral immune responses in the body.

1. The Characteristics of p53

4. The Relationship between p53 and Related Genes

5. The Anticancer Mechanism of p53 Gene

1. The Characteristics of p53

Tumorigenesis is a multi-gene, multi-stage process. A large number of studies in recent years have shown that p53 missense mutation or allele deletion has a high incidence in many tumors [1]. According to statistics, in all malignant tumors, the mutation probability of this gene is more than 50%. Currently, p53 gene has the highest correlation with liver cancer, breast cancer, ovarian cancer, brain tumor, gastric cancer, bowel cancer, esophageal cancer, lung cancer, bladder cancer, leukemia and other human tumors.

Since its first discovery in 1979, the p53 gene has become an important part of current molecular biology research [2].

The p53 gene is a very important tumor suppressor gene in the human body. It can inhibit the progression of the cell cycle, inhibit cell proliferation, and prevent tumorigenesis by causing apoptosis in damaged cells.

p53 can be divided into wild type and mutant type. Wild-type (wt-p53) protein is an important transcription factor, which blocks cell cycle, induces apoptosis and senescence, participates in DNA damage repair, and inhibits angiogenesis by regulating downstream target genes (p21, Bax, PTEN, p48, PAI, etc.) to prevent the occurrence and development of tumor. The wild-type p53 protein has a short half-life and low content in cells, so it is difficult to detect by immunohistochemistry, while the mutant p53 protein has a high content in cells and a long half-life, which can be detected by immunohistochemistry. Mutant p53 protein promotes the development of cancer.

p53 gene, located on the short arm of human chromosome 17, is about 20kb in length and contains 11 exons and 10 introns. Its mRNA length is 2500bp. It consists of 393 amino acids with a molecular weight of 53kD. p53 protein can be detected in almost all somatic cells. 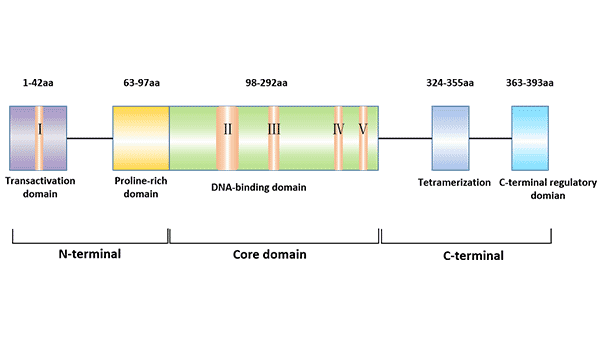 Figure 1 The structure of p53 protein

The spatial structure of p53 protein determines its biological function.

In human dermal fibroblasts, Gld2 regulates the expression of cytoplasmic polyadenylation element binding protein (CPEB) by regulating the stability of miR-122, whereas CPEB can The 3'-UTR binding of the p53 gene then recruits Gld4 to maintain p53 mRNA polyadenylation and transcription [5].

In addition, p53 can also bind directly to the ends and damage sites of DNA, thereby being phosphorylated or receiving other signals to generate activity. In addition to DNA damage, tissue hypoxia also increases and activates p53 concentration.

p53 gene has the function of blocking cell cycle. The expression or ectopic expression of p53 after DNA damage keeps the cell cycle at the G1/S test point. 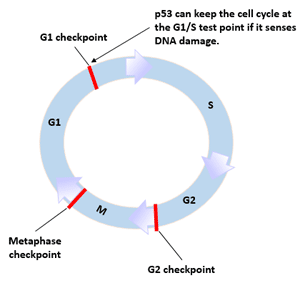 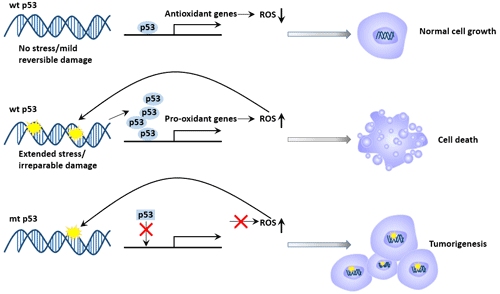 Cell senescence can inhibit the occurrence of cell carcinogenesis, which is mainly regulated by two pathways, p53 and p16/Rb. Cell senescence induced by p53 pathway can be activated by RAS mitotic signaling such as telomerase inactivation and reactive oxygen stimulation.

The metabolic regulation of p53 on the body is mainly manifested in three aspects:

Tumor suppressor p53 plays an important role in tumor suppression due to its regulation of cell cycle and the promotion of apoptosis to prevent the emergence of mutant cells. p53 can participate in the apoptosis caused by the virus, thereby inhibiting the replication and spread of the virus. p53 can participate in innate immunity, acquired immunity and inflammatory response to play an antiviral role.

4. The Relationship between p53 and Related Genes

Mdm2 is an evolutionarily conserved gene with transcription factor function. It binds to wild-type (wt) or mutant (mt) p53, which inhibits p53 function, thereby arresting the G1 phase of the cell and re-entering the cell cycle. It is believed that p53 protein binds to mdm2 protein to form oligodimer complex, and overexpressed mdm2 inhibits p53 transcriptional activity; wild-type p53 expression in turn affects mdm2 protein expression in the same cell. There is a mutual regulation mechanism in regulating cell division and proliferation.

The p21WAF1/CIP1 gene encodes a cyclin-dependent kinase inhibitory protein (CDKI) that is involved in cell growth, differentiation, senescence, and death by regulating cell cycle progression. As a direct downstream target gene of p53, p21WAF1 is a key gene involved in cell cycle regulation regulated by p53, and can perform part of the function of p53.

Both p53 and p21 are involved in cellular DNA damage repair. When the DNA of the cell is damaged, the p53 protein accumulates, and the expression of p21 gene is up-regulated, and the cell is arrested in the G1 phase. Mutual regulation of p53 and p21 is necessary to arrest damaged cells in both G1 and G2 phases.

5. The Anticancer Mechanism of p53 Gene

The occurrence of tumors is mainly caused by the disorder of cell cycle regulation. Apoptosis and senescence are two tumor suppressor pathways in cells, and the p53 gene plays an important role in both aspects.

Wild-type p53 protein can bind to DNA of specific sequences, activate the transcriptional activity of gene promoters containing p53 response elements, inhibit the transcriptional activity of gene promoters without p53 response elements [12], and inhibit DNA replication. Wild-type p53 prevents cells from remaining in the G1 or G0 phase, allowing enough time for damaged DNA to be repaired. If it cannot be repaired, programmed death will occur in cells with DNA damage [13].

The function of p53 is affected by many factors, including cell differentiation, cell senescence, DNA damage and hypoxia. The activation of p53 by cells mainly increases the expression and stability of p53, changes the cell localization of p53, and increases its biological activity.

Intracellular localization of p53: When stimulated, p53 enters the nucleus via microtubules and dynein, a process that relies primarily on its C-terminal nuclear import sequence [15]. When p53 is to be degraded, it needs to be transported out of the nucleus for effective degradation by combining MDM2 with its c-terminal nuclear output sequence [16] [17]. 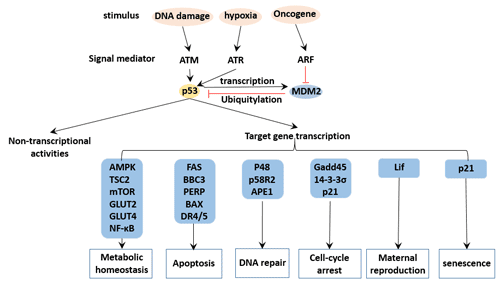 6.1 Application of p53 in Gene Therapy

The important role of p53 in tumor suppression makes p53 and its complexes a target for the development of new anticancer drugs.

As for the application of p53 gene in tumor gene therapy, adenovirus is the most commonly used vector to introduce normal wild-type p53 gene into tumor cells to replace the mutant p53 gene. A large number of studies have shown that adenovirus-mediated p53 gene infection can effectively control tumor cell growth or induce apoptosis. In addition, non-viral vector liposomes are also considered as a potential therapeutic vector.

6.2 Application of p53 Gene in Cancer

The monitoring of p53 gene provides a basis for the early diagnosis and prediction of tumors, and can make scientific inference on the occurrence, development and prognosis of tumors. The detection methods mainly include: