Dual Role of TNFRSF14 in Immunology 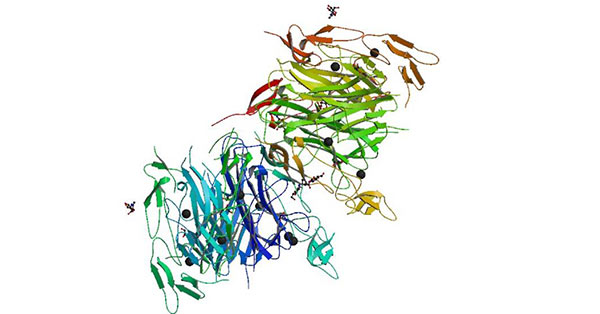 Figure 1 Crystal structure of the LIGHT and HVEM complex

1. The Discovery of TNFRSF14

2. The Structure of TNFRSF14

4. The Distribution of TNFRSF14

1. The Discovery of TNFRSF14

TNFRSF14 is a member identified from the TNFR family EST (expressed sequence tag) database. It is a member of tumor necrosis factor/nerve growth factor (TNF/NGF) receptor family screened from the cDNA library of CHO cells by Montgomery in 1996 [1]. It is named for its ability to regulate the entry of herpes simplex virus (HSV)-1 into human cells.

2. The Structure of TNFRSF14

Unlike some TNFRSF members, HEVM has no death domain in the intracellular region, but has a PXQT short peptide that binds to multiple TNFR-related factors [4], which transmitting signals to the intracellular and activating NF-κB and AP1 transcription factors, which is believed to be beneficial to the survival of T cells in the body and mediating inflammatory responses.

HSV-gD is an enveloping glycoprotein D of HSV, which plays an important role in the infection of HSV on target cells. HSV-1 can infect activated T cells, immature and mature DCs by binding the protein to HVEM on target cells.

The extracellular segment of HVEM contains four CRDs. Both LIGHT and LT alpha bind to HVEM via CRD2 and CRD3 [5]. The binding of LIGHT and HVEM was almost unaffected under the condition of high salt concentration, and it was speculated that their binding was mainly hydrophobic bond and hydrogen bond. HSV1 gD was initially considered to be able to competitively bind to HVEM with LIGHT [6], but subsequent studies showed that HSV1-gD mainly binds to CRD1 of HVEM, which was significantly different from the binding site of LIGHT [7]. Moreover, the binding site of HSV1-gD is outside the trimer of HVEM molecule, while LIGHT binds inside the trimer of HVEM. 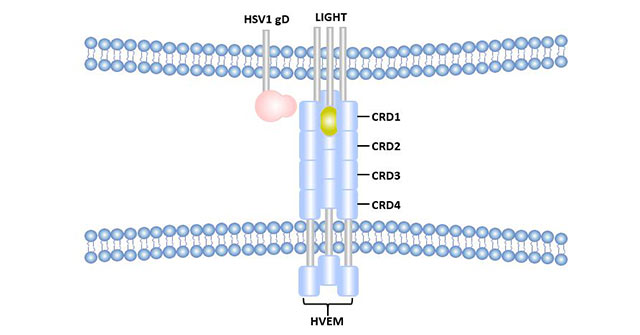 The site where HVEM binds to BTLA includes CRD1. The site of human BTLA binding to HVEM mostly overlaps with HSV1-gD, but is not identical. Binding of BTLA to HVEM can be blocked by the addition of soluble HSV1-gD [8].

4. The Distribution of TNFRSF14

HVEM is mainly expressed in hematopoietic and lymphoid tissues such as the spleen, thymus and lymph nodes. Studies have shown that HVEM mRNA has a high levels in the lung, spleen and thymus, and is weakly expressed in bone marrow and endothelial cells, but not in brain, liver and skeletal muscle. HVEM can be expressed in a variety of cells such as T lymphocytes, B lymphocytes and immature dendritic cells [9].

HVEM was highly expressed on T cells at the beginning, decreased during activation, and re-expressed on the cell surface at the end of activation.

HVEM plays an important role in the pathogenesis of HSV. HVEM can bind to HSV-gD, mediating the transmembrane process of HSV infected cells. So using anti-HVEM antibodies can block the virus from entering humans. In addition, HSV-gD combined with HVEM can also inhibit the proliferation of T cells and the activation of NF-kappaB. 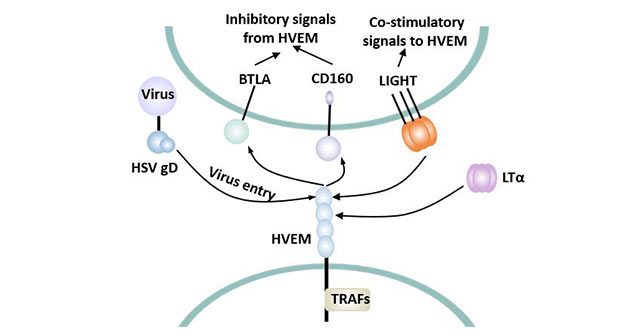 HVEM interacts with LIGHT through the CRD2 and CRD3 domains to generate a CD28-independent costimulatory pathway. The combination of LIGHT and HVEM acts as a costimulatory signal for T cell activation, mainly in the clonal expansion phase of T cell activation, inducing a Th1-type immune response and eliciting a specific CD8+ CTL response [10]. LIGHT binds to its receptor HVEM and has the functions of co-stimulating T lymphocytes and inducing tumor cell apoptosis. HVEM expressed on NK cells can bind to LIGHT to exert an anti-tumor effect [11].

HVEM also has the function of stimulating B cells. High expression of HVEM on B cells binds to LIGHT on activated T cells can enhance the activation function of B cells, thus regulating the secretion of antibodies.

As a second signal of lymphocyte activation, HVEM stimulates T cell proliferation. On the contrary, it also has the ability to negatively regulate T cell responses [13].

HVEM can bind to BTLA and induce its tyrosine phosphorylation, so as to exert inhibitory function and reduce the proliferation ability of antigen-initiating T cells [14].

The BTLA cytoplasmic region contains a site that may recruit growth factor receptor bound protein 2, an ITIM, and a switch motif. BTLA binds to HVEM to phosphorylate tyrosine, and two ITIM recruit tyrosine phosphatases SHP1 and SHP2 [15]. However, the downstream molecules of SHP1 and SHP2 are unknown.

Which is dominant, the co-stimulus signal or the co-inhibitory signal? It depends on ligand/receptor affinity, different stages of cell differentiation, cell type, etc.

The cytoplasmic region of HVEM binds to members of the TNF receptor-associated factor (TRAF) family and may mediate signaling pathways that activate the immune response [16].

TRAFs that bind to the cytoplasmic region of HVEM include TRAF1, TRAF2, TRAF3 and TRAF5.

HVEM binds to and activates TRAF2 and TRAF5 [17], inducing activation of NF-κB and JNK/AP-1 signaling pathways, thereby inducing expression of related genes, resulting in cell survival, cytokine production, or cell proliferation. In this signaling pathway, TRAF2 binds to HVEM, which activates NF-κB by NF-κB-inducible kinase (NIK). NIK allows IKK-1 and IKK-2 to phosphorylate the IκB subunit in the IκB-NF-κB complex. Phosphorylated IκB releases activated NF-κB and enters the nucleus to activate transcription of the gene. 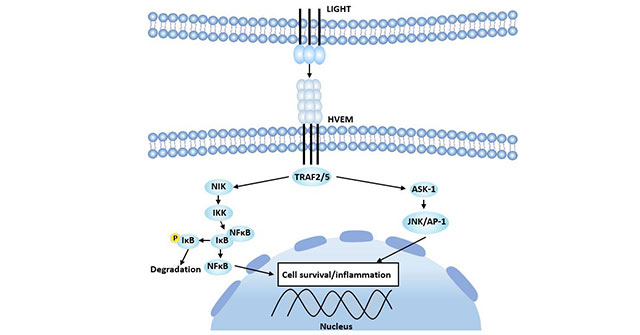 The HVEM-LIGHT signaling pathway is closely related to the development of inflammation and autoimmune diseases.

Autoimmune disease (AID) is characterized by lymphocyte mutations, abnormal activation and expansion of autoreactive T and B lymphocytes, and release of a large number of cytokines and inflammatory mediators.

Autoimmune diseases are caused by excessive activation of T and B cells. The LIGHT-HVEM pathway is an important signal pathway for T cell co-stimulation. The binding of HVEM-LIGHT plays a role in the pathogenesis of autoimmune diabetes.

The LIGHT-HEVM signaling pathway plays an important role in the immunological regulation of autoimmune hepatitis, insulin-dependent diabetes mellitus, rheumatoid arthritis and other autoimmune diseases by participating in the activation of T cells.

HVEM in monocytes and neutrophils combined with LIGHT can improve the bactericidal ability of Listeria monocytogenes and staphylococcus [18].

Mutations in this gene are associated with cases of diffuse large B-cell lymphoma.

The HVEM-LIGHT interaction enhances phagocytosis and plays a role in the antibacterial inflammatory process.

HVEM may also be involved in the formation of atherosclerotic plaques [19].

It is known that HVEM plays an important role in some neoplastic diseases, autoimmune diseases and organ transplantation.

Light-HVEM acts as a co-activation signal, and its deficiency can cause T cell tolerance. Reasonable blocking of some co-stimulation pathways of T cells has good effect on the treatment of autoimmune diseases [21].

Inhibition or blocking of the LIGHT-HVEM signaling pathway results in an unresponsive state or a low-reaction state of the T cell, which makes it lose the ability to respond to allogeneic antigen stimulation, thereby achieving the purpose of suppressing the immune response. How to block the LIGHT-HVEM signal path? It has been demonstrated in vitro experiments that blocking LIGHT-HVEM by soluble HVEM-Fc, LTβR-Fc fusion protein or HVEM antibody [22] can effectively reduce the response of heterologous T cells.

The importance of HVEM is increasingly. In the future, HVEM may be applied in many clinical fields such as autoimmune diseases, transplant rejection, cardiovascular and cerebrovascular diseases, and malignant tumors.