The Overview of Coagulation

Coagulation, also known as clotting, is the process by which blood changes from a liquid to a gel and form a blood clot. The formation of a clot is often referred to as secondary hemostasis, because it forms the second stage in the process of arresting the loss of blood from a ruptured vessel. The first stage, primary hemostasis, is characterized by blood vessel constriction and platelet aggregation at the site of vessel injury. The mechanism of coagulation involves activation, adhesion, and aggregation of platelets along with deposition and maturation of fibrin. Disorders of coagulation are disease states which can result in bleeding or obstructive clotting (thrombosis).

1. The Function of Coagulation

4. The Related Disease of Coagulation

1. The Function of Coagulation

Coagulation is the biological process by which blood transforms into solid form. The critical function of coagulation mainly includes two points. One is to seal any breach of a human body’s primary organ of protection against harmful, external agents such as germs - the skin, and another is to maintain the closed circuit integrity necessary for the body to deliver oxygen and nutrients to all of its tissues via the circulatory system. As well as the process is common to many nonhuman animals, and can be thought of as nature's version of a bandage.

Table 1. the family of coagulation factors

Cascade, as its name means, is a series of steps or stages (as of a physiological process) which, once initiated, continues to the final step because each step is triggered by the preceding one, resulting in amplification of the signal, information, or effect at each stage. A coagulation cascade is the series of steps beginning with activation of the contact activation pathway of coagulation or tissue factor pathways of coagulation, or of one of the related alternative pathways, and proceeding through the common pathway of coagulation to the formation of the fibrin clot. The contact activation pathway of coagulation forms clots in response to abnormalities in the wall of a blood vessel in the absence of tissue injury. And tissue factor pathway activates clotting as a result of tissue injury. The two pathways start differently and then both progress to the final common pathway. Both pathways depend on multiple clotting factors (shown in Table 2). These clotting factors are present in the body in inactive forms until they are activated during the coagulation cascade. The connection among of three pathway is shown in the Fig. 1. 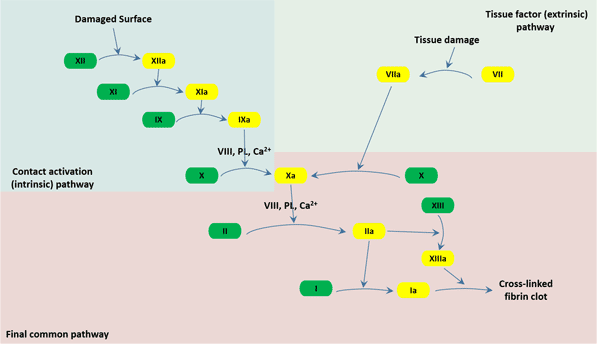 Tissue factor pathway, also known as extrinsic pathway, is the most frequent and most familiar of the two pathways of the coagulation cascade. When a tissue damage such as a cut or a contusion causes bleeding, VII leaves the circulation combines with a glycoprotein, which called tissue factor (TF), expressed on tissue-factor-bearing cells to form an activated complex (TF-VIIa). Then TF-VIIa activates IX and X. Next, factor VIIa then cleaves factor X molecules circulating in the blood to form factor Xa. From this point on, the tissue factor and contact activation pathways are the same and are known as the combined pathway[1].

The contact activation of the coagulation cascade begins when blood comes into contact with the collagen in the damaged wall of a blood vessel and forms the primary complex on collagen by high-molecular-weight kininogen (HMWK), prekallikrein, and XII. This causes factor XII, the Hageman factor, converting into its factor XIIa. Factor XIIa actives factor XI into factor XIa, which converts factor IX into factor IXa. Hemophilia B is a genetic bleeding disorder characterized by a deficiency in factor IX. Factor IXa converts factor X into factor Xa; this is the point at which the intrinsic pathway joins the combined pathway[2].

In the final common pathway, also called the combined pathway, factor Xa activates factor II to form factor IIa (thrombin). Thrombin activates the blood's platelets and leads them to gather together at the affected site and form a platelet plug. A substance, which named von Willebrand factor (vWF), makes it possible for platelets to stick to the injured site. A deficiency of vWF causes von Willebrand disease, the most common inherited bleeding disorder.

4. The Related Disease of Coagulation

Coagulation disorders are disruptions in the body's ability to control blood clotting. The most commonly known coagulation disorder is hemophilia (PWH), a condition in which a critical component of blood coagulation is missing, causing individuals to bleed for long periods of time before clotting occurs. There are numerous other coagulation disorders stemming from a variety of causes. Emerging evidence revealed that a diversity of coagulation disorders in cancer patients arise from tumor-specific growth characteristics, defective myelopoiesis, hypoproteinemia, neoangiogenesis with impaired endothelial lining, or metastatic lesions growth with organ dysfunction[3]. Besides that, recent investigations have discovered a clinically relevant correlation of coagulation disorders and tumor growth. About treatment in persons with hemophilia, the current standard treatment is prophylaxis, given intravenously twice or thrice weekly, which is associated with a non-negligible burden on patients' quality of life[4]. Furthermore, Swystun LL's team have found a gene therapy for coagulation disorders[5].

Platelet disorders, also called thrombocyte disorders, mainly involves three types of disorders, including an abnormal increase in platelets (thrombocythemia and reactive thrombocytosis), a decrease in platelets (thrombocytopenia) and platelet dysfunction. Platelets are little pieces of blood cells. The primary function of platelet is to help wounds heal and prevent bleeding by forming blood clots. And the platelet derives from bone marrow. If your blood has a low concentration of platelets, you may have a higher risk of mild to serious bleeding. While if your blood has too many platelets, it may increase your risk of blood clots. Besides that, platelet dysfunction means that the platelet do not work as they should. For instance, in von Willebrand Disease, the platelets cannot stick together or attach to blood vessel walls well so that excessive bleeding. Recently, accumulating evidence have demonstrated that inherited platelet disorders can be diagnosed rapidly by high-throughput sequencing[6][7][8].

Over 150 years ago, Anatomic pathology studies revealed that excessive activation of coagulation occurs in the setting of inﬂammation[9]. But the molecular mechanisms by which these systems interact doesn't delineate until recent decades. Although viewed separately, coagulation and inﬂammation are highly integrated, delicately balanced biological systems with extensive cross talk that optimizes the organism's response to injury and invasion by pathogens. In this section, we highlight some key molecular interactions between them, some of which are already showing promise as therapeutic targets for inﬂammatory and thrombotic disorders. 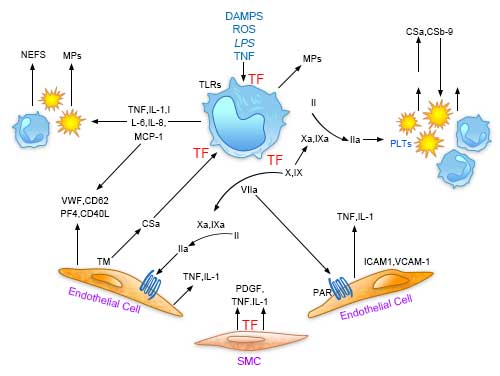 Fig. 2. Central role of tissue factor (TF) in the interplay between coagulation and inﬂammation. 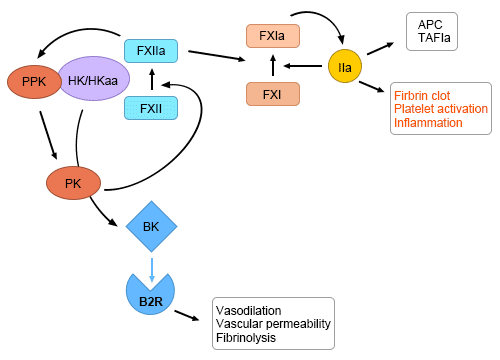 Fig.3. Factor XII activation at the nexus of coagulation and inﬂammation.

Besides that, if you want to obtain the more information about interactions, please click here to view the details.

Coagulation is a dynamic process and the understanding of the blood coagulation system has evolved over the recent years in anaesthetic practice. In the rest section of this article, we introduce two related clinical applications of coagulation.

Coagulation tests are similar to most blood tests. Side effects and risks are minimal. A medical professional will take a blood sample and send it to a laboratory for testing and analysis. Conditions that can cause coagulation problems include liver disease, thrombophilia, which is excessive clotting, and hemophilia, which is an inability to clot normally. Coagulation tests are useful in monitoring people who take medications that affect clotting ability. Coagulation tests are also sometimes recommended before surgery. There are many types of coagulation tests, including explanations of several of them, including complete blood count (CBC), factor V assay, fibrinogen level, prothrombin time (PT or PT-INR), platelet count, thrombin time and bleeding time.

Coagulation is a tightly controlled biochemical network of reactions that leads to the generation of thrombin [14]. This network includes zymogens, enzymes, co-factors, and inhibitors, which quickly generate thrombin at the site of injury and efficiently eliminate it in the peripheral area. Thrombin-antithrombin complex (TAT) is a small protein molecule complex, several enzymes of the coagulation system can be inactivated. Thrombin-antithrombin complex is a glycoprotein produced by the liver, the 432 amino acids.