Diabetes: What You Need to Know

Diabetes mellitus (DM) is a kind of clinical syndrome caused by insufficient insulin secretion or deficiency of insulin function. It mainly manifested as chronic hyperglycemia and is usually accompanied by a variety of cardiovascular diseases. It can lead to microvasculopathy (retinopathy and nephropathy), macrovascular (cardiovascular disease) and neurological diseases.

With the acceleration of modernization and the change of lifestyle, the prevalence of diabetes is on the rise globally, and the treatment of diabetes become a common problem all over the world.

2. The Harm of Diabetes Mellitus

6. Prevention and Treatment of Diabetes

Diabetes is a global issue, no country is immune from diabetes and the epidemic is expected to continue. In this new edition of the IDF Diabetes Atlas, the prevalence of diabetes are estimated for the years 2017 and 2045.

The number of diabetics worldwide is estimated at 425 million in 2017 and is expected to reach 629 million by 2045. The global average prevalence of diabetes is 48 %. The estimates are provided for seven IDF regions: Africa (AFR), Europe (EUR), Middle East and North Africa (MENA), North America and Caribbean (NAC), South and Central America (SACA), South-East Asia (SEA) and the Western Pacific (WP).

Currently, the area with the highest prevalence is the western Pacific, but the growth rate is relatively low. In contrast, the prevalence of diabetes are low in Africa, with only 16 million people in 2017. But its growth rate is as high as 156 percent. The specific data is shown in figure 1. 2. The Harm of Diabetes Mellitus

The main symptoms of diabetes include polydipsia, polyphagia, polyuria, cynorexia, emaciation and fatigue, even accompanied by diabetic ketoacidosis. With the extension of the duration of diabetes, it may cause chronic diseases of the heart, brain, kidney, retina and nervous system. Diabetes mellitus is associated with hypertension, diabetic eye disease, diabetic nephropathy, cerebrovascular disease, cardiovascular disease, diabetic neuropathy, diabetic ketosis, diabetic foot and so on, and almost all organs of the body are harmed. Its clinical manifestation also manifests in protein and fat metabolism disorder. 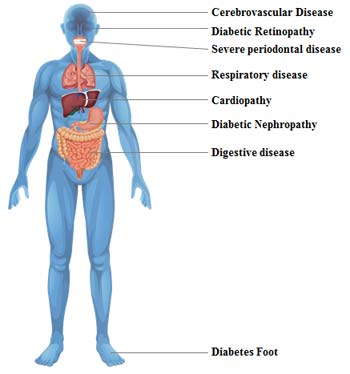 Figure 2. The harm of diabetes mellitus

Type 1 diabetes mellitus (T1DM) also known as insulin dependent diabetes, is a disease of absolute insulin deficiency caused by the destruction of pancreatic cells[2] .Worldwide, the prevalence rate is increasing at an annual rate of 2 % to 3 %[3]. At a low age, the disease increases significantly[4][5]. People with T1DM accounts for only 5 % ~ 10 % of the global diabetes, and type 2 diabetes accounts for the vast majority.

Type 2 diabetes mellitus is an abnormal metabolism of carbohydrates, proteins, and fats resulting from insulin secretion deficiency or insulin deficiency. Type 2 diabetes is generally mild, hidden and has a long course. It is more common in adults, especially the elderly.

Special type diabetes mellitus mainly refers to some rare types of diabetes, for example, pancreatic diseases. This type of diabetes accounts for less than 1 % to 5 % of all diabetes cases.

At present, the cause of diabetes has not been fully elucidated. Type 2 diabetes mellitus (T2DM) has complicated causes. It is generally believed that its pathogenesis is closely related to genetic and environmental factors.

Environmental factors: Central obesity is the most important environmental factor causing T2DM. Lifestyle and age are also related factors affecting type 2 diabetes (older people are more likely to develop DM), one possible reason is that the ratio of muscle to fat in the body changes as your age and reduce physical activity. Chronic sleep deprivation can promote the development of T2DM, and mental factors are also important factors influencing type 2 diabetes. In addition, the incidence of type 2 diabetes is closely related to infection of some viral infections (such as intestinal virus, coxsackie virus, mumps virus, rubella virus, etc.). Oxidative stress, apoptosis of the oocytes, and inflammatory factors are also the causes of type 2 diabetes. The main reason is that the state of high-sugar and high-fat increases the reactive oxygen species (ROS)[7], weakens the antioxidant capacity of the body and causes a series of pathological changes. These abnormal conditions cause apoptosis of the insulin β cells.

Similar to type 2 diabetes, type 1 diabetes is also linked to heredity, however, more than 85 percent of patients whose first-degree relatives did not have the disease. Human leukocyte antigen (HLA) genes related to type 1 diabetes. In addition, virus infection and chemicals also have certain influence to type 1 diabetes. Therefore, the intensive study of gene-gene, gene-environment and epigenetic inheritance will provide evidence for the early diagnosis and prevention of type 1 diabetes[8].

For different types of diabetes, the diagnostic methods are also different. At present, the five kinds of islet autoantibodies in type 1 diabetes is the most widely used, the most recognised and most relevant immune markers: GADA (glutamic acid decarboxylase antibody), IAA (insulin autoantibodies), ICA (islet cell antibody), ZnT-8A (zinc transporters 8) and IA2A. As important markers for the diagnosis and screening of diabetes, they have important clinical application value and good research prospect in diabetes[10].

6. Prevention and Treatment of Diabetes

The occurrence, development and recurrence of diabetes are influenced by both genetic and environmental factors. Research on diabetes treatment focuses on diet, exercise and drug therapy.

It mainly controls the intake of sugar in the diet or edibles food with hypoglycemic effect, such as tender pumpkin, green tea, wolfberry, etc. Which foods are the best for controlling diabetes? These foods can help you balance your blood sugar: olive oil, cinnamon, green tea, beans, greens and oats.

Obesity caused by reduced physical activity is the most important factors that lead to diabetes. Exercise helps prevent diabetes. Exercise is often recommended as a non-drug treatment for both type 1 and type 2 diabetes. Exercise can improve the sensitivity of insulin and reduce body fat, thus increases the body's absorption of glucose. For type I diabetes, patients should exercise moderately. The moderate intensity exercise is easy to obtain the better exercise treatment effect. Strenuous exercise is difficult to control and can lead to hyperglycemia, hypotension, thermoregulation disorders and neuropathy.

Drug therapy mainly uses hypoglycemic drugs to reduce blood sugar to a reasonable range, so as to achieve the purpose of treating diabetes. Current drugs include insulin and its analogues, insulin secreting drugs, drugs that reduce or delay carbohydrate metabolism and absorption, and insulin agonist. 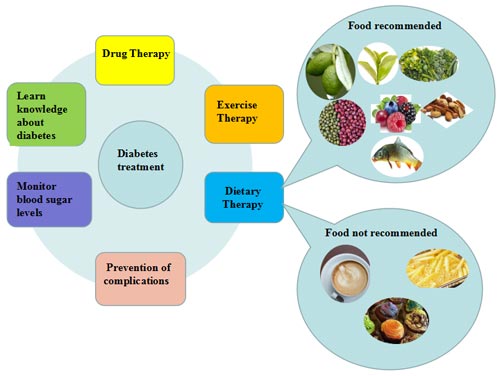 Insulin pump is also used in diabetes treatment, which can simulate the physiological release of normal insulin and make it close to the physiological diurnal insulin level to the maximum extent. In addition, new breakthroughs have been made in transgenic therapy, insulin sensitization effect, insulin three-dimensional structure, comprehensive prevention and treatment system of diabetes, surgery and stem cell therapy.

Previously, in the international academic journal nature medicine, researchers from the Netherlands published new research using cryotherapy for diabetics, finding that patients had a 43% increase in peripheral insulin sensitivity. This shows that the cryotherapy diabetes has a good prospect.

There are other research about cryotherapy and diabetes. In proliferative diabetic retinopathy (PDR), it seems that cryotherapy combined with photocoagulation might be a helpful adjunct procedure in PDR and to prevent recurrent vitreous hemorrhage. But little research has been done on cryotherapy type 1 diabetes. Is cryotherapy safe for diabetics? Recent reports suggest that cryotherapy is not recommended for people with diabetes or other nerve conditions, as it might result in further nerve damage.

In general, the prevention of diabetes needs to pay attention to the following points:

a. Avoid environmental triggers such as milk, cereal, and take a supplement of n-3 fatty acids or vitamin D;

b. Use vaccines that target specific antibodies, such as insulin, proinsulin or insulin analogues, and GAD65 or HSP60;

d. Metabolic adjustment, such as weight loss, physical exercise and so on [12].

Recent studies have shown that protein kinase C (PKC) pathways, oxidative stress, growth factors, osmotic pressure and stretch stimulation in diabetes can all activate the MAPK family, increase the activity of transcription factors and participate in the development of chronic complications of diabetes. P38 mitogen-activated protein kinase (MAPK) is an important member of the MAPKs superfamily[13]. It is the junction of cell signaling pathways and plays an important role in cell metabolism, proliferation, differentiation and apoptosis.

In the diabetic nephropathies (DN), p38 MAPK can be activated by a variety of factors and then promote cell proliferation and extracellular matrix synthesis, increase production of class reactive oxygen species (ROS). Osman et al[14] found that activation of p38 MAPK can increase ROS production and promote the development of DN. This signal can also promote the formation of osteopontin (OPN)[15] and promote the schizolysis and shedding of Kidney injury molecule-1 (KIM-1). MAPK is associated with diabetic vascular complications and diabetic neuropathy. With the further study of the relationship between MAPK family and diabetic complications, blocking MAPK signaling pathways may become a new strategy for the treatment of diabetic complications. MAPK may become a new target for the treatment of chronic complications of diabetes.

With the acceleration of modernization and the change of lifestyle, the prevalence of diabetes has been on the rise globally, and the treatment of diabetes has become one of the hot issues, while the complications caused by diabetes have also attracted wide attention.

Andrew Devon Gordon et al examined the role of Malat1, a highly conserved nuclear long non-coding RNA molecule, in chronic diabetic complications affecting the heart and kidneys using both in vitro and in vivo models: human endothelial cell culture and a Malat1 knockout mice model. This study demonstrated the importance of Malat1 in the pathogenesis of chronic diabetes complications involving heart and kidney[16]. David et al assessed the effect of replacing carbohydrate consumption with mixed nut consumption, as a source of unsaturated fat, on cardiovascular risk factors and HbA1c in type 2 diabetes. As a substitute for carbohydrate intake, nutin can improves glycaemic control and lipid risk factors in individuals with type 2 diabetes. Increased consumption of mixed nuts had a positive effect on HbAlc, LDL-C and ApoB levels. These data provide a special food option for type 2 diabetics who wish to reduce the amount of carbohydrates in their diet[17].

Foreign researchers have used embryonic stem cells of experimental mice to cultivate islet cells efficiently and transplanted them into diabetic mouse, and the treatment of diabetes has achieved satisfactory results[18].