A Resume for Transmembrane Proteins 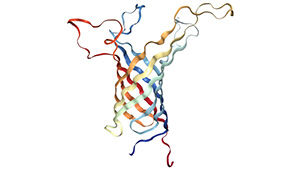 Figure 1 The structure of outer membrane protein A transmembrane domain

It can also be classified according to the position of its N-terminal and C-terminal domains.

Type I transmembrane proteins are anchored to the lipid membrane by stop-transport anchoring sequences, and their N-terminal domains target the endoplasmic reticulum cavity during synthesis. 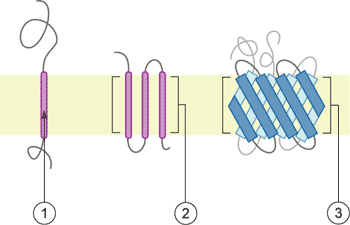 Note: This image is from wikipedia

For example, it is a receptor for various signaling molecules, hormones and other substrates; it is involved in the exchange of substances, energy and signal between the inside and outside of the cell membrane; it constitutes a channel for various ion transmembranes, which inputs nutrients and some inorganic electrolytes into cells, and discharges toxic or useless metabolites into cells; and it constitutes respiratory chains and transporters.

Figure 3 The function of transmembrane proteins

IFITM1 is a member of the interferon-induced transmembrane protein family, and its gene product is one of the leukocyte antigens involved in the transmission of anti-proliferation and homogenous anti-adhesion signal complexes on lymphocytes [2]. Studies have found that IFITM protein can help inhibit viral infection caused by viral bacteria in the cell, which is the most effective method for HIV transmission [3]. IFITM proteins, especially IFITM2 and IFITM3, block HIV cell-to-cell transmission. IFITM proteins often affect the lipid properties of cell membranes and impede the fusion of different viruses with host cells.

In recent years, studies on high expression of IFITM1 have reported in colon cancer, lung cancer, rectal cancer, gastric cancer and head and neck squamous cell carcinoma. Its role in the occurrence, proliferation and invasion of malignant tumors is attracting more and more attention. Studies on gene expression analysis of ovarian cancer showed that IFITM1 was the most promising new molecular marker [4].

Experiments show that [5] IFITM1 mRNA is overexpressed in both early and late stages of murine and human intestinal tumors. In humans, its mechanism is activated by Wnt/β-catenin signaling pathway, and IFITM1 is a candidate target gene. It can be used as a genetic marker for clinical diagnosis of colorectal cancer.

AIDS is an acquired immune deficiency syndrome (AIDS) caused by human immune deficiency virus (HIV) infection. Early diagnosis of AIDS allows patients to be treated early and prevents further spread of HIV. High purity specific HIV antigen is necessary for the development of HIV diagnostic kit. The transmembrane protein Gp41 is a key protein in the fusion process between the HIV-1 envelope and the target cell membrane. Gp41 is exposed to the surface of HIV and is the dominant epitope for inducing antibodies in the body. It is therefore the preferred target for HIV antibody detection and an epitope for protein vaccine development [6] [7].

Gp41, with a conserved sequence and no homology with human proteins, is considered to be an ideal target for HIV-1 fusion inhibitors. Currently, the developed peptides hiv-1 fusion inhibitor Fuzeon (enfuvirtide, T-20) targeting Gp41 has been approved by FDA, which is the first and the only anti-HIV-l fusion inhibitor applied in clinical practice.

The four-pass transmembrane protein is a protein that can be linked to intramembrane-transmembrane and extramembranous proteins, and plays the role of connecting biological signals inside and outside the membrane. CD151 is one of the important members of the four-transmembrane protein superfamily, which has been confirmed to play an important role in the invasion and metastasis of liver cancer, and the overexpression of CD151 can promote the invasion and metastasis of liver cancer [8].

Tetraspanins are evolutionarily highly conserved four-time transmembrane proteins that interact with surrounding molecules to form a broad molecular network of interactions, namely four transmembrane protein networks (TEMs). Tetraspanins are associated with the pathogenesis of malignant tumors, the immune system, and infectious diseases, so they have become potential targets for the treatment of these diseases. It is currently known that TEMs can provide access to or exit for human papillomavirus (HPV) and human immunodeficiency virus (HIV) [9] and other viruses [10] [11].

CD81, a member of the Tetraspanins family, is a four-transmembrane protein molecule with multiple biological activities. It plays a role in many different cell types, such as brain development, retinal pigment epithelial cell development and fertilization.

In Drosophila, a large transmembrane protein uninflatable (Uif) with EGF like repeats is shown to combat classical Notch signals [13].

There are several advantages to properly integrating membrane proteins into vesicles:

The cell-free protein expression system is particularly suitable for the expression of transmembrane proteins and toxic proteins. In recent years, proteins that are difficult to express by conventional intracellular means have been successfully expressed in cells in vitro [16] [17] [18].

Cell-free technology can easily and controllably add a variety of unnatural amino acids to achieve complex modification processes that are difficult to solve after conventional recombinant expression [19]. Cell-free protein expression systems have high application value and potential for drug delivery and vaccine development using viroid-like particle VLPs. A large number of membrane proteins have been successfully expressed in cells free.

CUSABIO's cell-free expression platform can provide you with complete technical services. It can solve specific problems related to protein expression, such as low protein yield, expression of special proteins (such as membrane proteins, toxic proteins, etc.), protein complexes production, parallel synthesis of many different proteins. We have successfully expressed many transmembrane proteins, please refer to the specific content:

There are some features of cell-free protein expression systems as follows:

Based on these advantages, CUSABIO can express 36000+ multiple transmembrane proteins, mainly including: