Receptor tyrosine kinase (RTKs) is a type I transmembrane glycoprotein that regulates cell growth, differentiation and migration. The Eph receptor family (erythropoietin-producing human hepatocellular carcinoma) is the largest RTKs family, which is highly conserved in structure and has many members [1].

EphA3(formerly known as HEK) is a member of Eph receptor family, and its abnormal changes are closely related to the occurrence and development of various tumors [2][3], which may cause changes in cell morphological characteristics and biological characteristics, such as cell growth and survival rate, cell adhesion, cell migration and anti-apoptotic ability.

5. The Function of EphA3

In 1987, Hirai et al. cloned EphA1, the first member of Eph gene family [4]. So far, in humans, Eph gene family has been found to have 14 members [5], which are widely distributed in normal tissues and tumor cells.

The EphA3 receptor was originally a surface antigen isolated from the pre-B lymphocytic leukemia cell surface (ALL) cell line (LK63) [6].

According to the homology, expression, distribution and binding properties of the Eph receptor family, they are divided into two subclasses: EphA (EphA1、EphA2、EphA3、EphA4、EphA5、EphA6、EphA7、EphA8、EphA10) and EphB (EphB1、EphB2、EphB3、EphB4、EphB6) receptors.

The EphA3 gene is located in the 3p11.2 region of chromosome 3, which has mutations in many different tumor tissues.

The extracellular domain includes an N-terminal globular domain (Glb), a cysteine-rich junction region consisting of a Sushi domain and an EGF-like domain and two fibronectin type III repeat regions. A globular domain is a key domain in which a ligand binds to a receptor, and determines the binding property of the receptor to the ligand. The mutation of the domain can destroy the ability of the anti-EphA3 monoclonal antibody to bind to the receptor.

SAM domain is highly conserved in Eph protein family, and tyrosine residues in SAM structure are necessary sites for aggregation of receptor signaling molecules [8]. SAM domain removal reduces the ability of EphA3 mutants to form dimers, and its phosphorylation level and kinase activity are affected [9]. 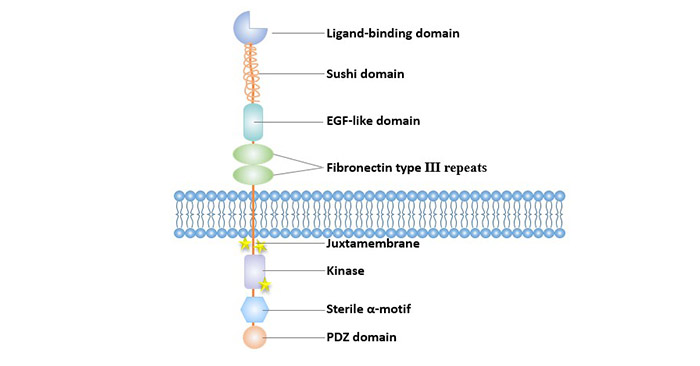 The ligands for EphA3: Ephrin-B2 and Ephrin-A5. The ligands can be divided into two subtypes, Ephrin-A and Ephrin-B, depending on how they are attached to the cell membrane. The Ephrin-A subtype is anchored to the cell membrane by a glycosylphosphatidylinositol chain, a total of 5 kinds, and Ephrin-B ligands are 3 kinds, belonging to a single transmembrane protein, which is composed of intracellular structure and transmembrane.

The Eph family ligand is only active in the form of a membrane attachment, and the soluble form not only has no activity but actually acts as an antagonist.

EphA3 is highly expressed in various stages of embryonic development of the brain and spinal cord, lung, kidney, heart and muscle tissue [10]. In normal adult tissues, EphA3 is almost absent, and is sparsely expressed in the central nervous system (CNS) [11], relatively high in the retina, and low in the bladder, prostate, uterus and heart [12].

5. The Function of EphA3

Eph-ephrin mediated cellular communication controls the biological functions of cells, such as cell adhesion and de-adhesion, cell shape and movement.

Eph receptors and ligand play important roles in normal cell adhesion, migration, and angiogenesis. Studies show that Eph receptor or ephrin proteins play a role in maintaining the structure of blood vessels, kidneys, intestines and other tissues [17]. In addition, they are closely related to the formation of many tumor blood vessels and are thought to be involved in tumor invasion and metastasis.

Eph-ephrin controls cell localization during normal and carcinogenic development by regulating cell-cell adhesion and de-adhesion, thereby affecting cell development. The Eph/ephrin signals are used in a variety of developmental processes, from gastrula embryogenesis and somatogenesis to vascular and neurological patterns.

Ephs is crucial to the embryological process, especially in the development of the nervous system. For example, EphA3 plays an important role in retinotectal development [18], which is consistent with the high expression of EphA3 in human retina.

EphA3 is expressed in a variety of tumors and is associated with tumor stem cells and angiogenesis.

EphA3 is extensively mutated in cancer, with up to 40 mutations found in solid tumors [19]. Many mutations affect Ephrin binding domains, sushi-like and EGF-like domains (all involved in ligand binding) or kinase domains, and mutations in these domains may lead to abnormalities in positive signal transduction.

Eph overexpression is widely found in stromal tumors, including sarcomas.

EphA3 is also overexpressed in epithelial tumors, including lung and kidney tumors.

Studies have shown that the mutation rate of EphA3 in lung cancer has reached 5%-10%, and the gene is absent in multiple groups of lung cancer tissues [20]. Overexpression of EphA3 can increase the apoptosis rate of tumor cells and G0/G1 phase cell cycle arrest in small cell lung cancer, thereby reducing the resistance to chemotherapy drugs [21].

However, like other Ephs, the role and expression of EphA3 in cancer progression is not always consistent.

In addition, Eph RTKs is involved in many other processes associated with malignant tumors, including changes in tumor microenvironment, which may promote the occurrence of malignant tumors and angiogenesis.

The Eph/Ephrin signaling pathway is outlined as follows: Ligand binding to the extracellular domain of the Eph receptor changes the conformation of the receptor, causing the receptor to migrate and aggregate on the membrane and form oligomerized receptor -ligand complex. The activation of Eph receptor tyrosine kinase leads to autophosphorylation and tyrosine phosphorylation of a large number of downstream intracellular substrate protein molecules, initiating different signaling pathways to transmit signals step by step.

A striking feature of the Eph-ephrin interaction is the phenomenon of bidirectional signaling. 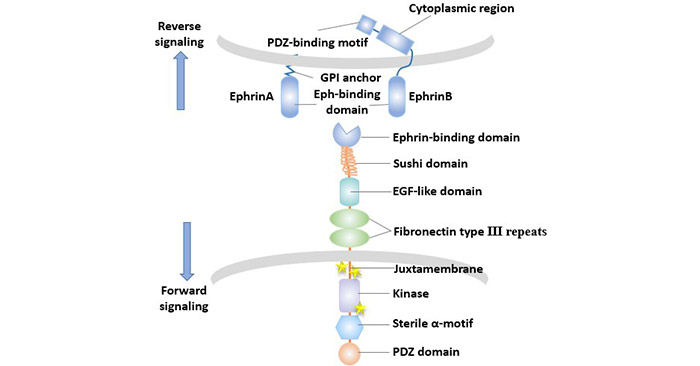 The formation of signal clusters (minimal tetramer) rather than receptor dimerization is a key requirement of Eph-ephrin signaling. Clustering of ephrin ligands is also necessary for Eph signaling. The membrane-bound or cluster ephrin stimulated Eph activity, while the soluble ephrins inhibited Eph activity. For example, ephrin-A5 could antagonize the activation of EphA3 [23].

The CrkII adaptor protein is recruited to the activated kinase domain, which is critical for subsequent signaling cascades, resulting in activation of RhoA GTPases.

Eph RTKs target the cytoskeleton by altering the activation state of the Rho or Ras family GTPase to alter cell adhesion/rejection and cell motility [24].

Rho family GTPases act as downstream signaling molecules of the Eph receptor, and its activation shifts the balance within the Rho family to preferentially activate RhoA, inhibiting Rac1 and Cdc42. Rac1/cdc42 promotes cell movement and promotes the formation of plate foot and filamentous foot in migrating cells, while RhoA inhibits cell movement. This changes the motility of the cells.

Eph can not only mediate the change of cytoskeletal structure, but also promote or inhibit the survival pathway based on Eph RTK phosphorylation.

Eph receptor tyrosine kinases control cell-cell interactions during normal and oncogenic development and involve a range of processes including angiogenesis, stem cell maintenance and metastasis. Eph genes play a role in various mechanisms of tumor progression and, therefore, they can serve as targets for cancer therapy.

Given the role of EphA3 and other Ephs in tumors, considerable efforts have been made to develop Eph inhibitors, including the use of kinase inhibitors.

For EphA3, the primary therapeutic candidate is the monoclonal antibody IIIA4. IIIA4, an IgG1 kappa monoclonal antibody targeting EphA3[6]. It has a high affinity for EphA3. The target of IIIA4 is located at the N-terminus of the extracellular domain of EphA3 adjacent to the ligand binding site. Similar to the ligand, pre-clustered IIIA4 effectively triggers EphA3 activation, cytoskeletal contraction and cell rounding.

IIIA4 was modified with antibody artificial engineering technology to prepare KB004. KB004 has a high affinity for EphA3 and a strong antibody-dependent cytotoxicity (ADCC). It may change the microenvironment, making it unfavorable for tumor growth and proliferation. KB004 is currently being evaluated in phase I/II ClinicalTrials in patients with hematologic malignancies (clinicaltrials. gov identifier: NCT01211691). 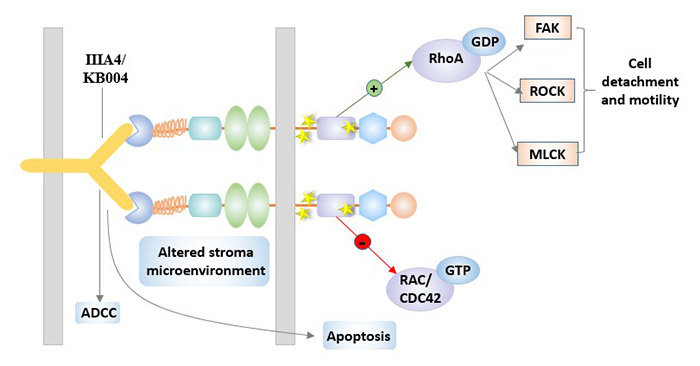